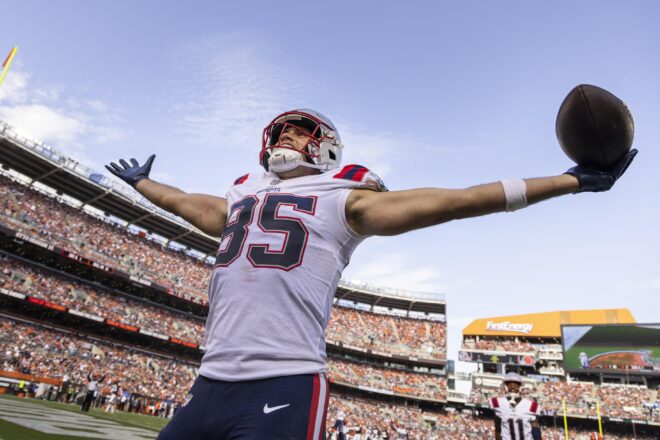 Bailey Zappe was back under center for the New England Patriots in Week 6 and again made the most of the opportunity.

Zappe completed 24 of 28 passes while throwing for a career-high 309 yards and two touchdown passes.

Fellow rookie Tyquan Thornton had a breakout performance of his own, nabbing his first career touchdown reception and adding a rushing score during a jet sweep from 19 yards out.

Running-back Rhamondre Stevenson, who took over as the lead back with Damien Harris out due to injury, rushed for 76 yards on 19 carries and two touchdowns, one of which was a 31-yard dash to the end zone.

The Patriots’ defense continued to be stifling, holding one of the best rushing offenses in the game to just 70 yards and allowing just a single touchdown.

“You can’t win games in this league without good players, so I’ve been very fortunate to coach a lot of great players and have a lot of great coaches through the years,” Belichick said postgame. “A lot of those guys have gone on to great coaching careers and the players, obviously, some are going to the Hall of Fame.”

You can check out all the best social media moments from the Patriots’ 38-15 win below.

From @ESPNStatsInfo: Rhamondre Stevenson's 31-yard rush TD came on 3rd-and-10. It's the first time under Bill Belichick the Patriots have had rush TD on 3rd-and-10 or longer.

It's the 2nd such instance in the NFL this season (Seattle's Rashad Penny, 36-yard TD vs Lions, Week 4)

From @ESPNStatsInfo: Rookie Bailey Zappe's 2-yard TD to rookie Tyquan Thornton marks the first time the Patriots have had a rookie-to-rookie passing TD connection since Week 18 of the 1993 season, when Drew Bledsoe threw a TD to Vincent Brisby.

the rookie recovered a muffed punt and presented the ball to Bill Belichick 😂😂 pic.twitter.com/S4wTdTZ6AI

With a win over the Browns (his former team), Bill Belichick tied George Halas at 324 career wins (incl playoffs), 2nd-most by a head coach all-time

It was also Belichick’s 257th regular season win with NE, tying Don Shula (with MIA) for 2nd-most by a HC with a single team

Huge congrats to Coach Belichick on 2nd all time in wins. I know I do a lot of impressions and give you a hard time but I truly can’t thank you enough for the opportunity you gave me. Congrats coach. 🐐 🎧

Bill Belichick waves to a vocal Pats crowd in Cleveland. He got his 324th win today, tying him with George Halas for 2nd all time. pic.twitter.com/9LR2YggDiA

That QB is Bailey Zappe pic.twitter.com/SzzLA8Bowi

(Adding a key word here that I mistakenly left out)

From @ESPNStatsInfo: Tyquan Thornton is the first ROOKIE Patriots WR with a rushing and receiving TD in the same game since Irving Fryar in 1985 (vs. the Seahawks). https://t.co/3eALAD8K19

One hell of a guy he is huh…

Bill Belichick suggested to players to return to the field before leaving, and take note of five names:

In mentioning those names, Belichick spoke to players about integration, football history/excellence and more.

“Guys making plays all day, that just gives you another boost.”

Patriots players react to the win in Cleveland. pic.twitter.com/Jtbw0fE94f

Fall morning in foxboro after a W! 😊