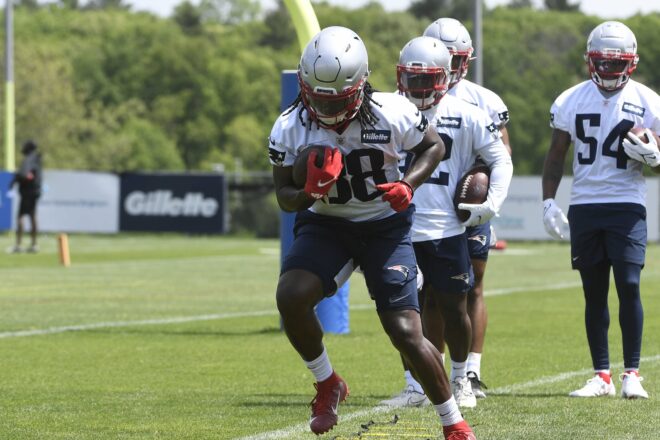 The Patriots kicked off week three of training camp on Monday with the first preseason game against the New York Giants on Thursday.

During Monday’s session, the offense struggled to get much going as Mac Jones completed just 10/17 passes with an interception, and Bailey Zappe finished 7/11 with an interception. A bright spot? Tyquan Thornton put together another strong showing, especially during the 1-on-1 drills against Malcolm Butler and Terrance Mitchell. He really showed off his speed and separation.

In 7-on-7s, DeVante Parker caught a 30-yard touchdown pass from Mac Jones after prying the ball away from Jonathan Jones and Myles Bryant.

After practice, David Andrews had the entire offense gather for what appeared to be a pep talk. Andrews acknowledged work was needed afterward to the media but didn’t specify what was said.

“What I said was what I said”, Andrews stated when asked about the group conversation. “We’re just trying to move forward, try to correct it, and try to come out here and have a better day tomorrow.”

In his after-practice recap, ESPN’s Mike Reiss suggested that former Patriots offensive line coach Dante Scarnecchia should make a visit and review the current state of the offensive line.

Below are social media sights and sounds recapping day ten on Monday.

Tyquan Thornton just toasted Malcolm Butler deep on his first 1-on-1 rep, but the throws took 15 years to reach him and got broken up. Then, Thornton humiliates Terrance Mitchell on a stop-and-go for a deep completion. He's tough.

Mac Jones just threw a rainbow into the back corner of the end zone from about 30 yards out. It was well-placed for DeVante Parker, who went up over Jonathan Jones and Myles Bryant to make the hands catch

A thought after watching the Patriots offense look efficient in 7-on-7 but struggle notably in multiple 11-on-11s: Might be time to give Dante Scarnecchia a call for an independent evaluation.

Bill Belichick with a whistle and a blocking sled. It doesn't get anymore football that that! 🏈 pic.twitter.com/1TdCfxLa6b

Bill Belichick has a quick chat with Johnathan Jones, then takes a crack at the tackling dummy. I bet he'd crush that with a perfect tackle! pic.twitter.com/EAnQMKpImr

A play reflective of a tough day for the Patriots’ offense: To finish 1-on-1s on a “got to have it” play, Mac Jones tries to connect with DeVante Parker in windy conditions — and Joejuan Williams picks it off.

The offense then drops for push-ups. pic.twitter.com/OPKfgSmckk

The Patriots rookie has more to celebrate after losing his man during one-on-one drills today.

Patriots players on competing and building together at #PatsCamp. pic.twitter.com/xY8qmYEc4j

Heading into Tuesday’s practice, the Patriots moved up their scheduled start time from 4:30 to Noon due to stormy weather in the Foxboro area.

Following some words from David Andrews on Monday, the offense put together its strongest showing since the beginning of training camp, especially in the running game. Damien Harris and Rhamondre Stevenson each recorded 30-plus yard gains thanks to holes created by the offensive line.

The most memorable moment of Tuesday was a scrum between David Andrews and Christian Barmore after the whistle during 11-on-11s. Each player would be kicked out of practice, continuing a long-standing training camp policy by Bill Belichick.

The Patriots will hold a private walkthrough Wednesday before welcoming the New York Giants for the preseason opener at 7 pm Thursday.

Terrance Mitchell’s streak is over. Mac Jones was the first player out to practice today, followed by Ty Montgomery

Harvey Langi intercepts Mac Jones in 11v11s. The ball was tipped at the line, bounced off Bourne’s hand and was caught by Langi.

Pierre Strong getting some run here in red zone 11s. Had a nice blitz pickup. #Patriots

LaBryan Ray with another pressure off the edge in 11s. Beat Justin Herron. Alabama UDFA has been making a play a day lately.

David Andrews and Christian Barmore just had an extended scuffle and Barmore is walking to the locker room. Andrews has also walked off but remains on the far corner of the field.

That is a Patriots rule — you fight in practice, you get kicked out.

David Andrews running hills as punishment for fighting with Christian Barmore. We’ll see if he gets to rejoin practice at any point.

Tre Nixon has been open pretty much all practice running underneath routes. Might be the best of the group working that classic #Patriots short route tree. Interested to see how he looks in YAC mode on Thursday night.

Lots of red zone work. The offense was more efficient.

Despite getting kicked out of practice for fighting, David Andrews returned to break down the offense's post-practice huddle. Much shorter address this time, with more smiles from his teammates.

When a fight broke out, Mac Jones ran toward the pile

Jones: “I tried to get in there a little bit.” pic.twitter.com/GOJdu5pQsn

Following DB vs WR’s drill. Looks like offensive players lost and do push-up’s. Later in practice Dave Andrews got in a fight with Christian Barmore. He has had enough of offense losing. #ForeverNE pic.twitter.com/CPToMpzkiz

Kids don’t care how are training camp practice was. They are gonna jump on you lol