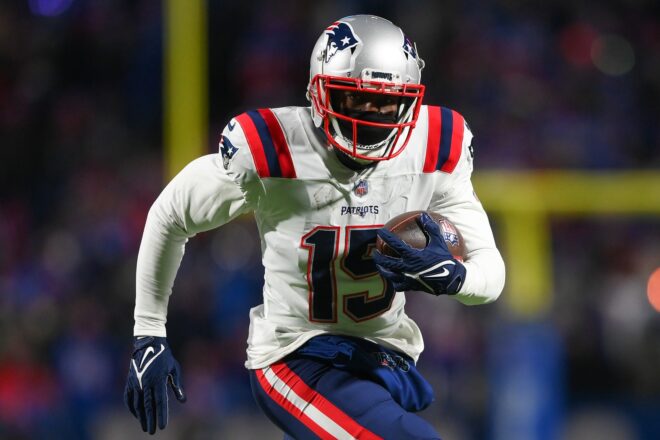 1) Despite carrying a $15 million cap hit heading into 2022, along with the fact the Patriots added DeVante Parker via a trade and drafted Tyquan Thornton, Nelson Agholor doesn’t appear to be too worried about his future.

The addition of Parker seemed to seal the deal for N’Keal Harry, with the former Arizona State receiver likely counting the days until his tenure in New England comes to an end.  But the addition of Thornton created a new problem, adding to a receiver corps that is now so deep, there definitely isn’t room for everybody.

New England currently has Agholor, Kendrick Bourne, Jakobi Meyers, and Parker among the logical top four players heading into the season.  Given the fact they also have Hunter Henry and Jonnu Smith at the tight end position, there’s not a lot of room to really have more than four receivers active.

That means that if the Patriots want to get Thornton on the field this season, someone will have to be on the sidelines or inactive for that to happen.

Agholor, who according to Spotrac has a base salary of $9 million as he heads into the final season of the 2-year deal he signed last offseason, is coming off a disappointing year.  He caught just 38 passes for 491 yards and three touchdowns, finishing with nearly half the number of receptions of Bourne (62 catches, 877 yards, 7 TDs) and well below the 89 receptions and 906 yards of Meyers.

We covered this a couple of days ago, but Agholor and Mac Jones struggled to get on the same page early in the season, including a stretch of three-straight games where Jones was picked off while targeting the veteran.  He was also picked off targeting Agholor in their blowout playoff loss in Buffalo.

But after that point, they started going away from him.  He finished the final 12 regular-season games having been targeted just 36 times with 20 completions for 251 yards and a TD, with his 36 target total coming in the 4th lowest behind Meyers (79), Henry (49), and Bourne (44).  In fact, Brandon Bolden was only one behind him with 35.

All that being said, he didn’t sound worried when he spoke to reporters on Tuesday, saying what happened last season is behind him and he’s looking forward to the upcoming year.

“It’s behind us but I would say it went the way it was supposed to, for me to grow,” said Agholor via BostonSportsJournal.com. “I can’t really look at it any other way. I needed to grow. I needed to adapt. I needed to be able to do what I wanted to do. And I think everything happens for a reason. I’m not gonna get upset about this or that because it’s in the past. What I do have in front of me is a really wonderful opportunity this year, to be who I’m supposed to be in play the way I want to play, so I’m alright with that.”

While it’s great to hear his optimism, it’s definitely going to be an interesting situation to watch heading into this preseason.

2) Our resident Patriots salary cap expert Miguel Benzan recently talked about the current draft class while looking at the financial aspect of things, as the club is in need of obviously getting everyone signed.

According to Benzan, the Patriots currently have the room to sign their bottom seven picks, noting that despite the combined salary totals and salary cap prorations, the Top 51 rule makes it where it will only require just under $2.7 million.

The Patriots currently have enough room to sign their bottom seven picks. Will not take $13M in cap space to sign their entire draft class. Because of the Top 51 rule, it will take less than $2.7M. https://t.co/P0TyNEYkCZ pic.twitter.com/vogSpi4sf5

Benzan currently has the Patriots with just under $800,000 in salary cap space, which will mean that in order to get the rookies under contract, there will still be financial moves coming in order to make that possible.

With minicamps and OTAs upcoming, it’s possible the Patriots will evaluate some of the rookies and potentially make decisions that might affect someone’s future with the team.  Either way, there will either be a roster move or potential restructures that will be coming.  While there’s no immediate need to get all these new players under contract, it will definitely need to happen before training camp.

Late July no longer feels quite as far away, and it certainly looks a lot more intriguing than it did a few weeks ago.

3) Looking closer at rookie running back Pierre Strong Jr., it’s tough not to wonder how he’s going to factor into the mix by the time training camp is over.

While he’s yet to hit the field with the team, the more you see of this kid on film, the more excited you sort of get when you take into consideration that the Patriots have yet another extremely talented player in their backfield.

One thing that stands out is the fact Strong’s ability in the open field is deadly.  He accelerates quickly and because he’s so strong, he doesn’t go down on first contact.  So if he’s into the second level and it requires a defensive back to take him down, that’s an unbelievable edge because the odds of that happening tend to go in his favor.

You can’t arm-tackle him.  And if he gets out into space, you can’t catch him, either.

Bill Belichick has been favoring larger, more physical backs in recent years, with Damien Harris and Rhamondre Stevenson as two players that have completely changed the look and feel of their backfield.  Adding Strong Jr. adds both that element and his speed, which sets up an interesting situation for James White, who is still working his way back from a devastating hip injury he suffered early last season.

At last check, White still hadn’t been cleared by doctors, although it sounded like the hope would be that he might be ready to go by the start of training camp.

Either way, the Patriots seem to have a player who may be able to grow into that role and what he brings to the table is definitely impressive.

Anyone worried about Strong playing in the elements needs to only remember that he played for South Dakota State, where the weather certainly isn’t pleasant.  So he heads into New England with plenty of experience playing in cold weather.

One contest they played last season came in a 4-degree game with 10 mph winds in a 24-21 win over rival North Dakota.  Strong carried the football 12 times for 73-yards as he and fellow back Isaiah Davis carried the load while South Dakota State put up 145 yards rushing, with Strong averaging 6 yards-per-carry in the victory.

Like New England, the Jackrabbits had success at home, compiling a 30-5 record in their last five seasons at Dana J. Dykhouse Stadium, which was completed in 2016.

Strong said after he was drafted that he felt he would be a great compliment to what he felt was an already talented group of players.

“I’ve seen Damien Harris run the ball and I like the downhill running about the guys,” said Strong. “They’re going to run the ball, you might know it’s coming but you can’t stop it, so, I’m just ready to get to work with them guys I feel like I compliment them very well.”

4) More details came out about Tom Brady’s new deal with Fox Sports and it’s safe to say, he’s going to be just fine financially when his playing days come to an end.

Without even taking his business ventures into account, it appears the network clearly believes adding the future Hall of Famer to their broadcast booth as the lead analyst is going to be just what they need to endure the loss of Troy Aikman, who departed for ESPN this offseason.

According to reports, Brady is set to be paid $375 million over 10-years, which is an unbelievable sum of money that from an annual standpoint, even eclipses his current player salary.

However, the fact the details slipped out before Brady has had a chance to hang up his cleats apparently didn’t sit well with the network.  Fox corporate spokesman, Brian Nick, spoke out about those details, which he claimed weren’t accurate.

“What has been reported isn’t an accurate description of the deal and we have not released details beyond what was disclosed on our quarterly earnings call,” said Nick via the NY Post.

Nick didn’t go on to talk about what wasn’t inaccurate, nor did he deny the total reported.

Either way, it looks like Brady got quite the sum to be able to evaluate what he’s seeing while sharing it with the world. That was a skill many enjoyed when Tony Romo took over that role at CBS. It’s going to be interesting to see if Brady can provide the same or hopefully even better insight when the time eventually comes.

5) Many will likely remember the story earlier last season where Urban Meyer did some pretty ridiculous things during his tenure as head coach, including his treatment of former Jaguars Kicker, Josh Lambo, who had probably one of the more notable run-ins with Meyer.

According to reports, while struggling during the preseason, Meyer allegedly came over to him while Lambo was stretching and kicked his leg, saying, “Hey Dips–t, make your f–king kicks.”

Lambo took issue with it, reporting it to the team and he eventually spoke publicly about it after word got out about it.

“It certainly wasn’t as hard as he could’ve done it, but it certainly wasn’t a love tap,” Lambo said at the time. “Truthfully, I’d register it as a five (out of 10). Which in the workplace, I don’t care if it’s football or not, the boss can’t strike an employee. And for a second, I couldn’t believe it actually happened. Pardon my vulgarity, I said, ‘Don’t you ever f—king kick me again!’ And his response was, ‘I’m the head ball coach, I’ll kick you whenever the f—k I want.’”

Lambo’s struggles continued into the season, which ultimately saw the team part ways with him.

The now-former kicker is now reportedly suing the club over it while seeking payment of his $3.5 million salary, along with compensation for the emotional distress.

The lawsuit, which according to the Tampa Bay Times was filed in the 4th Judicial Circuit Court in Duval County on Tuesday, claims Meyer and the Jaguars created a hostile work environment.

The original report on Lambo came out in mid December, and Meyer was fired shortly after.

By: Ian Logue
Being fast is a terrific asset to have but for rookie RB Pierre Strong Jr., being able to do everything in the New England Patriots'…
1 hour ago

By: Robert Alvarez
The New England Patriots pay tribute to team Hall of Famer and broadcaster Gino Cappelletti following news of his passing.
3 days ago
wpDiscuz