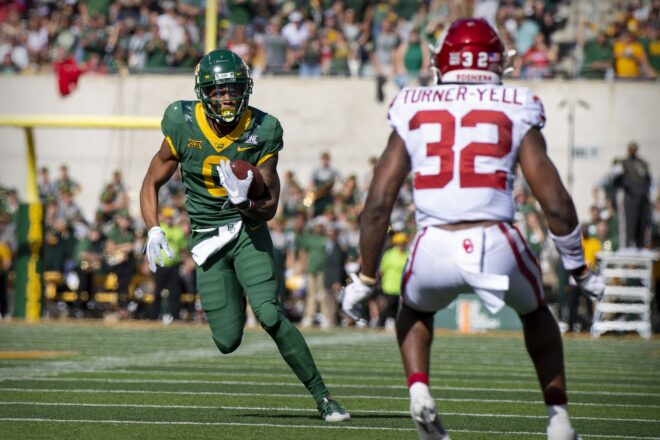 1) People had a difficult enough time with processing Cole Strange’s selection in round one last week and there were also a fair amount of others who questioned the timing of their next pick, Tyquan Thornton, in Round 2.

Thornton’s pick saw the Patriots even trade up from the #54 slot to #50 to land the speedy Baylor receiver, which left many wondering why while even arguing that he would have been there for them regardless and questioned the decision to give up the assets to move up to grab him.

It sounds like there might have been a good reason.  According to ESPN’s Jeremy Fowler, the Packers, Saints and others had Thornton on their radar in Round 2 and there have been other reports that Pittsburgh, who picked at #52, was also potentially set to take him.  They instead went with Georgia receiver George Pickens after the Patriots took Thornton off the board two picks earlier.

That’s somewhat significant because anyone who has followed the success the Steelers have had drafting that position over the years knows they’ve done a solid job evaluating quality receivers.

Going back to 2002, here’s the list of guys they’ve selected who have gone on to be productive players:

That’s a pretty good list.  Granted, they’ve had their share of misses along the way, but the percentage of guys they’ve hit on has been tremendous.  Watching New England swing and miss as many times as they have, achieving this type of success over the last 20-years may have seen an even more impressive run if they could have gotten that position figured out.

As a result, anyone wondering about whether or not Thornton’s pick was a good one should feel a little better.  If the Steelers did indeed want him, the fact they were able to jump ahead and get him could end up being one of the better moves by Bill Belichick and the Patriots this offseason.

2) One of the things that people have also questioned is whether or not Thornton has the ability to get off press coverage if he’s challenged at the line, but what’s incredible about Thornton is how explosive he is.

This bit of video was impressive.  If you watch him, his first step and how explosive he is definitely catches your attention.  He takes a step, makes a slight fake, and then his acceleration is just ridiculous.

Tyquan Thornton again. Using that twitch and stutter to create space and then plucks the ball with his hands. pic.twitter.com/OZLJo4ETH4

So what should be interesting to watch is how defenders deal with him at the NFL level.  If they play up, they run a big risk in letting him get behind them, which obviously sets up a big play.  If they play off, he’s actually a little shiftier than people seem to give him credit for, especially when he catches the ball in stride in space.

Even still, with that type of speed, he’s a player opposing defenses have to respect and that likely opens things up for guys like Kendrick Bourne and Jakobi Meyers, or tight ends Hunter Henry and Jonnu Smith, who may each suddenly end up with a little more room to work with.  Add in DeVante Parker, and it all becomes fairly interesting.

That obviously also still requires N’Keal Harry being removed from the equation, which will hopefully happen at some point.

3) Doing a little digging, it sounds like Thornton grew a lot as a player over the course of his career with Baylor.

In an article from the Waco Tribune-Herald last November, his head coach, Dave Aranda, talked about how much he matured and how his work habits grew during his time with the team, which he said also included some tough lessons but it made him a more mature player.

“I think he’s matured,” said Aranda. “Ty has been, from the very beginning, blessed with great length and speed and athleticism. I think where Ty has really grown is his practice habits, his mindset, his attitude towards work. I think those things have really taken off, and I think there were some probably hard lessons in all that.”

Aranda talked about what the COVID year did to players, which made it tough for coaches to really push them out of fear they might lose them.  That approach changed the following year, and Thornton was among the players who he saw a lot of growth from.

“I think one of the things with the COVID year is that it’s difficult to push people when you’re afraid of losing people,” Aranda said. “So whether it was my still learning our team, or it was their ability to kind of get out and go, if all of this is not a good situation, I think there were times where some bad habits were sustained. And I think for Ty, his ability to recognize that and attack those things, has really led to just a strong growth. I’m really proud of him.”

As for Thornton, he admitted at the time that he put in a lot of work coming into last season, which saw him get stronger in the weight room led by former NFL receiver, Chansi Stuckey, who was Baylor’s wide receivers coach.  Thornton said those efforts absolutely helped make him a stronger player.

“I just came in the offseason and put in that work and tried to get better at some of the things I needed to work on, which is getting my body stronger, learning the game inside-out, and having coach Stuckey come in and listening to what he’s got to say,” Thornton said “He’s going to help me grow as a receiver. Applying the stuff I did in the weight room is going to help me a long way too.”

Hopefully, that growth will also continue now that he’s here in New England. 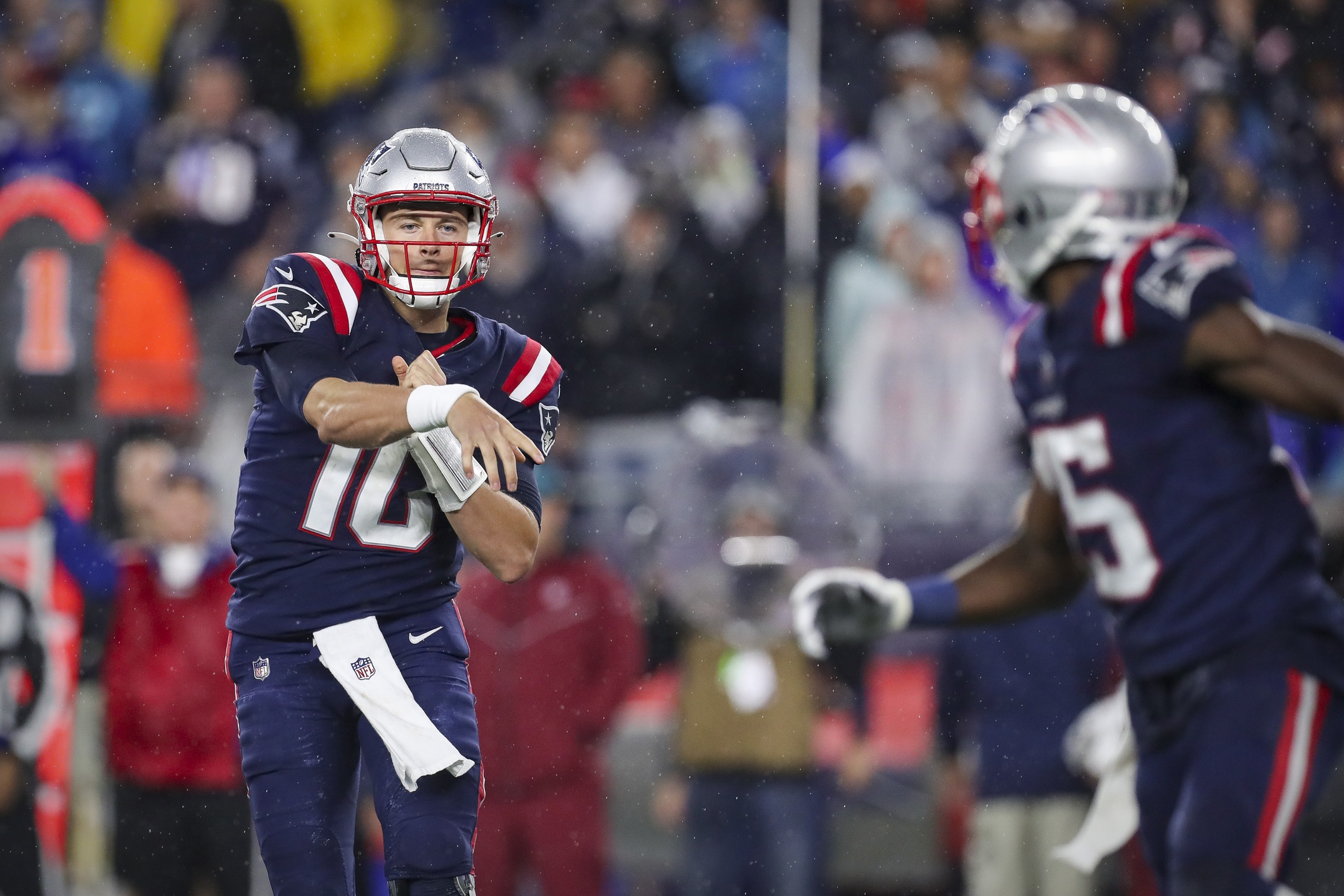 4) The other big question is going to be what happens with Nelson Agholor, which will likely determine exactly how many snaps Thornton may see this season.

The rookie’s addition changes things with the wide receiver depth chart, which is pretty crowded and it leaves the Patriots with a bit of a challenge when it comes to figuring out how they plan on dealing with it.

According to Spotrac, Agholor is on the books for a base salary of $9 million this season, with a cap hit of nearly $15 million in what is the final year of the two-year contract he signed last offseason. The financial part of his contract has already been discussed quite a bit, but New England’s offseason additions now make his situation even more difficult.

What’s a little crazy about that stat is really more that those three picks came in three straight games, with Jones getting picked off targeting him against the Saints (9/26), Tampa Bay (10/3) and Houston (10/10).   Jones actually targeted Agholor 26 times with 15 completions (58% comp rate) for 167-yards and a TD over the first five games over that span, with the two struggling to get on the same page before hitting that turnover stretch.  Agholor was tied with Henry (20/26 for 216yds and 2TDs) with the 2nd most targets, with Meyers leading that category with 46 (31/46 for 302yds).

However, what’s interesting is that his targets dropped dramatically over the final 12 games.  He was targeted just 36 times with 20 completions for 251 yards and a TD, with his 36 target total coming in the 4th lowest behind Meyers (79), Henry (49), and Bourne (44).  In fact, Brandon Bolden was only one behind him with 35.

Looking back at the film, it’s been pointed out that the duo left a lot of plays on the field.  Either way, the fact there was such a dramatic shift after that point is interesting.  But whether or not he’ll get more opportunities this season is definitely going to be something to watch, especially depending on how Thornton ends up factoring into the offense.

5) With the full NFL schedule set to be released this week, we do know who will be playing on Monday night in week two.

That evening will include a Monday night doubleheader that will feature the Titans and Bills in Tennessee in the early match-up beginning at 7:15pm ET, followed by Minnesota at Philadelphia beginning at 8:30pm ET.

The fact the league is overlapping the two is a little strange, making it where fans will have to decide which contest to watch as the second game kicks off just 75 minutes later.  At the same time, it makes it a little easier on those who don’t necessarily have the energy to stay up for a kickoff start time after 10pm ET, which the league had done previously while featuring a west coast team home game.

The full schedule is expected to be announced on Thursday, but given what we’ve seen in the past, it wouldn’t be a surprise if we hear something prior to that point.  Either way, we’ll have a better feel for how 2022 will be playing out for the Patriots in the coming days, which should be fun to keep an eye on.

In the meantime, don’t forget to sign up for our daily email list below. Also, we’d also like to say a quick thank you to Feedspot for recently naming us one of the Top 35 New England Patriots Blogs and including us in their list. We appreciate it.