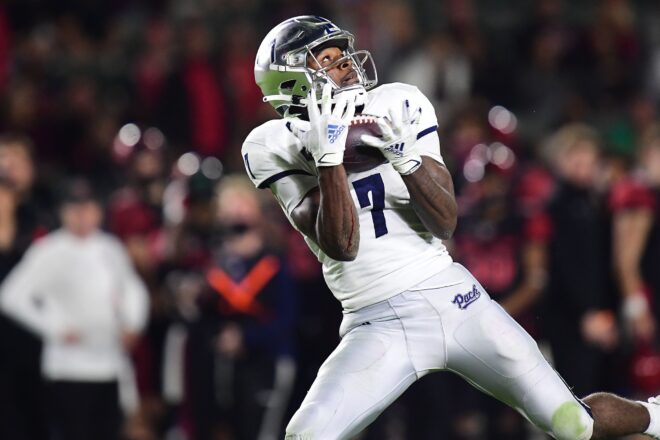 The Patriots are continuing to do their due diligence leading up the draft, with the club apparently taking a look at a receiver heading into Thursday night.

According to The Draft Network’s Justin Melo, New England met with Nevada wide receiver Romeo Doubs for the 3rd time recently, with the Patriots having also previously met with him at both the Sr. Bowl and the NFL Combine.

The standout for the Wolf Pack was unable to participate at the Combine or his school’s Pro Day due to a knee injury that he’s still recovering from, so it’s possible the club was trying to see where he was at medically as they continue pondering who they’ll target tomorrow.

Doubs had a productive career, which included back-to-back 1,000-yard seasons.  What’s incredible is that there’s some context missing, as Doubs caught 58 passes for 1,002 yards and nine touchdowns in just nine games in 2020.  That total is staggering and included one performance where he went for over 200 (219-yards) against UNLV that season.  He finished with five games with 100+ yards and nearly had a 6th (97yds).

He’s also a potential contributor on special teams, with Doubs also earning accolades as a punt-returner after finishing his collegiate career with 37 returns for 463yds (12.5 avg), including 12 returns for 170-yards in 2021 (14.2 avg).

Doubs told NSN back in March that he’s getting himself mentally prepared for life at the NFL level and he knows he’ll have his work cut out for him.

“Mentally, I’m just preparing myself so I know what I’m getting myself into,” said Doubs. “I’m going to go against guys at the next level that are way more experienced that I am. I’m literally going against the best of the best. So it’s just a confidence, a mindset that I should have on my own just being able to tell myself throughout the times that I work the hardest, that I’m the best on the field. So I think that’s just where I am mentally, not just going in there just to have this cocky mindset that I’m just going to go out there and take whoever’s spot because I know this is the highest level that there is.”

Doubs is expected to be a late-round selection, with various publications having him rated at somewhere between rounds 3-5.  He’s certainly an intriguing prospect, and definitely a name to keep an eye on this weekend.

(EDITOR’S NOTE: Portions of the Above appeared in this morning’s Patriots news and notes column.)

How Was This Article?
Posted Under: 2022 Patriots Draft
Tags: Romeo Doubs University of Nevada