3 weeks ago at 10:11 am ET
Follow @IanLogue
Posted Under: Patriots News 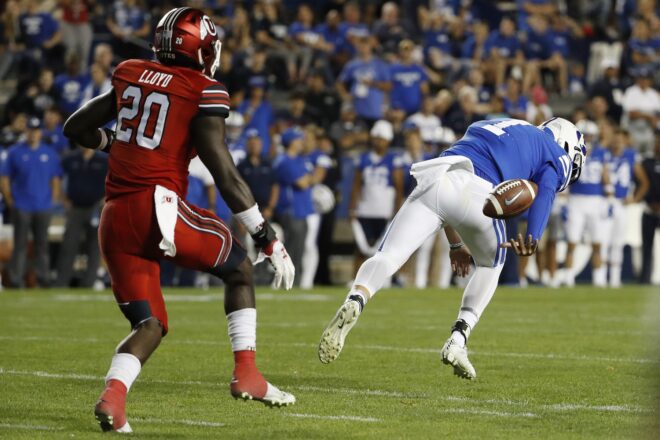 Some news and notes on this Wednesday morning:

1) The mock drafts continue and Greg Bedard of Boston Sports Journal posted his overnight, with Utah’s Devin Lloyd coming up as his choice for the New England Patriots with the 21st overall selection.

Bedard equates him to former San Francisco 49er Fred Warner, as well as former Colts LB Darius Leonard, noting that while Lloyd’s 40 number wasn’t great (4.66), it was actually similar to what both Jamie Collins and Dont’a Hightower each put up coming out of college.

Lloyd has been the consensus among the majority of analysts heading into this draft and was among the players the club met with back on March 4th at the NFL Scouting Combine.  Other linebackers they met with were said to be Alabama’s Christian Harris, Georgia’s Quay Walker and Wyoming’s Chad Muma, with the focus obviously being to try and add some youth and athleticism to a position that had a difficult time down the stretch last season.

What’s interesting is that Lloyd nearly became a potential later-round selection after he initially was pondering leaving school last year, which had seen Utah’s season cut short in 2020 thanks to the COVID-19 pandemic.  Lloyd had played in just the 5 games the Utes were able to play that year, and had a conversation with a teammate about his thought process that ultimately changed his mind.

“I can remember vividly what Cody said,” Lloyd said of fellow linebacker, Cody Barton, during a March spring practice via the Salt Lake Tribune. “The way he put it was, ‘Would you rather have somebody give you $1 million right now or $5 million a year from now?’”

As a result, it seems like his decision is about to pay off.  His former coach, Kyle Whittingham, talked about what makes Lloyd so great back in October, which listening to him certainly reinforces the idea of him fitting what Patriots head coach Bill Belichick tends to look for.

“What makes him a good football player is just a myriad of things,” said Whittingham. “He’s got great size, nearly 6-3, pushing 240 pounds, he runs like a deer, he’s instinctive, he’s got a long wingspan. You see him tip balls quite often, he’s gotten his hands on two or three balls this year.

“He’s a playmaker. He’s a guy that when there’s a play to be made, he almost always makes it. He is an absolute football junkie and student of the game. He watches as much film over the course of the week as anyone we’ve had here.”

We’ll find out tomorrow whether or not he’ll be watching film here in New England in 2022.

They have the Patriots trading back out of the 21st overall spot, making a deal with Arizona for the #23 overall pick and #215, along with a 2023 third-rounder to allow the Cardinals to select Arkansas WR, Treylon Burks.

From there, Lloyd went next at #22 overall to the Packers, so New England traded back again from #23 after sending that pick and the previously acquired #215 pick to the Buccaneers in exchange for pick #27 and a 2023-third rounder.  Tampa would then select Boston College guard Zion Johnson.

Booth’s name has been another popular potential candidate in quite a few mock drafts, and with Lloyd having been snatched up by Green Bay, he was their next best option given their needs in the secondary.

The former Clemson standout had a strong finish to his regular-season career, which saw him not allow a reception during a 30-0 blowout win on the road at South Carolina.

Booth Jr. reportedly underwent sports hernia surgery earlier this year and sat out the Combine due to a quad injury, with both of those issues appearing to be what has his stock dropping.  However, he was a reliable player for Clemson and he’s tough.  SI’s Mike Santagata took a look at some film and noted that Booth Jr. loves being physical and does exactly what he needs to not only in coverage, but also when making tackles.

Andrew Booth fights through screens as if his life depends on it. Not only does he beat the block, but he also makes the tackle. pic.twitter.com/0Jgp7si3V5

He’s also tough against the run:

Andrew Booth also plays with his hair on fire in the run game. He plays the run aggressively and likes to attack the ball carrier before they can get downfield. pic.twitter.com/Jv5eOhXxnn

Whether or not he ends up here remains to be seen, but he appears to at least have the tools to be a good addition to a secondary that certainly could use some young, talented depth.

3) Former Patriots defensive lineman Vince Wilfork has seen his son have some legal issues, which included last year’s arrest for the theft of his father’s championship rings.

According to reports, D’Aundre Holmes-Wilfork recently pleaded guilty to stealing not just the rings but other “prized possessions” from his dad, but it sounds like he won’t be facing any jail time.

TMZ reports that Holmes-Wilfork received five years of deferred community supervision as part of the agreement, which will allow him to avoid prison provided he stays out of trouble over that span and meets the probation conditions.  He was also ordered to pay court fees and to participate in a drug-screening program.

The items stolen, which included Wilfork’s Super Bowl rings, his AFC Championship rings, along with his 2001 Miami Hurricanes national championship ring, were all said to be worth a reported $400,000 and were sold without his father’s knowledge.

One side note to the story is going to be the fact that court records show that the conditions of the deal included having the items returned.  No additional details were provided about whether or not that happened, but it should be interesting to follow in the event Holmes-Wilfork isn’t able to recover them from the people he sold them to.

According to the Galveston times, the troubled son of Wilfork has received forgiveness from his parents, with his attorney, Mark Aronowitz, saying that he hopes he can rehabilitate himself and move on from what’s likely been a difficult time for both sides.

“The outcome that emerged from the case was a result of much self-reflection and healing on the defendant’s part and the willingness of his parents to forgive him and show him unconditional love with the sincere hope that he can be rehabilitated and go on to live a happy and productive life,” said Aronowitz.

4) The Patriots are continuing to do their due diligence leading up the draft, with the club apparently taking a look at a receiver heading into Thursday night.

According to The Draft Network’s Justin Melo, New England met with Nevada wide receiver Romeo Doubs for the 3rd time recently, with the Patriots having also previously met with him at both the Sr. Bowl and the NFL Combine.

The standout for the Wolf Pack was unable to participate at the Combine or his school’s Pro Day due to a knee injury that he’s still recovering from, so it’s possible the club was trying to see where he was at medically as they continue pondering who they’ll target tomorrow.

Doubs had a productive career, which included back-to-back 1,000-yard seasons.  What’s incredible is that there’s some context missing, as Doubs caught 58 passes for 1,002 yards and nine touchdowns in just nine games in 2020.  That means he averaged over 100-yards per contest, which is staggering and included one performance where he went for over 200 (219-yards) against UNLV that season.  He had another solid year in 2021, having caught 80 passes for 1109-yards with 11 touchdowns in 11 games.

He’s also a potential contributor on special teams, with Doubs also earning accolades as a punt-returner.

Doubs told NSN back in March that he’s getting himself mentally prepared for life at the NFL level and he knows he’ll have his work cut out for him.

“Mentally, I’m just preparing myself so I know what I’m getting myself into,” said Doubs. “I’m going to go against guys at the next level that are way more experienced that I am. I’m literally going against the best of the best. So it’s just a confidence, a mindset that I should have on my own just being able to tell myself throughout the times that I work the hardest, that I’m the best on the field. So I think that’s just where I am mentally, not just going in there just to have this cocky mindset that I’m just going to go out there and take whoever’s spot because I know this is the highest level that there is.”

Doubs is expected to be a late-round selection, with various publications having him rated at somewhere between rounds 3-5.  He’s certainly an intriguing prospect, and definitely a name to keep an eye on this weekend.

5) Michael Bruton of Bleacher Report made an interesting suggestion in his column yesterday where he looked at potential trades for each team heading into the draft, with Bruton doing something we haven’t heard too many suggest

He believes that the Patriots and Jaguars should strike a deal to send Isaiah Wynn to Jacksonville in exchange for this year’s 4th-round pick, allowing New England to turn the page on a player who has been a little inconsistent and may not be their left tackle of the future.

The only issue there is the fact the Patriots seemingly aren’t deep enough to lose him.  While Wynn hasn’t been perfect, he’s been serviceable enough – when healthy – to make himself enough of an asset where he’d be difficult to part with without a replacement.

Bruton notes that it makes sense to move Wynn now if they’re not planning on extending beyond this year, since Wynn is in the final year of his contract.

“The Patriots have nine selections but only four in the first four rounds,” writes Bruton.  “Belichick could look to add a fourth- or fifth-round pick by moving left tackle Isaiah Wynn before he departs via unrestricted free agency next year.”

“We identified Jacksonville and its fourth-rounder, No. 106, as a return for Wynn. The 2018 No. 23 pick may be better suited at left guard or right tackle, while the Patriots could draft a left tackle of the future at No. 21. If, of course, Belichick does not trade down.”

It’s possible the club could indeed go that route, but that will likely depend on how things unfold and with a young quarterback, having strong depth along an offensive line that already suffered some hits this offseason would certainly need to be a priority.

We’ll see how things go, but it’s possible that they could make a move that could surprise us.  Whether or not that includes a deal like this one remains to be seen.

By: Ian Logue
Seeing Vince Wilfork emerge as this year's New England Patriots Hall of Fame inductee is a fitting end to quite a story for the former…
5 hours ago