10 months ago at 6:30 am ET
Follow @SteveB7SFG
Posted Under: Patriots Commentary

The Patriots’ wide receiver position along with the tight ends was easily the worst collection of skill position players in the league. For all of the hand-wringing about the play of Cam Newton at QB a year ago, There was nothing he could do, especially after Julian Edelman was hurt after Week 2, and never recovered.

Changes, big changes were needed. The team spent some good money on a couple of receivers that many people wouldn’t have picked at the start of free agency. But one thing to remember is this. The Patriots didn’t “settle” for Nelson Agholor and Kendrick Bourne after the dust had settled in free agency. They targeted both of them at the outset of free agency and paid good money to each.

They also upgraded in a very big way at tight end (our next primer), so we’ll get to that later. But they didn’t draft a wide receiver until the 7th round when they selected Tre Nixon, which happened to be the last official act of Ernie Adams in the Patriots draft selections before his retirement.

The question that remains now is…did they do enough? Time will tell.

So, let’s take a brief snapshot of the position and see who stays, who goes, and who is on the bubble as the team begins training camp in 2021. 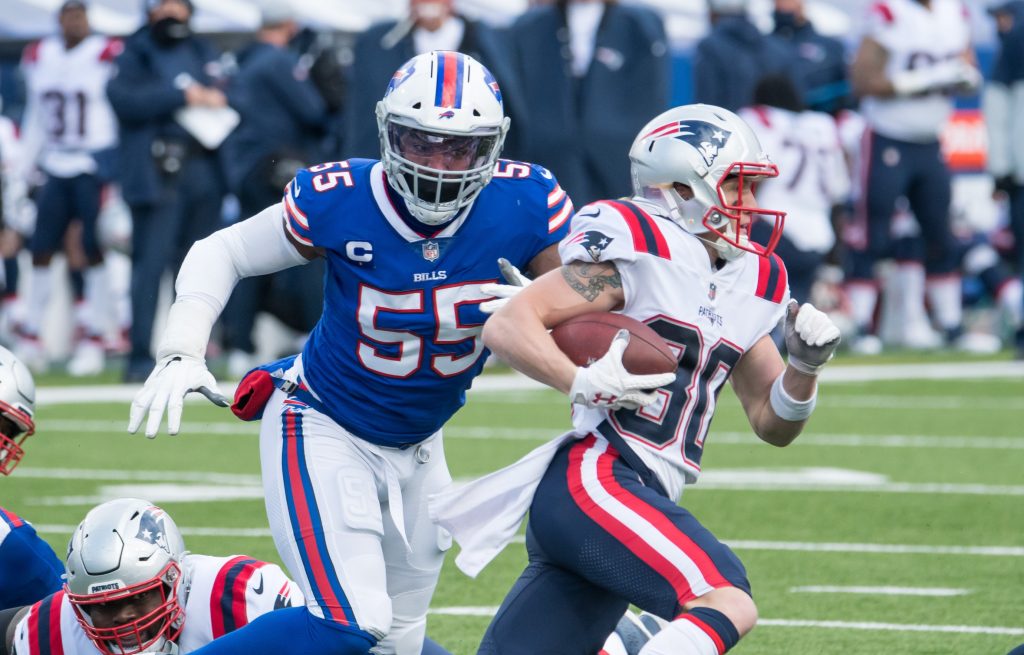 Gunner Olszewski was an All-Pro Punt returner and will be looking to get a more active role in the offense. (Mark Konezny-USA TODAY Sports)

Discussion – When it comes to the wide receivers, while they’ve improved greatly on paper, we haven’t seen them on the field yet and it may take some time for the QBs and WRs to find their chemistry and comfort level, but there is no way they could be worse of a group in 2021 unless they are hit with a slew of injuries.

Nelson Agholor brings some much-needed explosiveness to a team that was sorely lacking it for the past couple of years. After a few years with the Eagles, where he left them waiting for more, everything seemed to come together for him with the Las Vegas Raiders in 2020. The Patriots are hoping that the arrow is still pointing up and he’ll continue to improve.

Agholor’s ability to stretch the field made him a favorite weapon of Derek Carr and his 48 catches went for 896 yards for a stellar 18.7-yard average with 8 touchdowns. Either Cam Newton or Mac Jones will probably target him in much the same way. With the two tight ends being the focal point of the offense, there should be plenty of opportunities to stretch the field.

Versatility…thy name is Belichick. Agholor can move around he played in the slot for nearly 400 snaps and outside for 316 more. That will play into Josh McDaniels’ hands as he’ll be able to move guys around and create favorable matchups. The speed he brings to the table should be utilized as much as possible.

Jakobi Meyers was easily the most dependable wide receiver on the Patriots last year and followed up his 2nd season with 59 catches for 729 yards by spending time with Cam Newton this offseason and working out together…That was good news to hear.

But Meyers has that underdog chip on his shoulder to keep improving his game. He was a QB turned WR in college and excels out of the slot. He’s far from a burner, but runs great precise routes, uses his body well, and has great hands. He works extremely well in the short areas and moves the chains.

Kendrick Bourne was targeted by the Patriots soon after free agency began. That should tell you how they feel he fits in the Patriots’ offensive scheme. Bourne has good size at 6’1, 203, and has been in the league for four years, and has improved every season. Last year he had a career-high 49 catches for 667 yards and 2 touchdowns.

His playing time and snaps were cut because of the depth the Niners had on their offense but Bourne is a very good chain-moving target that like Meyers and Agholor can play outside or in the slot. The top three targets in the wide receiver room can play inside or out. That is a good sign for some nice creative work by McDaniels. 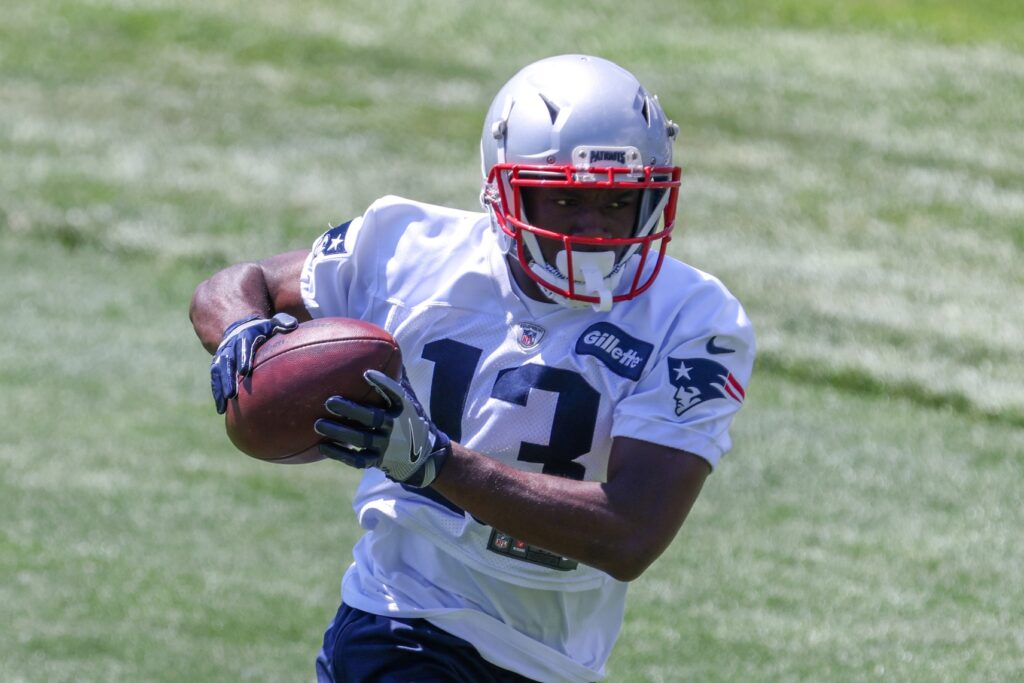 Nelson Agholor will be the field stretcher for the Patriots offense. (Paul Rutherford-USA TODAY Sports)

Gunner Olszewski turned in an All-Pro season as a punt returner. That alone makes him a lock for the roster in 2021. When watching Olszewski catch fire in the second half of the season in the return game, many were reminded of another small school kid who made his bones in the return game and then turned into an outstanding receiver on the team, Julian Edelman.

Year three could be a charm for Olszewski as he will try to develop into a reliable slot receiver. He had a very good spring and it wouldn’t be a stretch to believe that Gunner will work his way onto the field more out of the …slot, where else?

N’Keal Harry set the Twitterati on fire when his agent requested a trade for the soon-to-be 3rd year wide receiver. Although he was a first-round draft choice (32nd overall, Harry has yet to live up to that billing. Part of the issue has been health, it seems every time he looks like he’s catching on and has a good day on the practice field, he gets hobbled and misses time. But part of that has to do with the way he’s used and the Patriots, famous for putting players in a position to succeed by playing to their strengths, haven’t done that with Harry.

He’s a big, contested-catch kind of guy, and I expect that in the preseason, they are going to lean on him big time to showcase his ability to do just that, and then give him his way and trade him off before the regular season.

Tre Nixon got injured in his final college season and his production plummeted. However, he was selected by Ernie Adams so that is intriguing in itself. He was mainly an outside wide receiver at UCF with good straight-line speed, but he posted an outstanding 6.81 time in the all-important (to NE at least) 3-Cone Drill, which shows that he has the quickness and lateral speed to play out of the slot as well.

Isaiah Zuber, Kristian Wilkerson, Marvin Hall, Devin Ross, and Devin Smith all have their upsides which will make the competition at the back end of the receiver roster very interesting to watch this summer.

Zuber got on the field for a few snaps last year and performed well. Wilkerson, while an exceptional athlete, has precious little experience, which consisted of two snaps against the Jets last year. Hall has blazing (4.28 in the 40) speed but not much to show for it in his stops with Atlanta, Detroit, and Cleveland and has only 37 career catches. Devin Smith is a deep threat with his speed but hasn’t shown he can work the underside of the field, while Ross has had stints with the team before and has the experience within the system so that he already has knowledge of the responsibilities. It would seem that these players as well as Nixon are competing for one roster slot with probably two others going to the practice squad.

While there are still questions surrounding this wide receiver group since many of them haven’t played for the Patriots before, they look to be in much better shape when the 2021 season starts.