Tragedy struck the NFL Community over the weekend when Pittsburgh Steelers quarterback Dwayne Haskins was hit by a car while he was walking on a South Florida highway early Saturday morning. He was pronounced dead at the scene by emergency responders.

According to an ESPN report, Florida Highway Patrol spokesperson Lt. Indiana Miranda said Haskins “was attempting to cross the westbound lanes of Interstate 595 when there was oncoming traffic.”

It remains unknown at this time why Haskins was trying to cross the busy road but his death remains “an open traffic homicide investigation.”

Haskins was in Florida participating in offseason workouts with other Steelers players, he was just 24-years old at the time of his passing.

Both NFL teams Haskins played in his career shared the following statements from their head coaches along with some heartfelt messages from his teammates over social media.

We are deeply saddened by the tragic loss of Dwayne Haskins.

May he rest in peace. pic.twitter.com/PsDEx9RI5J

Dwayne meant so much to so many people. His smile was infectious and he was a guy you wanted to be around. We are all in shock about losing him. We are going to miss the heck out of him as well. We lost you way too early. Luckily I got a chance to get to know you. RIP DH

The world lost a great person today. When Dwayne first walked into the locker room I could tell he was an upbeat guy. He was always making people smile, never taking life for granted. His impact on me will last a forever.

I spent your final moments with you and I can’t help but think about how selfless you were in those moments. All you cared about was making sure that everyone around you was okay and I can’t thank you enough for that. You are what I strive to be. #LL3

A message from Ben. pic.twitter.com/P3aMe8Njbs

A few current and former Patriots also shared their thoughts and condolences throughout Saturday. 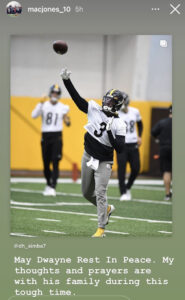 My Lord… prayers for Dwayne’s family 🙏🏽

A reminder to smile at the bullshit we deal with on the daily.

God Is and will forever be the Greatest! May God be with the Haskins family and loved ones.

Praying for the Haskins family!

He was so young, with his whole life ahead of him… Rest easy, Dwayne. My thoughts and prayers are with the entire Haskins family 🙏🏾 pic.twitter.com/mauQjUQZ7Z

Many players around the league also expressed their sadness to the shocking news.

Praying for your loved ones. Make sure you tell your loved ones how much you love them. Gone too soon. 🙏🏾🙏🏾🙏🏾#RIPDwayneHaskins pic.twitter.com/Tqh0klTlIl

Tough to find the words… you will be missed pic.twitter.com/x9bNzmRvCv