This past weekend the NFL Community was in mourning when Pittsburgh Steelers quarterback Dwayne Haskins passed away after being hit by a vehicle on a South Florida highway.

According to law enforcement, an investigation into why the accident occurred remains ongoing. At the time, Haskins was in the area taking part in informal offseason workouts with a few members of the Steelers offense.

During the initial period when the story broke, ESPN’s Adam Schefter sent out a tweet that was immediately criticized as insensitive by his followers, media members, and players around the league.

The original tweet, as viewed below, generated outrage due to the mention of Haskins struggling in the NFL early in his career. 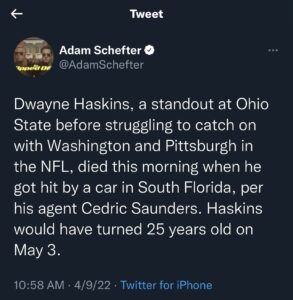 The tweet would be deleted and replaced with one that focused on the positive parts of Haskins’ life.

Dwayne Haskins, a standout at Ohio State before becoming Washington’s first-round pick and playing in Pittsburgh, died this morning when he got hit by a car in South Florida, per his agent Cedric Saunders. Haskins would have turned 25 years old on May 3.

Despite the change, many in the NFL remained disappointed with Schefter’s handling of the story, including New England Patriots wide receiver Jakobi Meyers, who went ahead and called him “a real weirdo” for the way he worded the first tweet.

As of this writing, neither Schefter nor ESPN have commented on the original tweet.