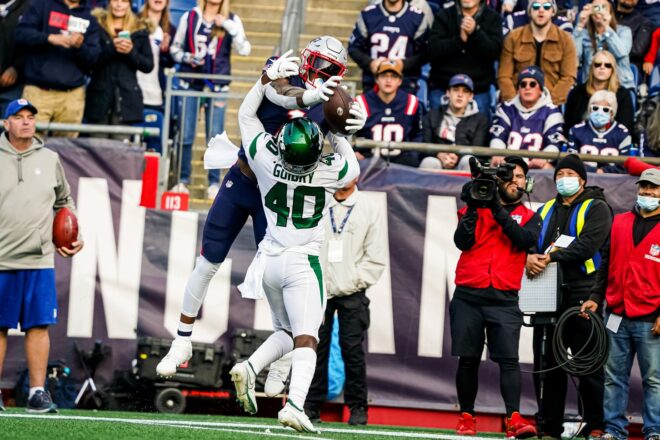 (Editor’s Note: Portions of the below article appeared in this morning’s news/notes column)

With the addition of DeVante Parker, Patriots receiver N’Keal Harry’s future is definitely in the spotlight.

Considering that one of Parker’s biggest strengths happens to be one of the key reasons they drafted Harry a few years ago, most signs point to the end of the line for the former first-round draft pick.  However, if that’s the case, no one has apparently said anything to Harry just yet.

According to ESPN’s Jeremy Fowler, Harry hasn’t heard about anything from the team as it pertains to his future.  However, that could obviously change as we get closer to the NFL Draft, which could be a time where teams may inquire about the former Arizona State standout.

It’s been a disappointing run for Harry, who has a total of 57 catches for 598-yards and 4 touchdowns over his three-year career.  Last season was certainly his most disappointing as injuries and performance limited him to 12 games where he caught just 12 passes for 184-yards, spending the majority of time in on rushing downs where he at least excelled as a blocker.

Unfortunately, first-round receivers are generally relied on to make plays and be productive, which was something Harry’s agent tried to remind everyone that he did in college last offseason.  Instead, all we saw was more of the same from Harry last season, including some frustrating moments that showed just how far he’s fallen.

Harry was reportedly not among the group spotted down in Tampa working out with quarterback Mac Jones, which barring a change there, is certainly noteworthy.

While nothing may have been said to Harry just yet, it would be a surprise to see him survive training camp.  That’s under the assumption that the team stands pat with their group right now which includes Nelson Agholor, Parker, Kendrick Bourne, and Jakobi Meyers.  Should a move possibly happen with Agholor, which has been speculated by many due to financial reasons, that would potentially be a sign that Harry could be back in the mix for another season.

After three frustrating years, one could only hope that isn’t the case.

By: Steve Balestrieri
“A lot of guys were getting worried because when we were in the middle of camp, we were wondering what the plan was for our…
17 hours ago