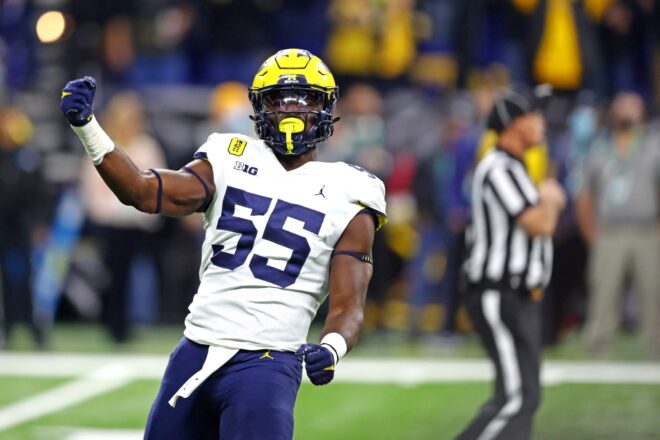 We covered some linebackers (Devin Lloyd, Chad Muma) in our earlier draft profiles but our next one deals with an edge player, with a high ceiling who may see his stock fall during the NFL Draft due to an injury he suffered during his Pro Day workout.

The Patriots need help on the edge, especially getting after the opposing QB. Matthew Judon got off to a tremendous start but wore down as the season progressed and by playing him too much watched his production dwindle. Josh Uche had a tremendous camp and seemed poised for a breakout season. He then virtually disappeared in 2021.

Ronnie Perkins was drafted last year, but had a red-shirt type of year and didn’t see the field at all. Chase Winovich had a decent start to his career but ended up in Bill Belichick’s doghouse and saw the field little and was traded to Cleveland for LB Mack Wilson.

The team will probably look to add a veteran in free agency, one particular former Patriot Trey Flowers has been a name that has been tossed about, and he’s still just 28-years old. But they will probably also look for a draft prospect as well.

David Ojabo, from Michigan, is an edge rusher who is just beginning to emerge and has only scratched the surface of his potential. Ojabo tore an Achilles tendon during his Pro Day at Michigan and although he will play this season, will miss significant time, at least at the start of the year. This will cause his draft stock to decrease, but he should recover and once again be the player he was in 2021.

Ojabo burst on the scene last year after playing only sparingly in 2020. But the progression he made playing opposite Aidan Hutchinson was eye-opening. He was a second-team Associated Press All-American and first-team All-Big Ten Conference player, notching 35 tackles, 12 tackles for loss, 11 sacks, and a school-record five forced fumbles, which was tied for third in the FBS. He was also voted a second-team Academic All-American.

While still raw, he possesses a very high ceiling with outstanding physical tools and athleticism. He measured out at 6’4, 250 with 33 ½ inch arms at the Combine and ran a very impressive 4.55 in the 40-yard dash.

For someone with little experience, his wide variety of pass rush moves are already very good and he has an explosive first-step burst, long and she won a state 100-meter race so his speed is excellent, and bending the arc when rushing the passer is elite, reads and nose for the ball are impressive for a player who is still learning football

– Has a variety of pass rush moves

– Speed and lateral agility are outstanding

– Still learning the game and is raw

– Inconsistent, due to inexperience

– Needs to improve as a run defender

Ojabo will probably miss much of the early season due to injury, but could use the time to learn the defense and what his responsibilities will be

Yes, he could be a bookend pass rusher by 2023 to Judon

Kyle Van Noy who was released

Good, he played exclusively on STs in 2020

NFL.com draft analyst Lance Zierlein said that Ojabo is an “Emerging edge defender who should see a substantial leap in play consistency with more time to work on his technique and learn the game. The upside is evident, despite his inexperience.

Ojabo is still learning the game and is still raw, and needs to add some extra muscle to his frame to hold up in the running game when playing in the NFL, but ESPN’s Dan Graziano summed it best when he said at the Combine, “the thought on Ojabo is that if you get him now, you could have a superstar at a critical position in two or three years.”

Prior to his injury, many pegged Ojabo to be a first-round selection in the draft. That may change now to a 2nd round pick. And he would definitely be worth a long, glance there. The results in 2022 would be limited, but he has yet to play his best football.