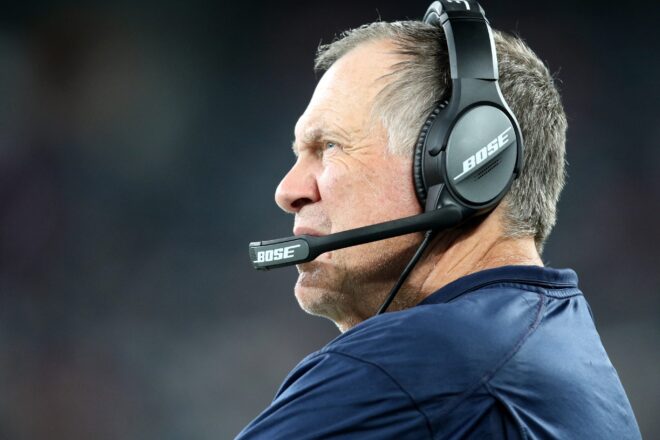 With the Patriots trailing by 13 points on Saturday night and just 9-minutes left to go in the game, Bill Belichick made the decision to have his team kick a field goal rather than going for it on 4th down against the Colts, which left some questioning the decision.

However, Belichick talked about the call on Monday, saying that given the field position on that 4th down play, the field goal was the smarter move and that he believed there was enough time left to score the remaining 10 points.

“It’s still a two-possession game and now it’s a field goal. I thought there was enough time left that we would have enough possessions to be able to score 10 points, which we conceivably could have,” explained Belichick.  “It would have been, was it 4th-and-goal on the 7? Is that what it would’ve been? I didn’t feel great about converting 4th-and-goal from the 7. Had there been less time and there’s a situation where you would go for it or I would go for it on 4th-and-goal at the 7, absolutely. I didn’t think, in that game situation, that would’ve been the best decision.”

“I thought that would’ve passed up three points and that would’ve taken two touchdowns. At the end of the game, especially in the dome, having a chance at a 50-plus yard field goal, I think it’s a lot better chance than scoring a touchdown and having a six-point differential as opposed to a three-point differential, relative to the chances of converting a 4th-and-7.”

“At some point, I definitely would have kept the offense on the field on 4th-and-7 with less time or no timeouts. You can, certainly, take that scenario further, so then you get into the grey area of which one would you do if there’s less time, fewer timeouts, whatever.”

The strategy nearly worked, as the Patriots went on to score a touchdown on the ensuing drive, pulling back within 3 points at 20-17 with just over 2-minutes left to play.

Unfortunately, with Kyle Dugger and Ja’Whaun Bentley leaving the game due to an ejection and injury respectively, New England was undermanned on defense and wasn’t able to corral Jonathan Taylor, who took off for a 67-yard touchdown on a 2nd-and-8, which ruined any chance of a potential game-tying field goal.

Had New England held Taylor and forced a punt, it’s possible the offense could have had enough time to get into field goal range, which given the fact the game was indoors, could have seen Nick Folk have an opportunity to force overtime with a long field goal.

Instead, despite a strong effort late, they came up just short which Belichick admitted again on Monday, made it “a frustrating game.”