1 year ago at 7:00 am ET
Follow @ralvarez617
Posted Under: Patriots Photos 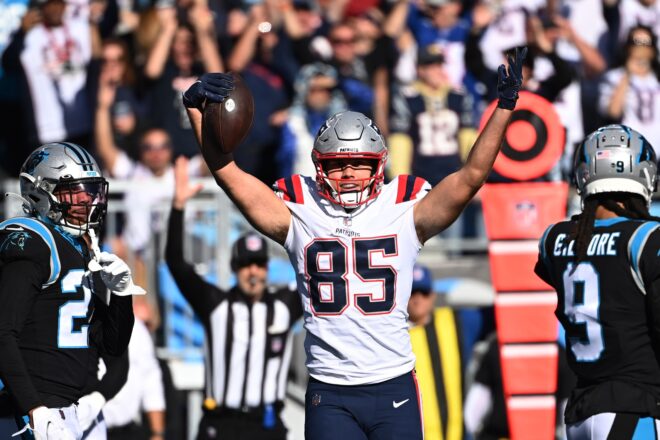 With the Patriots bye week in full swing, the coaches and players finally have downtime to spend with their families, or in the case of tight end Hunter Henry the opportunity to begin one.

On Friday, Henry revealed over Instagram that his wife Parker had given birth to their son.

“Will never forget the moment I became a dad. Welcome to the team Ace! I didn’t know I could love someone so much!”, Henry wrote in a post.

You can check out a few photos of the newborn shared by the Henry’s below.

At one point this season, knowing his wife was expecting at any time, Hunter made it clear he would miss a game to see the birth of his first child.

“That is a tough conversation. This is my first, man. If it had to be a game or seeing my firstborn be born, I’m going to go see my child be born,” Henry said. “We’re going to do our best to not have that come across.”

However, Henry’s biggest fear was if his wife went into labor during a game.

“The biggest issue is when the game starts, and if she goes into labor during the game, that is where the issue lies,” he explained. “But we’re ready and have a lot of backup plans to be ready to go.

“We have a lot of family coming up this time of the year, especially with the holidays. It’s nice,” he continued. “Having family around for her for support, especially with these next two games being on the road, we’ll have family close by to make sure she’s good.”

Well, it appears the young Henry did find the perfect time to make his world debut after all.

Congratulations to the Hunter family!

By: Robert Alvarez
Robert Kraft and Bill Belichick Release joint statements about Tom Brady after his decision to retire from the NFL for a second time.
2 hours ago