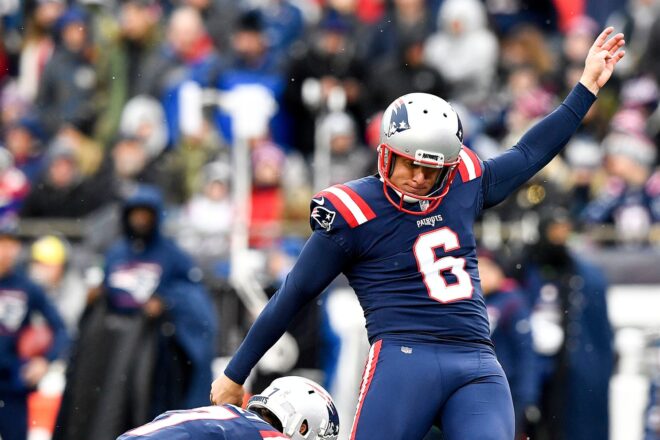 The surging Patriots won their sixth game in a row, a hard-fought 36-13 win over the beat-up but resolute Tennessee Titans. A quick glance at the final score would lead you to believe that the Patriots cruised and crushed the undermanned Titans. But that wasn’t the case.

Mike Vrabel and the Titans had a simple solid game plan and they were hanging around until mid-way through the 4th quarter by simplifying things. The Titans tried to play smash-mouth football by running the ball behind a very good offensive line, taking away the run, and hanging close into the fourth quarter. They dominated the line of scrimmage in the running game both offensively and defensively.

But the Patriots’ blueprint for success during this winning streak has been being opportunistic on defense, playing complementary football, and making big plays at big times. The Titans certainly hung tough but made too many mistakes early and then turned the ball over far too often, losing the turnover battle 4-0 and turning it over twice on downs.

They rushed for 270 yards but lost by 23 points while holding the Patriots to just 2-5 in the red zone. But the Patriots did what they had to do and in the end, won in a rout against a team that will be dangerous if it gets healthy down the stretch. At 8-4, they are back on top in the AFC East and play the Buffalo Bills next Monday night.

Other observations from the win include:

Kendrick Bourne Was a Bargain: Remember this spring when the naysayers were saying that “Bill overpaid for the receivers”? Bourne every week seems to be growing into better and better chemistry with Mac Jones.

The Patriots opening drive touchdown was a nice drive that led to the score. Jones threw a beauty of a fade route to Bourne in the right corner of the end zone where he made a really nice catch with Kevin Byard in tight coverage on him.

But Bourne’s second touchdown was one that will be shown on Patriots’ highlight shows for a long time. Facing a 3rd and 6 at the Tennessee 41, Jones hit Bourne on a crosser about a yard in front of the sticks. Bourne raced to the sideline and then turned it upfield, somehow staying in bounds, and then raced down the right sideline for a touchdown that broke the game open 26-13.  For the season Bourne has 42 catches for 623 yards and 5 TDs.

Nick Folk Continues His Excellent Season: While it isn’t a good offensive day when your kicker is attempting six field goals, it is a good day when he makes five of them. Folk’s only blemish was a missed 53-yarder but he was right on the mark with the rest of his kicks.

He made five field goals with a long of 52 and converted all three extra points. Folk is having an outstanding 2021 and while his range is limited to 52-53 yards, he’s been money inside of that range.

J.C. Jackson Is Getting Richer By the Minute: With each passing week, the zeros on the end of Jackson’s next contract keep increasing. Jackson played a big role in two of the biggest plays of the game for the Patriots’ defense.

On the first, a big play for the Titans turned into a disaster. D’Onta Foreman rumbled through a huge hole created by the offensive line and gained 31 yards but Jackson caught up with him and punched the ball out that was recovered by Jalen Mills for a huge turnover.

The second was an interception in the end zone. Tennessee faced a 4th and goal from the 2-yard line, Ryan Tannehill rolled to his right and tried to thread the needle in the back of the end zone. Devin McCourty tipped the ball and Jackson picked it off. Not only did they stop the Titans but it moved the ball to the 20-yard line. This leads us to…

Tennessee Play-calling On that Series Was Strange: The Titans bludgeoned the Patriots on that drive for 73 yards, all of it on the ground except for one pass for 14. So, with a 1st and goal from the 5-yard line, a run up the middle was stopped for a gain of one.  On second down Tannehill passed and it was broken up Kyle Van Noy at the back of the end zone.

A 3rd down run by Foreman was stopped by McCourty and Dugger at the two. On 4th and goal, the Titans for the second time on the drive tried to outsmart themselves by throwing the ball. It was picked off by Jackson, but in reality, it had very little chance of success. The pass looked to be behind Cody Hollister by a good margin.

Tennessee had gashed the Patriots’ run defense all day to the tune of 270 yards. And at the 5-yard line, they decide to pass twice? For all the handwringing about Josh McDaniels’ play-calling, this sequence was a head-scratcher. I expected them to run it four times and win or lose with their strength. “Dance with the ones who ‘brung’ ya”.

Tannehill’s Hot Start Cooled Off Considerably: Tennessee’s success offensively this year has been from running the football and throwing off of play-action. This game started much the same. Tannehill took advantage of the running game asserting itself by completing his first eight passes including one for a TD that narrowed the score to 7-6.

But as the Patriots extended their lead, Tannehill struggled to find open receivers and finished only 3-13 after his hot start. He finished 11-21 for just 93 yards with a TD and an INT. 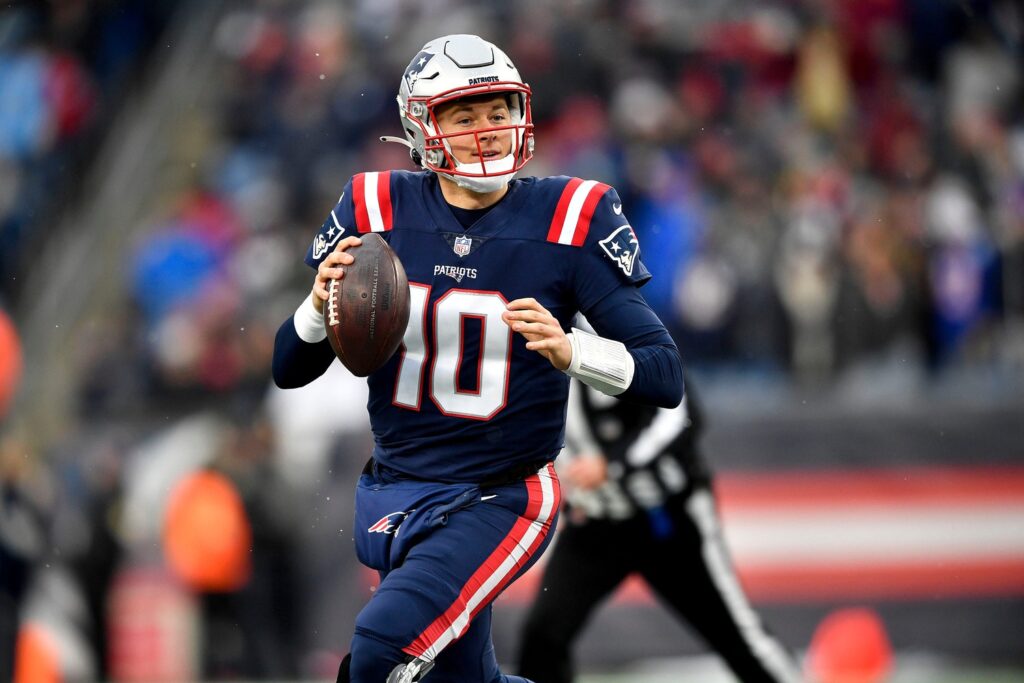 Mac Jones Passed For a Career-High 310 Yards: Jones made some mistakes, he failed to pick up pressure when he should have thrown the ball away. He also missed a wide-open Hunter Henry which should have been a Patriots touchdown. He also threw a pass in the red zone that could have easily been picked off.

But overall Jones was very, very good once again completing 23-32 passes for 310 yards with 2 TDs and 0 INTs. He averaged 9.2 yards per throw and finished with a passer rating of 123.2. He made some outstanding throws, the first touchdown to Bourne was perfectly thrown where only his WR could get it.

On a day where the Patriots running game was grounded for three quarters, Jones stepped up. The lack of the running game hurt in the red zone but the rookie keeps checking off the blocks and looks better every week.

During our keys to the game, we said that Tennessee likes to take away the short passing areas and that Jones would have to throw those deeper intermediate passes. And he did, he threw an absolute dime on a deep sideline throw to Jakobi Meyers and was making those throws consistently all game. Cold weather with a few snow showers was not a factor.

Tennessee Gashed the Patriots Run Defense: The Patriots entered the game ninth in the league against the run (101.7-yard average), but the Titans showed that they have some work to do there. The Titans ran right at the middle of the defense and gashed them for 270 yards. Dontrell Hilliard called up from the PS had 131 yards on just 12 carries including a 68-yard touchdown right before the half that narrowed the lead to just three points.

D’Onta Foreman had 109 yards on 19 carries but the difference was that each lost a costly fumble that ended promising drives. But the Patriots have some work to do.

Jonnu Smith Steps Up Against His Former Team: Sunday was the first time that Smith had to face the former team that drafted him where he spent 53 games. And Smith had his best day as a Patriot. It began with a Jet sweep that gained 9 yards and set the tone for the rest of the day.

Smith was targeted four times and had back-to-back catches of 16 and 13 yards respectively. Later Jones rolled out to his right and had Smith wide open for a gain of 20. He ended up with 58 yards total with 9 rushing and 49 receiving on three catches. Hunter Henry had two catches for 16 but the overthrow from Jones erased what would have been an easy touchdown.

Running Backs Struggle But Perseverance Pays Off: Tennessee had been holding teams to 83 yards per game and for three quarters they had bottled up the Patriots running game. But Josh McDaniels stuck with it and they began to find some room to run late in the game, capped off with a 14-yard touchdown run by Damien Harris.

Harris finished with 40 yards on 11 carries while Rhamondre Stevenson churned out 46 yards on nine carries. By the end of the game, the Patriots still were able to churn out 105 yards. Brandon Bolden didn’t get a lot of mention during the telecast but he finished with 54 yards on 4 receptions. He’s been doing a great job of filling in for James White in the 3rd down role.
____________________

So, the team passed another test and continued their winning streak to six, and leap-frogged the Bills again for the top spot in the AFC East. But the Monday Night Football game next week against Buffalo is a huge test. They have two upcoming games against the Bills in the next three contests along with a game against Indianapolis.

But as Bill Belichick said in his post-game presser, “Look, eight games ain’t enough to win anything or clinch anything, so we’ve got a long way to go,” he said. But they’ll enjoy this one and get back to work on the Bills for a big matchup next Monday.