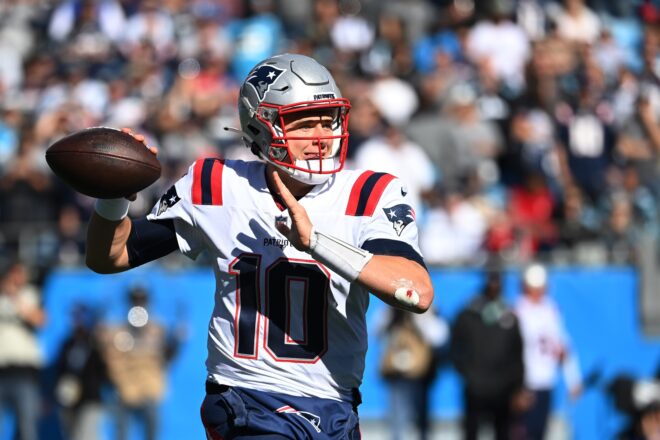 This week’s game is David vs Goliath, except David doesn’t have a slingshot.  The biggest advantage the Atlanta Falcons have is that the game is Thursday night at home.  The short week of preparation and not having to travel is the only thing the Falcons have going for them.  The Patriots have won 4 in a row, averaging 37.5 points scored in those games.  They are also 4-0 on the road this year.  The Patriots have allowed an average of just 14.5 points on the road in those 4 wins.

In Atlanta, everything revolves around the former Boston College Eagle they call Matty Ice.  Matt Ryan is the 14-year veteran, selected by Atlanta 1st #3 overall in the 2008 draft is having a fine season despite his lack of offensive weapons.  Ryan has thrown 218 completions on 322 throws, 67.7% completion percentage, 2.274 yards, 15 TDs to 8 INTs, and the #11 QB rating by Pro Football Focus (PFF).  By comparison, Tom Brady is #1 and Mac Jones is #5.   He has been sacked 16 times.  However, last week Ryan was pulled after putting up a dismal 9 of 21, 117 yards, and 2 INTs in the humbling loss to the Cowboys.  Overall, the passing game is ranked 21st in the league.

Running back has been a mess all season and ranks 30th in the league.  Atlanta signed Mike Davis away from the Panthers to be their number one back.  Davis has rushed 88 times for 289 yards, 3.3 average, 1 TD.  Lately, it has been former Patriots Cordarelle Patterson as the top back. His 77 carries for 303 yards, 3.9 average and 2 TDs are tops for the team.  Patterson is suffering from an ankle injury and because of the short week, he is expected to miss the game. Former Giant Wayne Gallman is next in line.

The offensive line is the reason why the Falcons can’t run the ball.  They have talent starting with 8-year vet Jake Matthews.  Rookie Jalen Mayfield was a 3rd round pick from Michigan this year.  Center Matt Hennessy from Temple was a Rimington Award finalist as the best Center in College football.  RG is manned by former BC lineman Chris Lindstrom a 1st round selection #14 in 2019.  Kaleb McGary is the RT and was also a 2019 1st round pick #31.  Individually they should be better than they are performing.

The Wide Receiver position has turned into a disaster.  They traded Julio Jones, believing that Calvin Ridley was ready to assume the #1 receiver moniker.  Ridley has disclosed he is having emotional issues and has been out since week 6.  He was placed on the Non-Football Injury list on November 5th. That leaves Olamide Zaccheaus ( 15 catches on 29 targets, 194, 12.9, and 3 TDs), Russell Gage ( and former UMass alum Tajae Sharpe (17 catches on 26 targets, 170 yards, 10.0 avg, no TDs) as the top receivers with Christian Blake and Frank Darby as backups.   Cordarelle Patterson was the top receiver on the team (39-49 for 473 yards. 12.1 average, 5 TDs).  Patterson’s loss, especially with his versatility top lay both receiver and back hurts Atlanta tremendously.

At Tight End the Falcons have a good one in Kyle Pitts.  He leads the team in receptions (40) and yards (606) but only has 1 TD.  I think Atlanta made a big mistake drafting Pitts.  If they had traded the #4 overall pick and later picked a QB like Mac Jones to learn under Matt Ryan, they would be better off.  Glad they didn’t because we would not have the future of the franchise in Mac Jones.  Pitts is more of a WR than a pure TE.  He is like Travis Kelce, TE in name only.  Hayden Hurst is a terrific blocker and capable receiver but he was listed as Did Not Practice in Tuesdays practice.

On Defense, they are the worst in the league in points allowed per game at 29.2.

The defensive line is ranked 7th against the run.  Last week the Patriots obliterated the #3 team (CLE) against the run for 184 yards rushing.  The Patriots and their offensive line are establishing themselves as a run-heavy team.   Again this week it will be which unit imposes their will.  The Patriots’ right side with Shaq Mason, Trent Brown, and sometimes extra TE Michael Onwenu are a devastating group.  It should be quite the battle between RDE Grady Jarrett (remember him and his 3 sacks of Tom Brady in Super Bowl LI).  Jarret has only one sack and the DL as a whole is having a poor season sacking the QB.  However, Jarrett has 23 disruptions and is very stout vs the run.   Tyeler Davison at the Nose Tackle position has 27 tackles.  Jonathan Bullard has only 13 tackles and is listed as questionable.  Former Patriots Mike Pennel is Bullard’s backup.

Linebacker is the best position on the Falcons Defense.  Foyesade Oluokun is the team-leading tackler with 100.  If you don’t know Oluokun, you should.  He was drafted by Atlanta in 2018 in the 6th round out of Yale.  At 6’ 2, 215 lbs he is more like a safety than a Linebacker.  The Patriots have two of those types of players in Adrian Phillips and Kyle Dugger.  Oluokun ran a 4.48 40 yard dash which is more like WRs and RBs.  The other Linebacker you already know,  Deion Jones.  He flew all over the field in Super Bowl LI against the Pats.  Dante Fowler is listed as the weak side LB but he is more of a DE than LB.  At 6’3”, 255 lbs he has linebacker size. The 5th year vet was the #3 overall pick in the 2015 draft. Adetokunbo Ogundeji (say that three times and a duck will appear)  is a rookie from Notre Dame trying to convert from DE to OLB.  He is 6’4” 268 lbs and is more DE than LB.  I believe he can be exploited in pass coverage.

The secondary as a unit is ranked 21st.  AJ Terrell and Fabian Moreau are the starting cornerbacks.  Terrell is a 2020 1st round #16 pick from Clemson.  At 6’ 1” 198 lbs, Terrel runs a 4.37 40.   He has 36 tackles, no interception, and 6 pass breakups (PBUs).  Moreau has 32 tackles and 1 sack, no interceptions, and 8 PBUs.  Safety Ed Harris leads the secondary with 38 tackles, no interceptions, and 8 PBUs.  Long-time Patriots Duron Harmon is the starting Strong Safety.  He can and will be exploited by the Patriots.

The Patterson injury throws Avery Williams into the Kickoff duties.  Again a big loss, Patterson was averaging 23.7yards per return.  Williams only averages 12.6.  Dustin Colquitt has been a very good punter for a long time.  Did you know that kicker Younghoe Koo was a Patriot for 10 days on the Practice Squad before he was poached?  Koo is having a good season making 15 of 16 FGs and all 17 extra-point attempts.  It looks like Williams will double as Punt Return and Kickoff Return man.

The Patriots have three players that have an equal or greater number of interceptions as the entire Falcons team – 3.

The Patriots are the only team in the NFL with 3 or more Interceptions by three players.  JC Jackson – 5, Kyle Dugger – 3, Adrian Phillps -3

READ NEXT:
These Are the Top Ten NFL Scorers of All Time
Posted Under: 2021 Patriots Season