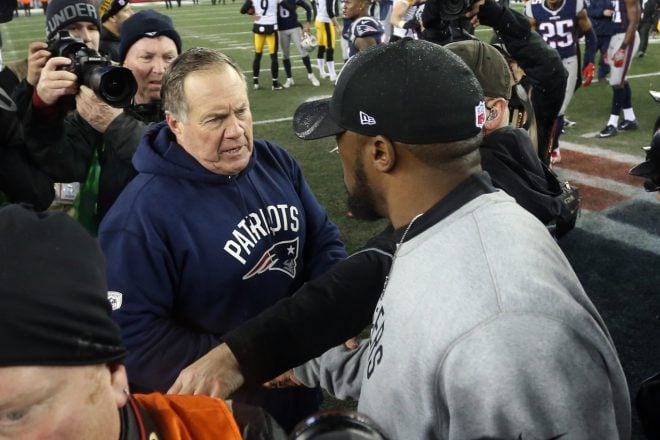 With speculation circulating that Mike Tomlin might be potentially trying his hand at the college ranks, it certainly led to an exciting finish to the Steelers’ coach’s press conference when the question was eventually asked on Tuesday.

With Pittsburgh coming off a bye and a match-up against the Browns on deck, Tomlin met with the media on Tuesday to talk about their upcoming opponent.

A handful of reporters asked about various aspects of the contest, but former WEEI personality Tim Benz, who is now a reporter for the Tribune-Review in Pittsburgh, took the bullet for the other reporters who may have seemingly been about to ask the question.

And make no mistake, Tomlin was extremely offended and he blew up before walking away from the podium extremely aggravated.

“Hey guys, I don’t have time for that speculation,” said Tomlin.  “I mean, that’s a joke to me.  I’ve got one of the best jobs in all of professional sports, why would I have any interest in coaching college football?”

“That will be the last time that I address it.  And not only today, but moving forward.  Never say never, but – never,” continued Tomlin, pausing and nodding to make sure he got his point across, before offering up a quick, “O.K.?”

“Anybody else got any questions about any college jobs, there’s not a booster with a big enough blank check.”

From there, the media relations director asked if there were any further questions and as the media room sat silent, Tomlin raised his tone, and made sure those on hand heard him loud and clear.

He then got up, clearly offended by the question, and angrily walked off.

"There's not a booster with a big enough blank check."

Steelers coach Mike Tomlin emphatically states that he is not interested in the USC coaching job.

For now, the rumors should be the least of his concerns. The Steelers are currently 3-3 and last in the AFC North. They’re also 27th in total yards and 26th in points per game.

However, thanks to the bye, they’ve had a little time to get healthy and they’ve also won two in a row with an opportunity to potentially get above .500 when they head to Cleveland to take on the Browns.

But anyone wondering if Tomlin might move to the college coaching ranks, after Tuesday’s media appearance, he essentially slammed the door in dramatic fashion.

Needless to say, that should close the book on those rumors, likely for good.