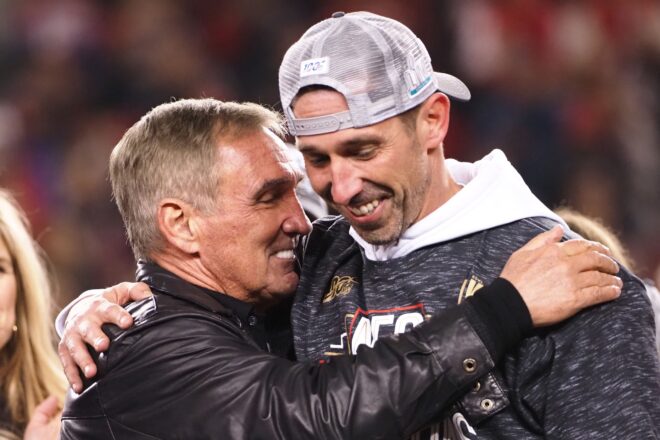 While the story in San Francisco remains focused on the self-imposed quarterback controversy the 49ers are dealing with, Kyle Shanahan is slowly seeing the spotlight turn on him and it’s definitely not in a good way.

Sunday night’s loss to the Colts remains a frustrating one, especially considering the 49ers had Indianapolis on the ropes at multiple times throughout that contest.  Instead, turnovers and coaching miscues ultimately led to mistakes they couldn’t come back from and sitting at 2-4, things are starting to look a little bleak for Shanahan’s club.

The thought seemed to be that adding Trey Lance this offseason was the smart move, since the 49ers seemed to have already made their decision about the future when it came to Jimmy Garoppolo.  Shanahan played it cool during preseason and stuck with Garoppolo, but that all fell apart when they got off to a slow start and Garoppolo got hurt.

On Sunday night, when they needed a win to turn their season around, a downpour created a tough environment and it ended up being the Colts who were able to fight through and come away with the victory.  That left San Francisco frustrated and disappointed, with Shanahan admitting that when it came to whether or not Garoppolo would start this weekend, his answer was simply, “I would guess so.”

He added that their problems go beyond the quarterback position, and that the coaching staff has some tough decisions to make.

“I have got a whole team to worry about,” Shanahan said. “I’m not just thinking about the quarterback situation right now. I’ll evaluate everything, see where our team’s at, see who gives us the best chance to beat Chicago and see what our options are … But we’ve got a lot of things to figure out.”

Having lost four in a row, any shot the 49ers had at the division certainly appear to be a long shot.  They’re in a tough NFC West Division, trailing both the 6-1 Rams and the 7-0 Cardinals with 10 games left to play.  Even earning a Wild Card birth would be tough if they can’t at least string some wins together and make a run.

Whether or not Garoppolo has the opportunity to maintain his job is the big question they seem to have.  All indications seem to be that Lance is the guy they’d prefer to be out there, which obviously makes sense considering Garoppolo’s contract.  With Garoppolo not seizing the opportunity, it’s created a roller-coaster of a season that Shanahan should have obviously known was coming.

Things definitely haven’t gone smoothly.  And unless things start to turn around, there seems to be some doubt creeping in about Shanahan’s long-term outlook unless he can start giving people a reason to believe that their current issues are only temporary.

As a result, it’s an odd situation and the fate of their season will likely be decided over the next few weeks.  To add to that, the road certainly isn’t an easy one.  They head to Chicago this weekend to play the Bears, followed by a visit by a Cardinals club that is on a tear.  From there, they also get a visit by the Rams, who are also playing well.

By the time they get to that point, 49ers fans will likely have a pretty good idea of whether or not their team will have at getting a shot to play in January.

For now, Shanahan told reporters that he deserves the criticism he’s gotten.  Unfortunately, if they lose on Sunday in Chicago, he also likely knows things certainly won’t get any easier.

“You lose four games in a row, I’m the head coach of this team, I expect it and I deserve it,” Shanahan said.