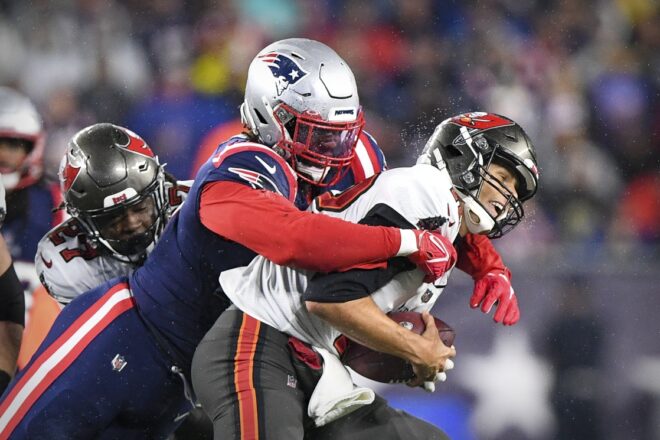 Sunday’s night’s battle against the Buccaneers came down to the end and unfortunately, it was Tom Brady and the Buccaneers who came away with the 19-17 win at Gillette Stadium.

Bill Belichick put together a solid game plan to slow down the former Patriots QB and keep it close, while rookie Mac Jones stepped up and put together a terrific effort, which included a stretch where the quarterback hit 19 straight passes.  He finished the night 31-of-40 for 275 yards with two touchdowns, including a drive at the end of the game where he put kicker Nick Folk in position to attempt what would have been the go-ahead field goal.

Instead, Folk’s 56yd field attempt goal dinged off the left upright and as the ball fell to the turf, so did New England’s hope of getting back in the win column.

At 1-3, the Patriots are now in a tough place heading into the rest of the season.  This loss also drops them to 0-3 at home this year, which means they’re going to have to win quite a few games on the road to finish the season.  New England now has to play seven of their final 13 games away from Gillette Stadium, and since 11-6 might be the record they’ll need to get into the postseason, that would require a 10-3 finish if they hope to earn a playoff berth.

That’s a big ask, especially with a schedule that includes a game out in Houston next Sunday against the Texans (who have beaten them in each of their last two meetings).  They’ll then play two games at home against a surging Cowboys team, followed by a visit from an improved Jets club, and then they’ll play two straight on the road against the Chargers and Panthers.

After that, they’ll play the Browns at home, followed by a trip to Atlanta to face the Flacons, and then they’ll come home to battle the Titans.

Oh, and then after that, they have to head to Buffalo to face the Bills for the first time this season.

That’s a brutal stretch, and they’ll essentially need every one of those wins heading into the bye week.  Somewhere in there, they can really only afford to lose three more games if they hope to be a playoff team, which given all the offseason additions is obviously the goal.  To this point, they’ve instead been a team that has been so close but hasn’t quite been able to put it all together.

Their defense hasn’t been lights out but they’re playing well enough to keep them in the games.  They stepped up in a big way Sunday night and kept it close enough where the offense was in a position to pull off the victory.  But they’re going to have to find a way to win these types of games, which has been an uncharacteristic trend we’re not used to seeing.

However, we’ve seen enough improvement to believe things could start to turn around.  If Jones can get some protection and build off a pretty terrific showing, it’s hard not to feel like the potential is there for them to make a run.

Can they pull it off?  It’s definitely possible.  It’s just unfortunate that another great effort saw them come up short.

For now, losing another winnable game certainly stings and it obviously sets up a challenge heading into the rest of the season.

We’ll find out in the coming weeks if they’re up for it.