1 year ago at 8:11 am ET
Follow @SteveB7SFG
Posted Under: Patriots News 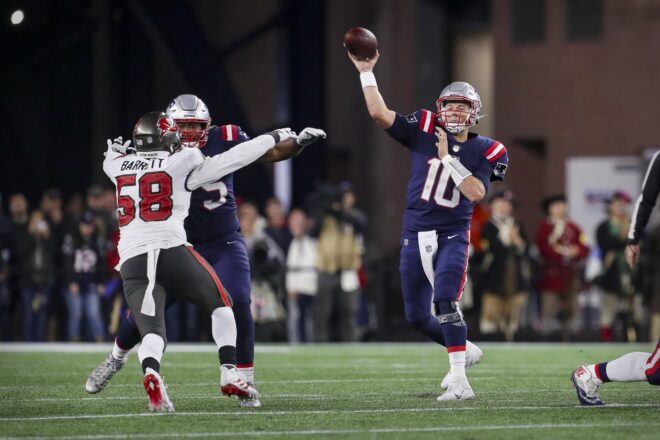 It went right down to the wire, but Tom Brady did what he had always done in 20 years with the Patriots, leading them to a late go-ahead scoring drive, a 48-yard field goal by Ryan Succop with two minutes to go.

But Mac Jones led the Patriots down the field and had the team poised to wrest back the lead with 59 seconds to go but Nick Folk’s 56-yard field goal, doinked off the upright and the Bucs held on for a hard-fought 19-17 win.

While there are no moral victories in the NFL, there were plenty of positives to take away from the game, which was played in constant rain, which affected both teams. The Patriots played their best 60 minutes of football and Bill Belichick’s defensive game plan, which harkened back to ones similar that he ran against other prolific passing offenses slowed down the Super Bowl champs, and put his team in a position to win.

Mac Jones was very impressive as the rookie had zero running game (-1 yard) and spotty protection but hung in there and made mostly good decisions, went through his progressions, and delivered the ball accurately. He finished 31-40 for 275 yards with 2 TDs and an INT.

Defensive Game Plan Effective: As we put out in our pregame keys, the Patriots played extra defensive backs, flooding the throwing lanes and frustrating Brady and the Bucs’ high-powered air attack.  Brady completed just 51 percent of his throws 22-43 for 269 yards with 0 TDs and 0 INTs.

With the light package, they were daring Tampa to run, and although Leonard Fournette ran for 91 yards, it was by design and the Patriots held Tampa to just one touchdown, forcing them to kick four field goals. Bill Belichick got the defense to play a terrific game and the loss shouldn’t take away from that.

Where’s the Beef, NFL? Brady set the all-time regular-season passing record, passing Drew Brees, who was in attendance with the NBC crew with a 28-yard pass to Mike Evans in the first quarter. But to say that the league recognized it in a low-key manner was akin to saying the Titanic had an ice problem.

The Patriots put up a message on the Jumbotron and both the Patriots and Bucs tweeted it out on social media. However, on the field? Nada. Contrast that with the celebration the league did with Brees a few years ago. Good job Roger.

Ball Security, Penalties Costly Again: The Patriots turned the ball over two times and were penalized more than the Bucs, (despite Rich Eisen’s tweet that they were getting all the calls), while not forcing any turnovers of their own.

That factor is usually one that signifies a losing effort, and tonight was no exception. The team may have generated one on STs but the 15-yard penalty on Matthew Slater at second glance was the correct one.

The second Patriots turnover hurt and probably took points off the board. They had stuffed the Bucs deep in their zone, and a punt return by Gunner Olszewski put their starting position at the Bucs 38-yard line. After Damien Harris picked up a 1st down at the 29, a short pass to J.J. Taylor at the 28 was fumbled and recovered by Tampa.

Patriots Secondary Has Strong Showing: The Buccaneers passing game is certainly a very tough one to defend, and although Brady threw for 269 yards, the secondary played a very good, tough game and competed hard all night.

If we said prior to the game that the Patriots defense would hold Brady to 0 TDs and just 1-4 in the red zone, you’d probably think that was a win…

Jones Growing Up Quickly: Can’t say enough about Jones’ performance tonight. Todd Bowles did what everyone is doing and tried to blitz the heck out of the rookie. He was sacked four times and hit 12 times. But he hung tough and consistently delivered the ball accurately, at one point completing 19 passes in a row.

With a non-existent running game, Josh McDaniels put the game in his hands, spreading out the Bucs’ defense and allowing him to work the passing game. And his ability to make the correct calls in the hurry-up offense and his poise in the pocket is very impressive.

His side-step of a free blitzing Lavonte David, sliding in the pocket was Brady-esque. And he handled the blitz well completing 12-14 for 137 yards with a TD and a pick.

He got respect from his opponents.

“He played his tail off,” Tampa head coach Bruce Arians said. “He gave his team a chance to win.” Now they have to find a way to protect him.

Tight Ends Produce in the Red Zone: We’ve all been calling for McDaniels to target the new tight ends in the red zone. And tonight they did just that, with Hunter Henry and Jonnu Smith each getting a touchdown reception from Jones.

While their overall production wasn’t great, (7 catches, 46 yards combined), the fact that they were targeted …and produced in the red zone was a very good sign of things to come. Jones sold a great play-action fake and delivered to a wide-open Smith for his score.

Judon Continues to Shine: Matthew Judon has been a huge addition to the Patriots’ defense. He had a sack, two QB hits, and two tackles for loss in another big game for him. He drew a huge hands to the face call that negated a big Tampa play.

It seemed like he was being held all game long but his impact has been tremendous at the quarter mark (sort of) for the season.

The Patriots go back out on the road to take on the Texans next Sunday.