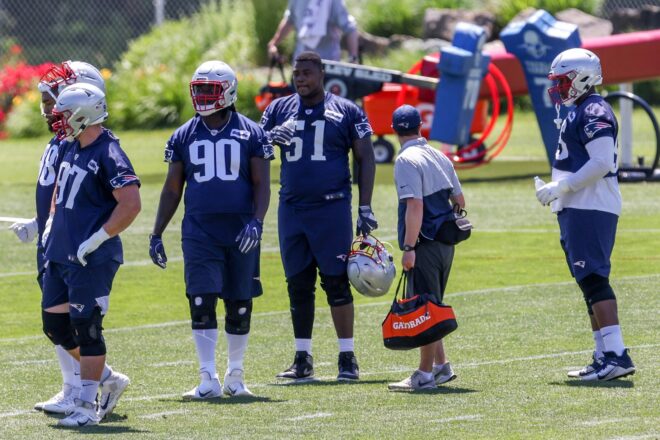 The New England Patriots began the first of two joint practices with the New York Giants on the Gillette Stadium practice fields on Wednesday in some tough late summer heat.

A notable storyline heading into the session was how would quarterback Mac Jones perform with starting quarterback reps due to the absence of Cam Newton over a “misunderstanding” with COVID-19 protocols?

As it turns out, Jones wound up taking full advantage of the newfound opportunity and put together his best outing of the summer, at one point even completing 14 consecutive passes against the Giants defense.

The Boston Herald’s Andrew Callahan shared more of his thoughts from day one over Twitter.

Mac Jones just completed 18 straight passes against the Giants in team drills around one "sack." His streak ended with a pass tipped at the ling of scrimmage

This has been his best practice as a Patriot.

– Jones finished his closing 2-minute drill with perfect throws: a 30-yard corner route to Jakobi Meters that split two defenders and back-corner TD strike to James White.
– Belichick went out his way to give Jones an atta boy after.
– Meyers caught 7 of 8 passes in team drills.

As for how the rest of practice went, you can check out additional sights and sounds shared across social media below.

TE Hunter Henry, in the red No. 85 non-contact jersey, gets some work in early in practice. pic.twitter.com/pJsR8Rbw6P

JJ Taylor is so fast pic.twitter.com/EjDPsxjW8j

#Patriots RBs Rhamondre Stevenson and J.J. Taylor work on blocking with each other. The team seems to be showing a lot of faith in them after trading Sony Michel this morning. pic.twitter.com/RIFvGHIpKv

Mac Jones to Jakobi Meyers in the end zone pic.twitter.com/xaWy1G2Qbr

Fight! A melee just broke out between Patriots OLs and Giants DLs during 1-on-1s. Didn’t catch what sparked it, but every player on both teams jumped in. Spotted Isaiah Wynn and Korey Cunningham at the bottom of the pile. Every Pats OL and coach Carmen Bricillo ran a lap after

Highlight-reel touchdown pass from Mac Jones to Jakobi Meyers over Logan Ryan and Darnay Holmes. Around 35 yards. Meyers was slow to get up after the play, but he’s staying on the sideline.

A few familiar faces in the house today. pic.twitter.com/e2HZQm2LES

"Overall, I thought it was a productive day for the offense."

The Patriots will be back in action for day two tomorrow with the Giants in the last public practice in Foxborough this season before they travel to New Jersey this weekend for the preseason finale.