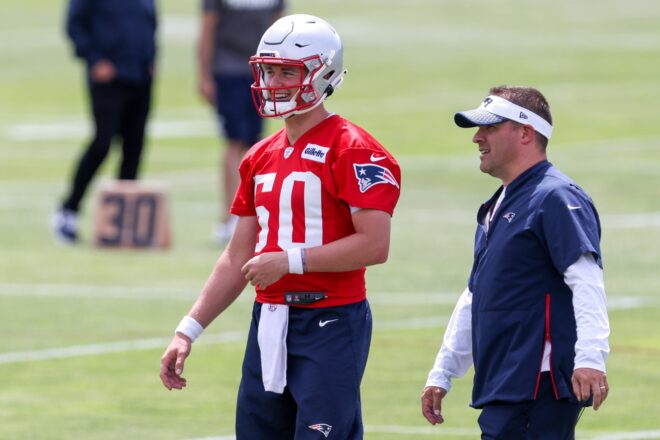 The New England Patriots continued into day’s seven and eight of training camp this week in Foxborough.

Use of pads wound up being short lived following Tuesday’s camp session as the team was back in shorts, T-shorts and shells Wednesday.

During the Wednesday session, the quarterbacks struggled a bit more as Cam Newton, Mac Jones and Brian Hoyer threw interceptions.

The Athletic’s Jeff Howe tweeted out a few of his Wednesday takeaways from the quarterback battle.

Cam Newton struggled with accuracy today and was 7 of 13 (one drop) with 2 INTs. He’s now got 5 INTs in camp.

Mac Jones was sharp throughout and was 17 of 23 (three drops, one incompletion when Henry tripped) with an INT on a dropped ball. He’s got 2 INTs in camp.

N’Keal Harry had a terrific day with five catches from Mac Jones and one from Cam Newton. The QBs were perfect when throwing his way in team drills. Harry only had 5 catches on 11 targets during team drills in the first 6 practices.

A day later, rain became the story of Thursday as the team battled its way through wet and slippery conditions on the practice fields but back in pads once again. As a result, both Newton and Jones struggled some but Mac appeared to adjust better in the weather.

Second consecutive strong practice from Mac Jones. Accurate despite some tough conditions. Good pace to the offense. Best quarterback out there in today’s fully-padded session. Turnaround for him after a rough Tuesday practice in full pads.

As for what else was seen on the field, check out all the best sights and sounds shared across social media from both the team and local media below.

Cam Newton to Kristian Wilkerson, a sleeper to make the final 53. pic.twitter.com/m5UKUdIVAX

Sure it's uncontested, but this is one of the better catches we've seen during the media portion of #Patriots Training Camp.

Troy Brown says he believes he and Jerod Mayo bring “a sense of history” to the coaching staff, and can help maintain the culture in the building pic.twitter.com/X8MsEJ9Fdg

“At the end of the day, Training Camp’s about fundamentals.”

#Patriots QBs getting their work in on a rainy day in Foxboro – #PatsCamp #wbz @wbz pic.twitter.com/TomwmlzWgs

While Mac Jones had a solid day in the rain, the #Patriots put a huge emphasis on ball security at all times.

Chung must have said something pretty funny because he got a pretty good smile out of Bill@NBC10Boston @RaulNBCBoston pic.twitter.com/1O4zmuVjcj

As Bill Belichick says, "No days off." Even for photogs. So, we slapped on the rain gear and slogged through the sloppy track at #Patriots camp. For the people 😂 pic.twitter.com/klO2RGMziN

Question: How disappointed will you be to finally give up No. 50 next week, per NFL rules?

Mac Jones (laughing): “I don’t know if I would have kept it…”

(Odds high on No. 10, which he wore in high school and college, and is available in New England.) pic.twitter.com/2Em6Ng35FO

Mac Jones is having fun

Patriots’ HC Bill Belichick on his team practicing in the rain today: "If it rains, it rains. If it doesn't, it doesn't. If it's hot, it's hot. If it's not, then that's what it is.”

J.C. Jackson broke up 3 passes today. He had an interception and a PBU yesterday and another PBU Monday, so he's been all over the ball this week. His 7 pass defenses (1 INT, 6 PBU) in team drills lead the way in training camp.

Reps in the rain. pic.twitter.com/1dmQJHXT2T

By: Russ Goldman
In this episode, we look back at the Patriots loss to the Bills, Later on, we preview the upcoming game against the Cardinals.
11 hours ago