Earlier this week, the New England Patriots formally began organized team activities and with it came a list of updated jersey numbers that included both signed and newly signed veterans. The rookies will have their jersey numbers assigned at a later date according to the Patriots.

The list of numbers was revealed by way of a mock album back cover created by the Patriots media team.

Back in April, NFL owners passed a new, relaxed rule that now allows for numbers 1-49 to be worn by tight ends, wide receivers, running backs and defensive backs.

As evident by the list above, a few Patriots took immediate advantage of the changes.

In prior seasons, only quarterbacks, kickers and punters were permitted to wear single digit jersey numbers.

By: Ian Logue
Considering the reaction coming off the field on Sunday by Mac Jones after Calais Cambpell landed on his left ankle, it sounds like the news…
5 mins ago

By: Ian Logue
Some thoughts following the New England Patriots dropping a frustrating one to the Baltimore Ravens on Sunday.
1 hour ago

By: Mark Morse
Mac Jones's decision-making has been awful. He has regressed badly from last year.  I strictly blame the coaches and the change of offense.  Who does…
3 hours ago 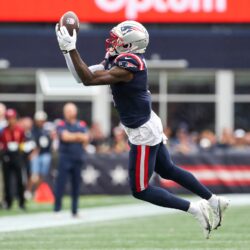 Jackson Too Much For Mistake Prone Patriots, Game Observations

By: Steve Balestrieri
Jackson accounted for five touchdowns, four passing, and one rushing, as he looks to be an early season MVP candidate.
6 hours ago

By: Ian Logue
Coming off of Sunday's 37-26 loss to the Ravens, New England Patriots QB Mac Jones' immediate future is obviously the biggest question, which now changes…
17 hours ago
wpDiscuz