The Patriots have many questions heading into the 2019 season at wide receiver. Julian Edelman returns, the Super Bowl LIII MVP is still at the top of his game but at 33, one has to wonder how much longer he can perform at a high level.

After him, the situation gets murkier. Phillip Dorsett has been fine whenever his number has been called but his production really could use an increase. Demaryius Thomas’s numbers have been steadily going down the past several years and now he’s coming off of an Achilles injury. Josh Gordon is suspended indefinitely and no one knows if he’ll be allowed to play this year.

The Patriots drafted N’Keal Harry in the first round of the draft this spring and expectations with him are high. But rookie wide receivers have struggled to make an impact here in the past. Braxton Berrios had a very strong spring but spent his entire rookie season on IR. Maurice Harris and Dontrelle Inman are coming on to try to carve out roles for themselves after playing for the Redskins and Colts respectively.

So, the opportunities are there for several players to carve out roles for themselves once training camp opens. There are 12 players that should be vying for reps, and possibly 13 if Thomas is ready to go. Gordon is forbidden to enter the facility or work out with the team during his suspension. Let’s take a look at who is in good shape and who has a lot of work to do at the wide receiver position

Discussion – Edelman, Dorsett, Slater, and Harry are all locks. Obviously, the conversation starts with Julian Edelman. Yes, Edelman is 33 but if you watched him in the Super Bowl he was uncoverable. The Rams threw several different defensive backs on him and nobody could lock him down. I watched him thru all three days of minicamp and he looks ready to go again.

Dorsett was getting plenty of reps early last year but lost those after Gordon was brought in. The hope here is that he’ll be able to replicate what he did last year, and with an additional year in the system, be able to add to it.

Slater is a WR in name only but is a Special Teams’ captain and one of the best at what he does both on and off the field. Harry is a first-round draft pick who has incredible upside but is just a rookie. With a first-round draft pedigree, he’s automatically on the 53-man roster.

This is where it gets interesting. Berrios had a very strong spring but is in no way a lock at this point. He has a long way to go but is definitely trending in the right direction. The smaller but quick slot receiver recognizes the opportunity in front of him. Mike Reiss of ESPN has written that Berrios has already reported into camp. The hope is that he could fit into that Danny Amendola role in the Patriots offense.

Harris likewise had a very strong spring, catching nearly everything thrown his way with a few nice highlight-reel catches during minicamp. Can he do it again when the secondary players are allowed contact? Inman, on the other hand, didn’t have a good week at minicamp. He didn’t catch a single pass in team drills during the three sessions. He has a lot of ground to make up.

Meyers is an interesting addition. A former QB turned WR, Meyers has good size for the position, (6’2, 203) with very good hands, tight route-running and the willingness to go into contested areas. He doesn’t have great top-end speed but could be an oversized slot receiver. What was intriguing about him was that during a side session with Tom Brady, Brian Hoyer, and Josh McDaniels, during minicamp, Meyers was brought in with Harry to work on route selection. May end being nothing, but it could mean they have a plan in mind for him.

Patterson was on the practice squad a year ago but along with Davis, and Olszewski are all facing long odds of making the roster.

In a perfect world, Gordon would get reinstated and Thomas would come back better than new. But we don’t live in a perfect world and the fact is, the Patriots can’t rely on Gordon being reinstated any time soon, if at all. And Thomas may end up on PUP to begin the season. That means other players will have to step up….Questions, questions. This will make training camp and the preseason so compelling this summer. 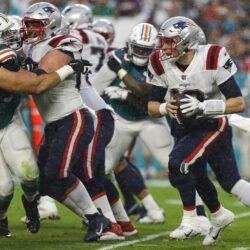 Patriots Limp Into Postseason With a 33-24 Stinker To Miami

By: Steve Balestrieri
The Patriots' run defense is a major point of concern entering the playoffs and regardless of who their opponent is,
4 days ago

By: Bob George
The Patriots once again played bad (at times) football and once again showed how much trouble they have winning in Miami.
4 days ago