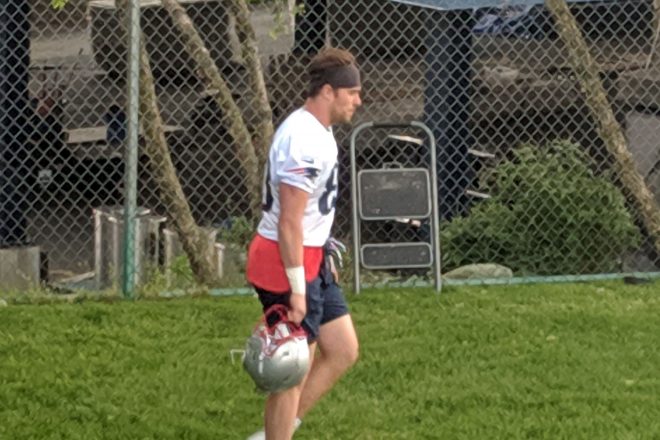 The Patriots have been forced to totally revamp their tight end position this season as all three players on the roster from last year are gone. Rob Gronkowski retired and although rumors are that he’s coming back later this year, he’s not walking thru that door anytime soon…if at all. Dwayne Allen left via free agency and Jacob Hollister was traded.

The team was beginning with a clean slate. And there were/are questions all around. Old friend Ben Watson was brought back to the team after briefly flirting with retirement, the team also picked up Matt LaCosse with a two-year, $2.8 million dollar deal during free agency.

The team also signed Austin Seferian-Jenkins during the spring, but he had some personal issues to be worked out and was given his release. Would he be welcomed back if those issues are behind him? No one really knows, but I wouldn’t bank on his return this year.

Watson is suspended for the first four games of the season due to testing positive for performance-enhancing drugs. LaCosse has appeared in 22 games in his career and had 24 catches for 250 yards and a touchdown for the Broncos last year in 15 games.

The only holdover was practice squad player Stephen Anderson who was called up to the active roster at the end of the season. The team also has Ryan Izzo who spent the year on IR and UDFA Andrew Beck.

With the state of the position, everyone had the Patriots dipping into the 2019 NFL draft early for one of the premier tight ends that were coming out. And true to form, Bill Belichick did the opposite, eschewing all of them. Many of the journalists who cover the NFL had the Patriots trying to swing a deal for a tight end, with Viking Kyle Rudolph at the top of the list. There have also been persistent rumors about them trying to make a deal for the Tampa Bay Bucs, Cameron Brate. But as of now, that’s all it has been, being rumors

So with training camp just around the corner, let’s take a quick look at the tight ends on the roster and see how they stack up.

Discussion – If there is a position the Patriots could swing a deal for during the summer, this would be it. That being said, they can probably piece together the production they received at tight end last season with who they have right now. With Gronkowski hobbling for much of last year and Hollister/Allen not producing, the total production from the tight end position was 54 catches, 761 yards, and 3 TDs.

What they won’t be able to replicate is the amount of coverage that Gronkowski would consistently draw away from the other receivers while he was on the field. Watson, while 38 years old, can still move well, but he won’t be available for the first month.

That means, for now, everything is going to go thru LaCosse for better or worse. After watching him at minicamp, he moves better than I had originally believed and shows good hands for hauling in the ball. Anderson is more of flex or a “move” tight end while Izzo was well thought of by the coaching staff, but is more of a blocking tight end. He’ll have to show he is capable of more.

Beck was given the most guaranteed money by the Patriots of any of their UDFAs ($115,000), so he has that going for him. Beck was used mostly as a blocker at Texas but did contribute with 28 catches for 281 yards and two touchdowns for the Longhorns. He was an First Team, All-Big 12 all-star in 2018.

So, barring a trade either during camp or into the season, this is who the Patriots will enter the season with at the tight end position. After a decade of dominance there, things are going to change.