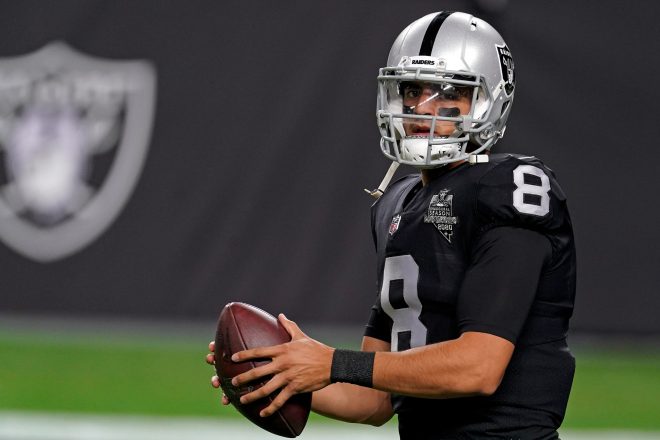 While the Las Vegas Raiders may still be trying to get a trade done for back-up quarterback Marcus Mariota, it appears time may be ticking down for them.

Up to this point, they’ve been unable to find a suitor largely due to the escalators in his contract that would reach a point where most teams seem to appear reluctant to take his deal on.  Now, according to the NFL Network’s Ian Rapoport, Las Vegas is trying to convince Mariota to take a pay cut and if he refuses, they’ll be forced to let him go.

That appears to be what Mariota is looking for, as both he and his agent seem to feel the veteran QB will have an opportunity to start for another franchise.

Who that might be is the next question.  The Patriots obviously have Cam Newton in the fold but it’s possible they could bring Mariota in to compete with Newton and Jarrett Stidham for the starting role.  However, we still don’t know what New England’s long-term plans are, which could make the possibility of Mariota’s addition a non-starter.

As for opportunities elsewhere, it’s tough to say where Mariota might land.  It’s become a bit of a strange reality this offseason that there’s not exactly a lot of obvious choices when it comes to teams in need of quarterbacks.  Carolina remains a possibility if they don’t land Deshaun Watson, as does Houston if Watson is moved and they make that deal.  But after that, it’s definitely a bit of a question mark.

Either way, Mariota seems like he’s on the verge of hitting the market and after what’s already been a surprising offseason, it should be interesting to see where he ends up.