2 years ago at 8:17 am ET
Follow @IanLogue
Posted Under: Patriots News 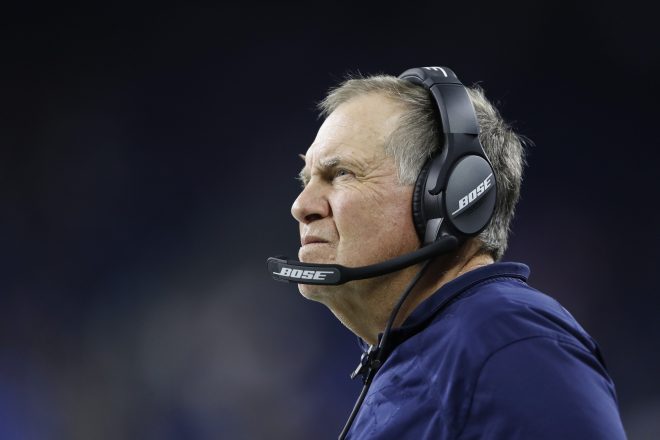 EDITORIAL NOTE: This is a new daily feature to get you up-to-date each day during the week.

Some quick news and notes on this Tuesday.

1) With the Patriots obviously in need of a quarterback heading into 2021, Mike Reiss was on ESPN’s “Get Up” on Monday and discussed how he believes things will play out in the coming weeks.  One thing Reiss pointed out was that the priority needs to be signing one early in free agency, especially as they try and revamp the offense.

Reiss’ reasoning is that who they bring in will be key in trying to lure potential free agents.

“There is one other thought from those around this situation that timing is important for [the Patriots] to get a quarterback for the start of free agency,” said Reiss via WEEI.com.  “So if they are out recruiting a top receiver or a top tight end, that player knows who might be throwing them the football, so that aspect is part of this conversation as well.”

That is an aspect that is going to be key, especially as they try and potentially bolster a receiving core that is in need of an impact player to complement their current group.  Players want someone who can get them the football and as it currently stands, Jarrett Stidham and Brian Hoyer are likely not going to excite anyone.

A couple of potential scenarios that have been thrown around could be the club making a trade with the 49ers for Jimmy Garoppolo, or the Raiders for Marcus Mariota.  Or they could go after a free agent like Mitchell Trubisky.  Garoppolo remains a player who many believe could be targeted, but that will still depend on whether or not the 49ers find the better option they seem to be looking for.

This remains the biggest focus after a 7-9 season but unlike last offseason, getting it done early would certainly be the preferred outcome.

2) The NFL Network’s Tom Pelissero reported on Monday that the Patriots are expected to hire former Jets assistant Bo Hardegree to their coaching staff.  Hardegree is expected to help fill the void at quarterback’s coach, which became available following the departure of Jedd Fisch after he was hired as the head coach for the University of Arizona.

Hardegree is no stranger to the AFC East, having spent time in Miami as their QB coach from 2016-2018, as well as working as an offensive assistant for the previous two seasons with the Jets.

He originally started his NFL career in Denver back in 2014 as an offensive quality control coach, before working for the Bears in 2015 as an offensive assistant.  He’s been coaching since college, having worked at Tennessee before going to Duke with former Vols offensive coordinator, David Cutcliffe.  He also coached at LSU and was also reportedly in the mix last offseason to potentially go back to take a job there, but he instead remained with Adam Gase.

Hardegree is also a former player and he’s been a winner.  He played quarterback for Tennessee and won a couple of Bowl games, winning the Cotton Bowl back in 2005 and the Outback Bowl in 2008.  He also won two SEC Eastern Division Championships in 2004 and 2007.

3) Zach Ertz remains a name that’s floating around, with some believing that the tight end may be looking for a trade of scenery.  With quarterback Carson Wentz also potentially on the trading block, ESPN’s Jeremy Fowler believes that Ertz could be packaged in with Wentz to give Philadelphia an attractive duo to send to whoever may be interested.

Fowler Tweeted over the weekend, “As the Carson Wentz trade saga continues, some people around the league also expect the Eagles to explore options with Zach Ertz, who is bracing for a change of scenery via release or trade, per source. Perhaps Philly could include him in a Wentz trade package to maximize value”.

Wentz’ name has also been tossed around here in New England and given their need at tight end, it’s a possibility worth keeping an eye on as the Patriots continue exploring their options.

4) Speaking of tight end, another name that came up over the weekend was Kenny Yeboah from Ole Miss.  According to Justin Melo of The Draft Network, the Patriots reportedly held a Zoom meeting with him recently, which will be something to watch heading into the draft.

New England selected both Dalton Keene and Devin Asiasi in last year’s draft, with both players each having a limited impact with the team in their first season.  Should New England seek another young player to add to that group, Yeboah is certainly an interesting prospect.  He caught 27 passes for 524-yards and 6 touchdowns last season, with the 6’4″ 247lb standout showing flashes last year that has him emerging as a solid addition who some analysts believe could potentially be taken in the 3rd round.

5) Former Dolphins executive Mike Tannenbaum was also on ESPN’s “Get Up!” on Monday and while he flirted with the possibility of Bill Belichick and Nick Caserio reaching a deal to bring Deshaun Watson to New England, he believes the more realistic scenario will involve the Patriots selecting Alabama’s Mac Jones in the upcoming draft.

The Patriots have already shown interest in Jones, having met with him during the week leading up to the Senior Bowl.

I agree that the Pats are in on Jones for a number of reasons. I also think that Jones has more interest from teams than pundits and fans know. NYJ taking Jones at #2, or ATL taking him at #4, would not be a shock, and I’m skeptical that BB would sacrifice the future draft picks (and/or players, like Gilmore for example) in a trade to go up that high. If Jones is gone by #4, all bets are off, and I’m guessing that the Pats might take Trask in the 2nd-round as Plan-B (I don’t see Trey Lance as being… Read more »