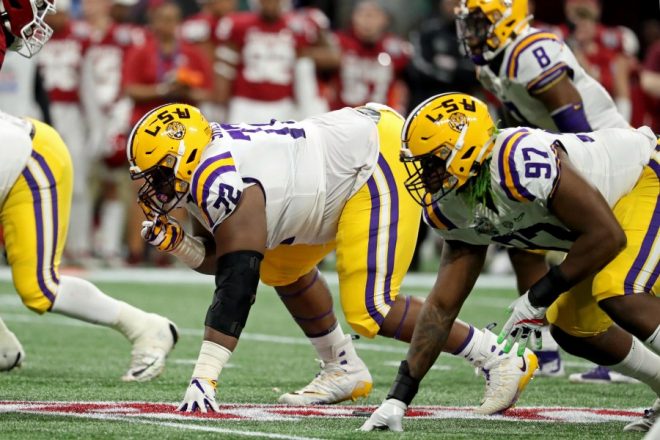 We touched on this earlier this week and I had already finished gathering information on this prospect. But when I posted my piece on the previous DL on a Patriots fan site on Facebook, a friend, Daniel McB. asked me specifically about this prospect. Without giving it away, I gave him a short response…here is, as Paul Harvey used to say, “the rest of the story.

Tyler Shelvin from LSU could be a much-needed depth Day 2 addition to the Patriots draft.

Shelvin is a massive, immovable force on the nose who is outstanding against the run but doesn’t offer much at all against the pass. But with the Patriots lacking a true nose tackle and questions still abound about the status of Beau Allen, Shelvin is in the mode of a Vince Wilfork, Ted Washington type of player.

Shelvin stands 6’3 and tips the scales at not-so-svelte 346 pounds. He was a 5-star recruit in 2017. He redshirted his freshman season and got into six games in 2018 garnering 1.5 sacks and 1.5 tackles for loss. In 2019, during LSU’s run to the national championship, he was dominant at the point of attack. He made 39 tackles, 3.0 tackles for loss, and 2 passes defensed. Like several other LSU players, he opted out of the 2020 college football season to prepare for the NFL Draft.

Shelvin is more than just a massive presence over the center. He also has great hands and can disengage blockers and will find the runner and finish. He plays with a non-stop motor and despite his lack of speed, goes all out on every snap.

Shelvin dominates single blocking and has the strong anchor to absorb double teams at the point of attack, allowing the linebackers to clean up and make plays.

– Physically massive, something needed for a nose tackle

– Can easily fill gaps and force runners into tackles

– Could work on getting off the snap a tad quicker

Shelvin will strictly be an early-down run stuffer

Yes, he could push Beau Allen for the starting job as early as 2021.

No one, the Patriots didn’t have a true nose tackle in 2020.

Conclusion:
NFL draft analyst Dane Brugler had Shelvin going in his Top 10 to the Raiders from a post in April last year. He was expecting Shelvin to return in 2020. But his comments are definitely worth mentioning.

“It was impossible not to notice Shelvin when studying LSU’s defense last season. He needs to show more impact as a pass rusher this season, but with his size and power, he dominates the point of attack and shuts down the run.”

“Shelvin is a nightmare for opponents in the middle of LSU’s front. He consistently anchors versus double-teams — or splits them — and he can control blockers,” McShay wrote before Shelvin opted out.

Shelvin was mentioned by his then-defensive coordinator Bo Pelini on 104.5 ESPN’s Hangin’ with Hester with some heady praise.

“Tyler Shelvin, I think he can be as good as he wants to be,” Pelini said. “I think he is a really talented kid. I am excited about him. He does some things, now. He is way bigger than Glenn was at this point in his career, but there are times you see that 72 and he reminds me of Dorsey – he’s just about 70 pounds bigger than Glenn was at that point. But we have guys that can play.”

Shelvin is another outstanding player with just one true season under his belt. However, because of his size, strength, and anchor, he was dominant at the point of attack in 2019. He constantly drew double and sometimes triple teams over the nose. Like any good nose tackle, his stat line won’t jump off the page, but rest assured he’s more than capable of handling the run-stuffing duties. I tend to disagree (respectfully) with the draft experts. Two down run stuffers rarely if ever go in Round 1. Shelvin is a late Round 2-3 prospect. But he’d be a much-needed run-stuffer in New England for several years.

A short clip by KATC 3 on Shelvin being ranked in ESPN’s top 32 prospects can be seen here: