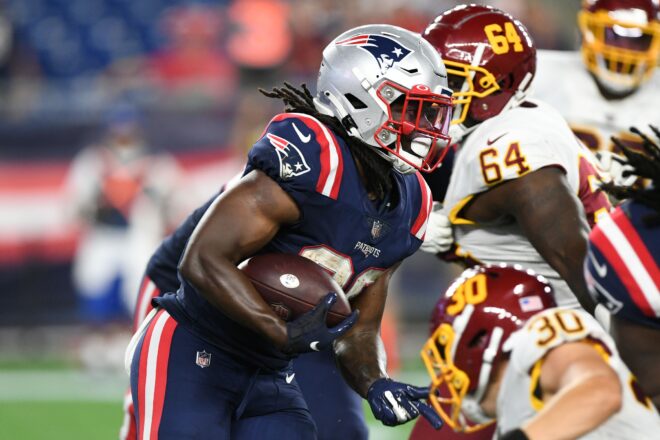 For the first time since January 2020, the New England Patriots hosted fans at Gillette Stadium for a football game as the 2021 preseason schedule opened up against the Washington Football Team Thursday night.

The matchup marked the professional debut of quarterback Mac Jones and the rest of the 2021 rookie class as head coach Bill Belichick begins spending the next few weeks narrowing down his final 53-man roster for the start of this upcoming season.

Take a look back at some of the best sights and sounds shared across social media from both the team and local media throughout the night below.

In this first quarter, Patriots fans saw the defensive strength of newly signed Matthew Judon on full display early on.

In the first quarter, both offenses couldn’t get much going, but a Quinn Nordin field goal gave the Patriots their first points of the year and a 3-0 lead.

.@MacJones_10 takes the field to a standing ovation in New England.

In the second quarter, Mac Jones took over under center and although he didn’t find the end zone, the potential in his arm and accuracy was noticeable.

Check out the placement of this football to Kristian Wilkerson.

My goodness. Mac Jones put this ball right on Kristian Wilkerson's hands (and only where the WR could catch it). 👀🔥 pic.twitter.com/odjmGeahQP

The Patriots again had to settle for a field goal, but the leg of Quinn Nordin turned some heads once again on this boot from 50 yards out.

Washington would score a touchdown just before the half to take a one point lead back to the locker room courtesy of running back Peyton Barber.

At the start of the third quarter, Mac Jones returned to the field and continued throwing darts.

Running back JJ Taylor also pulled off his best Dion Lewis impression on this run.

Another field goal gave the Patriots the lead back at 9-7 through three quarters of play.

In the fourth quarter, cornerback Joejuan Williams showed off his skills on defense as he looks to find a permanent role with the Patriots in year three with the team.

Williams made his first of two key plays in the second half on this pass attempt.

The Patriots converted the turnover into points and found the end zone for the first time all night to extend their lead to 15-7 thanks to rookie running back Rhamondre Stevenson.

Belichick SO mad Rivera calling timeouts at the end of Week 1 preseason 💀 pic.twitter.com/PlXa3mWOBo

With the clock winding down on the game, Washington and quarterback Steven Montez put together a productive drive that was capped off with a touchdown reception by Lamar Miller but they still needed a two-point conversion to tie.

Cornerback Joejuan Williams had other ideas.

Not sure how Joejuan Williams should've played this to prevent the TD.

Looks like he's expecting the high-point, so he can't react in time to the back shoulder. If he turns he completely takes himself out of the play pic.twitter.com/mYVwY3eA90

Following the defensive stand, the Patriots iced the victory while catching the Washington defense napping in the process.

There goes that man again, Rhamondre Stevenson rumbled down the field for a 91-yard touchdown to give the Patriots a 22-13 win to open up the preseason.

The Patriots will travel to Philadelphia to take on the Eagles next week.

The speed.
The noise.@CameronNewton in the back.

You love to see it ❤️ pic.twitter.com/qf7Z5umecf

"We've got to still keep working and keep fighting for the standard that we know."