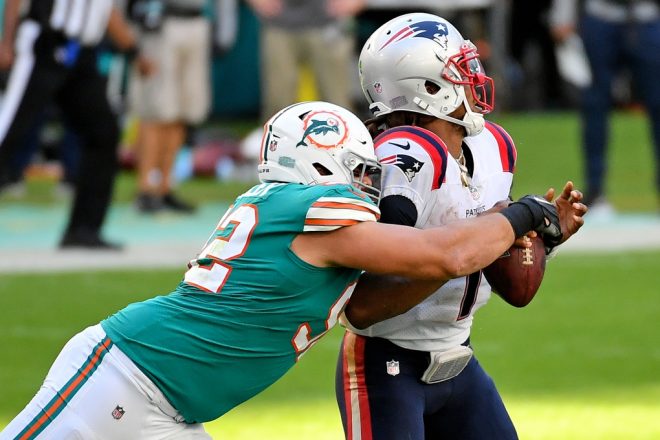 The Patriots entered Sunday’s game still mathematically alive for a playoff spot but the Dolphins for the second year in a row ruined their plans, for a bye week last year, and for making the playoffs at all this year.

For the second game in a row, they failed to find the end zone, the offense couldn’t seriously threaten the Miami defense. On the flip side, the run defense was absolutely trucked. Miami entered the game averaging 95 yards per game and rolled over the Patriots’ run defense for 250 yards, more than twice their season average, all with their best running back out.

Cam Newton mixed in good sequences with bad ones…in other words, more of the same of what we’ve seen all year. Newton completed 17-27 for 209 yards and a decent 7.7 yards per attempt. But no touchdowns, no interceptions, although Kyle Van Noy should have had one that was right to him.

His short passing game is scary bad to watch, while the medium to medium-long passes are (for the most part) much better. He uncorked a fastball at Devin Asiasi that was too high, ditto for N’Keal Harry. He badly overthrew an open Jakobi Meyers in the end zone. But hit Meyers on the deep slant that was arguably their best looking pass play on the day.

He ran pretty well, 9 carries for 38 yards but escaped disaster on a fumble recovery for a touchdown when the ball hit one Miami defender on the knee as he stepped out of bounds.

The running game was led by Sony Michel who gained 74 yards on just 10 carries. With Damien Harris out with an injury, Michel stepped in and looked better than he has in a very long time. He ran hard and physical, was carrying tacklers for extra yardage, made other defenders miss, and had a jump in his step that has been missing. Our only negative about Michel was that the coaches ignored him for quite a while in the middle of the game.

James White caught four passes for 52 yards, but whatever happened to the Patriots’ wheel route for White? Enquiring minds want to know. J.J. Taylor got involved a little bit but wasn’t a factor.

Jakobi Meyers had another strong game, with seven receptions for 111 yards. But he did have a fumble that really hurt the team, which was right after a Miami score. But he has been very good and was open with a step on the defender in the end zone.

Damiere Byrd and Harry didn’t factor much in the production (3-24, 1-12) but after watching the tape it wasn’t exactly their fault for what transpired… rewatch the tape.

With Ryan Izzo on IR, Dalton Keene has been the recipient for a lot of his snaps. Keene was targeted twice and had one catch for two yards, and then fumbled. Luckily, it was recovered on a heads-up play by James White.  But both he and fellow rookie Devin Asiasi who had the one target from Newton mentioned above, have added zip to the passing game.

In a chicken or the egg argument, is it them or the QB play?

The offensive line played a pretty good game, they opened up some holes in the running game where the team averaged 5.3 yards per rushing attempt and posted 117 yards on the ground. The opportunity for more was there.

The pass protection was okay, rookie Justin Herron filling in at left tackle was beaten on two straight plays with the first being a sack, however, but overall his game was passable. David Andrews left with a leg injury and James Ferentz filled in. The Patriots’ offensive woes had nothing to do with the play of the OL.

The defensive line was manhandled by an offensive line peppered with rookies. Miami coming into Sunday was 32nd (dead last) in the NFL averaging 3.6 yards per carry. And 27th in the league, averaging just 95 yards per game.

They completely owned the line of scrimmage and rode roughshod over the Pats defensive line and averaged 6.0 yards per rush and gained 250 yards on the ground, without their starter Myles Gaskin.

What makes this one even harder to fathom is that with DeVante Parker, Jakeem Grant, and Mike Gesicki out with injuries, the Patriots’ coaches had to know they were going to try to run the ball. And run they did. Their second-half touchdown drives were vastly tilted toward the run (8-9 plays on one, 8-11 on another). An ugly, ugly performance.

The Dolphins’ running game success wasn’t just on the defensive line. The linebackers were not doing a good job at all with setting the edge. Time after time, the backs bounced outside to wide open spaces with no one redirecting the plays back inside.

For all the fans lambasting Bill Belichick for not playing Chase Winovich more, rewatch the tape of this one. He was sucked inside on some plays and was sealed off on too many others. He, John Simon had a poor game setting the edge. Winovich did have a big hit on QB Tua Tagovailoa that led to J.C. Jackson’s easy interception. Josh Uche showed some speed and athleticism. Ja’Whaun Bentley left early with an injury.

Terez Hall had a mixed day, crashing down in run support on some plays, but was a liability in coverage. Missed tackles were everywhere.

The Patriots’ secondary was in zone early but switched back to man coverage. While Tua averaged just 5.6 yards per pass and threw for just 145 yards, it wasn’t as much on the secondary as it was because Miami’s running game was dominant.

The secondary was forced to and did a better job of setting the edge than the linebackers did. The team lost Stephon Gilmore to a season-ending injury that will require surgery on his quad, but at least it wasn’t a knee injury.

The bright spot on the team on Sunday. Nick Folk was 4-4 on field goals and hasn’t missed a FG attempt since the Seattle game.  Jake Bailey boomed a 56-yard punt but his 37-yarder was the beauty. He bounced it inside the five-yard line, where Matthew Slater made a fantastic play knocking the ball back to be downed at the 2-yard line.  Gunner Olszewski had just 16 yards on two punt returns, but we said earlier last week that Miami’s STs had very solid coverage. The Patriots coverage units were excellent.

The Patriots coaching staff had ten days to prepare for this one. And Josh McDaniels scripted plays were: an incomplete pass to Jakob Johnson, a loss of one yard on a Sony Michel run, and a screen pass to Damiere Byrd that went for -2 yards. That’s what ten days of prep got the team.

Steve and Bill Belichick couldn’t find a way to scheme up a way to stop the 32nd rushing team from gaining 250 yards on the ground. STs coach Cam Achord facing a very good Miami STs unit keeps the staff from getting another failing grade.

We’re on to… the division champs, the Buffalo Bills.