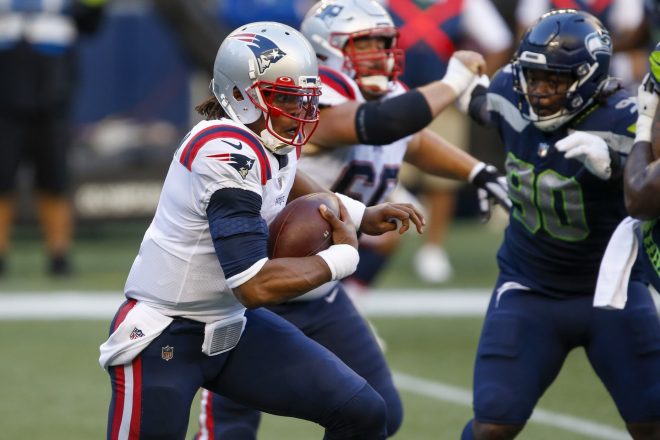 We wrote a week ago in our keys and have spoken on a couple of different podcasts about the skills that Russell Wilson brings to the table in the passing game for Seattle and how he has consistently given the Patriots fits. Sunday night was no exception, he was surgical in his slicing up an excellent secondary.

However, watching Cam Newton gain confidence in running the Patriots offense and the production he was getting has injected a ton of optimism in the fan base even in a loss.

So, let’s check out our grades and take one last look at the Seahawks before we move on to the Raiders of Las Vegas.

I really wish the NFL would release the All-22 a tad earlier instead of having to rely on just the broadcast video for our reviews…but we’re nitpicking here.

Cam Newton looked like the QB that the Patriots hoped they were getting when they signed him in June. There is no longer any question about his health, he’s been able to scramble and run from the pocket like the Cam of old. His shoulder looks just fine and he was firing the ball to his receivers with no worries about having enough zip on the ball.

He passed 44 times, completing 30 for 397 yards with a TD and an INT. While rushing for 47 of the Patriots 67 yards. But the most intriguing part of his performance was that once he and Josh McDaniels made their in-game adjustments, the offense by the 4th quarter looked nearly unstoppable. While it is still early in the season and with a very limited look at things, there is plenty for Newton to build on and it has been extremely positive.

The Patriots running backs were playing without James White as he was inactivated after his parents were involved in a horrible car crash that took the life of his father and put his mother in critical condition.

However, overall the backs didn’t produce much in the running game. The backs combined for only 20 yards on the ground. Sony Michel was held in check, and rookie J.J. Taylor had only one tackle. But Burkhead had a good day in the passing game catching four passes for 47 yards.

Jakob Johnson is making great progress and was singled out by Bill Belichick for some hefty praise. His blocking is much improved and he caught a one-yard TD from Newton.

Julian Edelman had a career-high 179 yards on eight catches including a beauty of a 49-yard deep strike from Newton. Despite dealing with a knee injury that had him listed as questionable, he was in vintage form and already has tremendous chemistry with his new QB. The only downside to his game was the last pass that zipped through his fingers in the endzone that could have won the game. But it was a tad high…

Everyone’s favorite whipping boy, N’Keal Harry had a very good game, catching eight passes for 72 yards and displaying great hands. His first catch on a slant resulted in a first down where he took a wicked shot on a helmet-to-helmet hit that resulted in Quandre Diggs getting ejected. Whether or not it was an ejectable case is debatable but Harry’s hands in that play were not. After using him mainly in the screen game, Newton targeted him twice in the final drive for 17 and 13 yards and his final catch put them in position to win the game with three seconds left.

Damiere Byrd had a very nice game, injecting some speed to the outside and hauled in six receptions for 72 yards. A big plus moving forward. Jakobi Meyers had a single catch for seven yards. Overall, 23 catches for 330 yards for this group. If we said they’d have this much production on Saturday, would you take that? Damn straight.

Ryan Izzo wasn’t part of the game plan, something we’d like to see he and Devin Asiasi become a bigger piece of in the near future. His blocking (as an extra tight end?) Michael Onwenu was good but he could only garner a pair of catches for 19 yards.

The offensive line play in pass protection was outstanding on Sunday night. Newton was sacked only once in 44 pass attempts. Rookie G Onwenu has looked good in the running game as an extra tight end and subbed in at right tackle for a spell.

But the run blocking wasn’t there on Sunday night, especially on that final play but give the Seahawks credit, they diagnosed it and had the perfect response called.

The defensive line and the front seven had the type of game that brought home the lack of depth they have missing so many of their starters from a year ago. While they were able to bring very good pressure on Russell Wilson for much of the game, containing him, as it is for 31 teams is never easy. But they were gashed in the running game. It seemed like the plan was to allow the Seahawks some leeway in the running game while limiting their passing game…it didn’t work

The Patriots went with more defensive backs than LBs in this one in the aforementioned attempt to limit Wilson in the passing game. But they weren’t able to slow the run at all, and were gashed badly to the tune of 154 yards on 30 attempts for a 5.1-yard average. That won’t get it done. The backs also were a source of frustration out of the backfield.

Ja’Whaun Bentley had a rough night, as his lack of lateral speed was exposed in this one. However, the coaches can’t use him as a spy on Wilson, that was an obvious mismatch and Wilson roasted them for a 21-yard scramble.

The Patriots secondary had a very rough outing, one of their worst in recent memory. Wilson was an equal opportunity torturer, he took all of the defensive backs to task, having almost as many touchdown passes (5) as incompletions (7).

The pick-six by Devin McCourty was gift-wrapped, as it bounced straight off Greg Olsen’s hands and right into his.

Aware of Wilson’s scrambling ability, they tried playing zone at first, (big mistake) as he gashed them. But even in man coverage, the results weren’t much better. He picked them apart all night long. However, on a couple of his deep balls, the secondary was in perfect position but Wilson placed the ball where only his receiver could get it.

In our keys to the game, I summed up the matchup with two words….Russell Wilson. They had to bring their “A-game” in the secondary. Wilson brought his; they did not. They need to regroup this week and get ready for the Raiders.

The Special Teams kicking game remains a glaring weakness. Nick Folk shanked a 51-yard field goal that could have had ramifications late in the game. It needs to be fixed…and soon. Jake Bailey and the coverage units were superb as always.

The return game got its first action in and did okay.

The Patriots coaching staff mixed reviews here, their game plan to stop Wilson and the Seattle offense failed…obviously. But the offensive game plan and the adjustments they made in-game were very good. They’ll learn from it, they’ll see what works, what didn’t, and move on. This is a staple of the Belichick coached teams.

One final note on the last play of the game. Prior to that (and it was a great play by the Seattle defense, which has been overlooked in all this), how many times did Newton get stopped running that type of play? During the game whenever McDaniels tried to switch that up Twitter was filled with “McDaniels is getting too cute” and such. And many of the same people were calling him out for not calling a pass there.

Flashback to the Super Bowl and Pete Carroll …not running Beast Mode from the one-yard line. Hmm. It was the right call, and 99 times out of 100, Newton will get that yard. The only time we hear play calling questioned is when it doesn’t work.

We’re on to Las Vegas (wait…what?) and the Raiders this week.