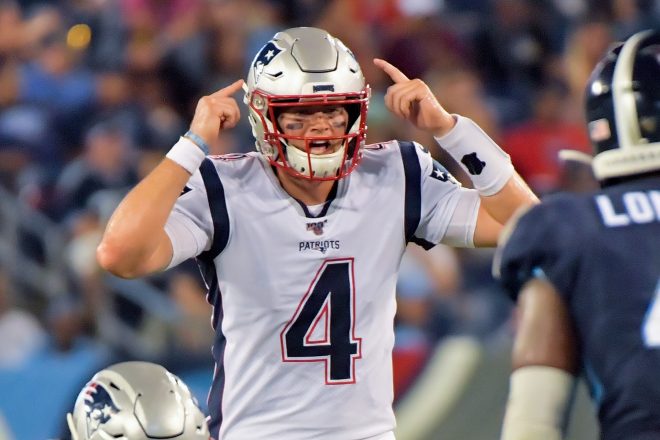 The roster stands at 89 players as of this writing.  Let’s do some analysis of the team, coaches and the approach they might take.

I think this team will be a work in progress, evolving each week, not just to meet the challenges imposed by each opponent, but to the Patriots personnel growth and or failure to meet expectations.  As with most Bill Belichick teams, get them early in the schedule.  Once they have had the chance to gel, they will be much tougher.  The schedule is the toughest schedule in the league, so there will be no beating up on the little sisters of the poor this year.  Having Seattle and KC on the road the 1st month can be a real learning experience for the team.  I expect many new and younger faces on the team.

QB – It all starts with the QB position.  Jarrett Stidham vs the ghost of Tom Brady.  Many people point to the successful pre-season Stidham had last year.  Lets put it into perspective.  He was playing against 3rd stringers and guys that never made it to the show.  What was encouraging is that Stidham made the throws, completions behind a sub par O line.  He threw to Jakobi Myers, who caught nearly everything thrown to him.  He had no TE’s.

What to expect?  I think Stidham will be a much better passer than Brady was last year.  Lets face it, Brady was very inaccurate last year.  He would not throw to the rookies.  Granted the offensive line was in shambles last year (more on that later).  What you won’t have is the pre-play recognition that Brady had from years of experience.  Stidham will likely be goaded into mistakes, like the pick he threw in his only play against real NFL defenders.  I think Stidham will have that quick release Brady had, not sure if he will have that pocket presence that comes with experience.   I don’t think they will ask Stidham to do too much especially early in the season.  Don’t underestimate the hiring of Jedd Fisch as QB coach.  He is here to groom Stidham.

RB – The team has an above average group of Running Backs.  With the O-Line improved, and an inexperienced QB, new and improved blocking TE’s, and a new fullback, I see this offense running the ball more.  Take the pressure off the kid, eat the clock, keep the defense off the field.  I was not impressed with Sony Michel last year.  Was that the ineffectiveness of the Oline?  It could have been some of the problem, but I just didn’t like the way Michel ran, picked his holes and followed his blockers.  He also didn’t display any break-away speed that I would expect from a number 1 pick.  The difference between when James Develin was in the game and not was remarkable.

Rex Burkhead provides a nice change of pace.  Burkhead can catch the ball too, which makes it difficult on the opposition.  Burkhead also can contribute on special teams.  James White is the best in the league at catching the ball out of the backfield.  This may be White’s last year with the Pats.  He and Burkhead are Free Agents next year and the Patriots don’t pay for running backs.  Brandon Bolden has had a wonderful 8 year career in the NFL, mostly as a special teams player.  We know how much love BB has for Special Teams.  Bolden has become an effective runner too in limited carries.  Damien Harris is a high draft pick from last year and was inactive for most of the games.  Bolden is 30, Burkhead and White and all three are free agents next year. 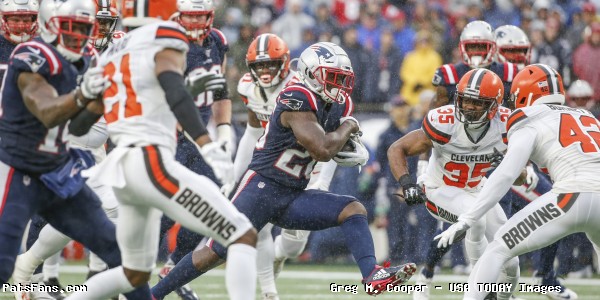 Michel needs a stronger performance in 2020.

FB – Dan Vitale was signed from Green Bay.  He was called the “Superback” at Northwestern, playing RB, FB, TE and Slot receiver.  Vitale had 33 catches his senior season at Northwestern.  Although not the size of Develin, he certainly won’t back down from contact.   International designee, Jakob Johnson is back for another try but I think with Vitale and Keene, his chances of making the team are slim without an injury occurring.  Remember what I said about Michel running with a FB vs not.  It’s different as night and day.

O Line – This is an area where we will see big improvement this season.  Isaiah Wynn finally was healthy enough to get some significant playing time at Left Tackle and he looked good.  He was excellent at pass blocking and is improving in the run game.  Joe Thuney is on the verge of becoming a perennial All Pro.  He is very durable and very good in pass protection.  The return of David Andrews is a big plus.  Although undersized, Andrews is good in making the calls and pass protecting.  However, he can get overpowered at the point of attack by stronger NT.

Shaq Mason is a very nimble run blocker and when pulling on traps, very effective downfield and on sweeps.  He sometimes gets overpowered on bull rushes, but his pass blocking has greatly improved.  RT should be interesting competition.  Marcus Cannon is turning 32 and has been injury prone the last few seasons.  Mike Reiss reported Tuesday that Yodny Cajuste is fully recovered and ready to challenge Cannon for the starting job.

Last year was a red-shirt year for Cajuste, who the Patriots knew was hurt when they drafted him.  That is why he fell to them in the 3rd round.  He was a three year starter with 30 starts at West Virginia.  Backup spots will have plenty of competition.  Last season draft pick Hjalte Froholdt and this years 4th round selection Michael Owenu will battle it out.  Draft picks Dustin Woodard at Center and Justin Herron as a swing tackle round out the line.   Whoever among these 4 that makes it to the Practice Squad can be called up for game day roster expansion, then immediately sent back to the PS after the game.  With the new TEs and Dan Vitale at FB I see the return to a dominating Ground Game, especially to take pressure of the young QB.  Put him in manageable down and distance.

TE – you don’t trade up as the Patriots did twice to nab Devin Asiasi and Dalton Keene, just to sit them on the bench.  This duo is comparable to the double dip the Pats made in selecting former Patriots Rob Gronkowski and the late Aaron Hernandez.  Keene has been favorably compared to George Kittle.    His versatility and run after the catch are going to make him a fan favorite.   Josh McDaniels will have a field day with the ways they can utilize Keene.  Keene is known to finish his blocks and plays right the whistle.  His nickname is Rambo.   Asiasi was a good blocker in college, let’s see how that translates into the Pros and the best blocker in the draft.

WR – N’Keal Harry has been working on his footwork.  He is very good at contested catches and usually come down with the ball.  Let’s hope he is better at getting off the line and running the entire route tree.  Mohammed Sanu played on a very bad high ankle sprain.  That limited his production.  I expect much more from him.  Sanu is still in a walking boot from surgery he had in March.  This bears watching, especially since he might be a cap casualty come June 1st.

Picking up Marquise Lee at a bargain basement price is a no-brainer.  Lee has had a couple of injury filled years.  He has the opportunity to prove himself.  It will be interesting what role Julian Edelman will have.  He has had a high number of dropped passes the last couple of seasons.  I don’t think he will have as heavy a workload as he has had the last few years with Brady.  Edelman’s blocking is vastly underrated.

Jakobi Myers had a steady rookie season.  He did not have the confidence of Brady.  He does have Stidham’s.  He was his favorite target in the pre-season last year.  Look for one of the three UDFA slot candidates to make the team either as a 53 roster member or practice squad.  I like Will Hastings.  He was a teammate of Stidham’s at Auburn and they clicked.  Hastings is a Groomsman for Stidham’s wedding.  He has lightning quick 3-cone time of 6.55 and a 40 time of 4.51.  This despite have two ACL surgeries.  Michael Thomas and  Sean Riley are the other two slot receivers.  Both have return skills as well.

“I think Stidham will be a much better passer than Brady was last year.”
That’s one hell of any expectation to be placed on this rookie. I don’t believe he’ll come close to Brady’s stats last year, no matter how bad they were. Give the kid a chance to acclimate to the NFL. If the Pats go 6-10 this year, I won’t be surprised, just disappointed.

I think you mean Jeff Thomas, not Michael