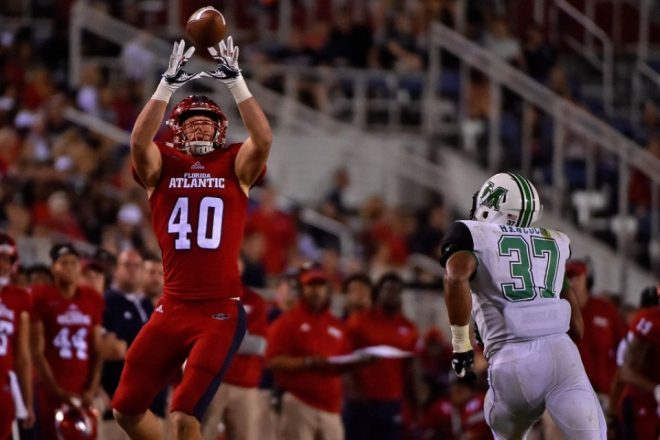 We’ve taken a look at a couple of linebackers, a safety, the defensive line but today we’ll look at the thinnest position on the team, and the one where the dire need of a pass-catching option was missed all of 2019, tight end.

The Patriots since 2010 had made the tight end position a huge part of their offense and that was because Rob Gronkowski was such a weapon in both the running and passing games for the decade. He could attack the defense on all three levels and he opened up things for the wide receivers with the amount of the field that he would draw attention from. His retirement last year left a gaping hole in the offense that was never filled.

As of today, the Patriots have Matt LaCosse, Ryan Izzo and fullback/H-back James Devlin, Dan Vitale, and Jakob Johnson. There isn’t anyone who can stretch the seams and not a reliable red-zone threat. They need probably two tight ends in this upcoming draft.

So, let’s take a look at another one of the prospects that we feel would be a good fit for the Patriots. While most people really like the top two tight ends in what is a thin draft for the position with Cole Kmet, and Adam Trautman, neither of those two may not be there. Would they use a 1st round pick on Kmet? And would Trautman still be there at #87 if they stand pat and don’t trade for another pick?

One player who should be there at #87 (good number to draft a TE) is Harrison Bryant from Florida Atlantic. Bryant had tremendous production with 65 catches, 1004 yards, and 7 touchdowns. Bryant won the John Mackey Award in 2019 as the top tight end in the country.

He has the large frame and catch radius that will be a QB’s best friend at the next level. He was frequently used as a deep threat in FAU’s offense, where his size and speed made life tough for opposing safeties and LBs. Finished his college career with 148 catches, 2137 yards and 16 TDs.

– Excellent production, led the nation with 65 catches at TE

– Good route runner, explodes out of his breaks

– Can threaten the deep seams of the field

-Will have the occasional concentration drop

– Needs to use his body a bit better, shielding the ball from opponents

Bryant will immediately challenge for the starting reps as the pass-catching option at tight end.

Yes, in Year 2 by then, with another 10 pounds on his frame which he should easily be able to put on without losing athleticism, he could become a focal part of the offense

He’d immediately push LaCosse for a roster spot. Izzo is more of a blocker so if it comes down to production, he’ll be their guy.

NFL.com’s Lance Zierlein compares Bryant’s potential to that of George Kittle, and wrote this, “He’s instinctive in space with speed and separation talent to work all three levels and gives offensive coordinators the freedom to line him up all over the field. Bryant could become an early starter and has the talent to be a high volume pass-catching target as a move tight end.”

Bryant is a very intriguing prospect who may be available in the middle rounds. He has tremendous production, the length and catch radius that will make him a valuable safety blanket for any QB. He has very sticky hands and the speed and athleticism to be a weapon in all three parts of the field.

He’s very competitive and is improving as a route runner, using good explosion out of his breaks to get separation. While he is a willing and tenacious blocker, he needs help in that regard and an extra 10 pounds of muscle won’t affect his athleticism or speed.

With the Patriots in need of a pass-catching tight end that can threaten the seams and the deep parts of the field if singled up on a linebacker or safety, Bryant could very well be that guy. And if they find him in Round 3, he’d be a great target. He would immediately become Jarrett Stidham’s safety blanket.

Bryant’s highlight reel tape from Stadium can be seen here: