Football is back! The Patriots took to the field for the first time in pads in 2017 (albeit in shorts and shells) for their first training camp practice of 2017.

Temps were cooler than expected and the sky was overcast. The crowd was huge and raucous, any activity at all by Tom Brady or Rob Gronkowski was immediate grounds for a huge cheer as the fans are excited to see the Super Bowl champs back on the field. 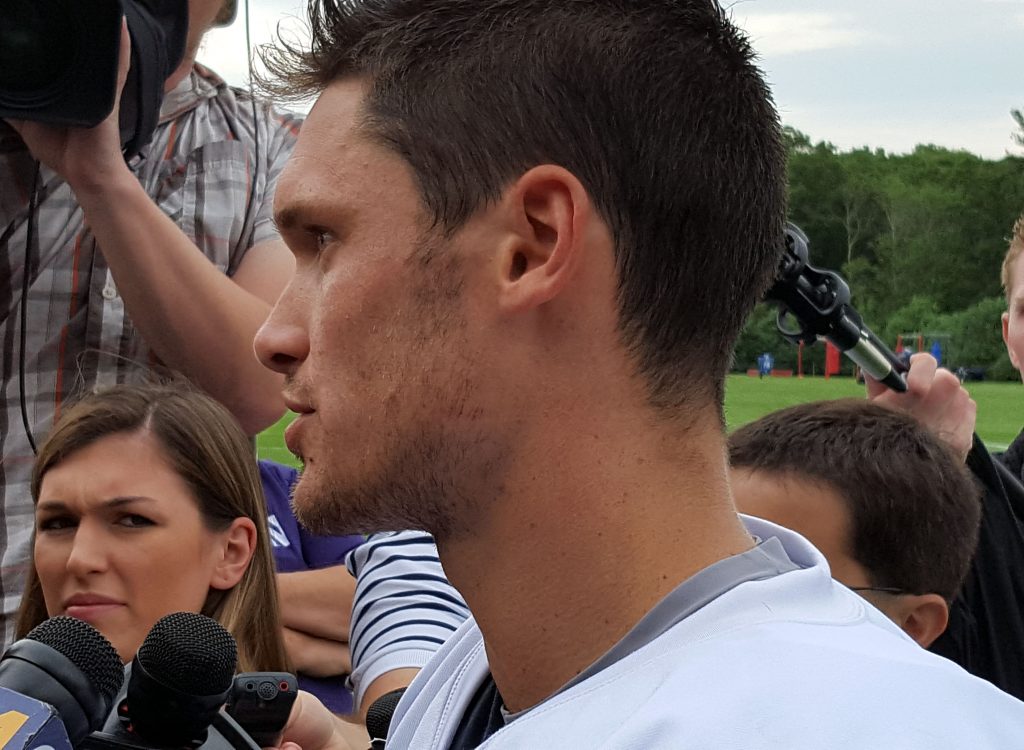 Speaking of Gronkowski, the big man looks as healthy as can be, he was moving very well all over the field and before practice, Bill Belichick was asked about Gronkowski’s health and if he was going to a be a full-go at practice. Belichick responded that those questions were answered in the spring and Gronkowski had no limitations on his practicing.

Team Healthy: Another very good sign, health-wise was concerning Dion Lewis. Now about 18 months removed from his surgery for a torn ACL, Lewis looked like the lightning-quick back with excellent cuts that we’ve become accustomed to. The Patriots called his number frequently out of the backfield and he passed the first test. The only concern with him or Gronkowski for that matter would be if their injuries acted up after a full day of practice. One notable absence was Rob Ninkovich.

The intensity level was toned down with just shorts and shells, so there wasn’t the hitting that one would be expecting on the first day of camp. So it was kind of like an intense version of mini-camp as the hitting was toned down a bit.

Brady – Jimmy G. Split Reps: Interesting to note, that although Tom Brady took all the “first team” reps (since BB hates to use that term in training camp), he and Jimmy G. split reps pretty evenly. Normally Brady takes a lion’s share of the reps with Garoppolo and Jacoby Brissett to get what they can.

Brady looked sharp and on target, he overthrew Brandin Cooks on one deep throw in drills, but looked in control and in near mid-season form. Garoppolo had a mixed day, he gets the ball out quickly and for the most part was pretty accurate with his throws, he threw a dart to Chris Hogan in the back corner of the end zone with Justin Coleman in coverage. And then did the same thing on a nice grab by Cody Hollister. But he had some bad misses too…First day of camp norms.

Brissett still holds the ball too long. Time after time during drills, he wasn’t making the reads quick enough and wouldn’t even make a throw. His accuracy was better but still needs work. He has an incredibly strong arm and can make all the throws, but needs to work on his consistency. He got a lot of work today as well. His best play was a nice throw and grab at the back of the end to Devin Lucien during 11s. 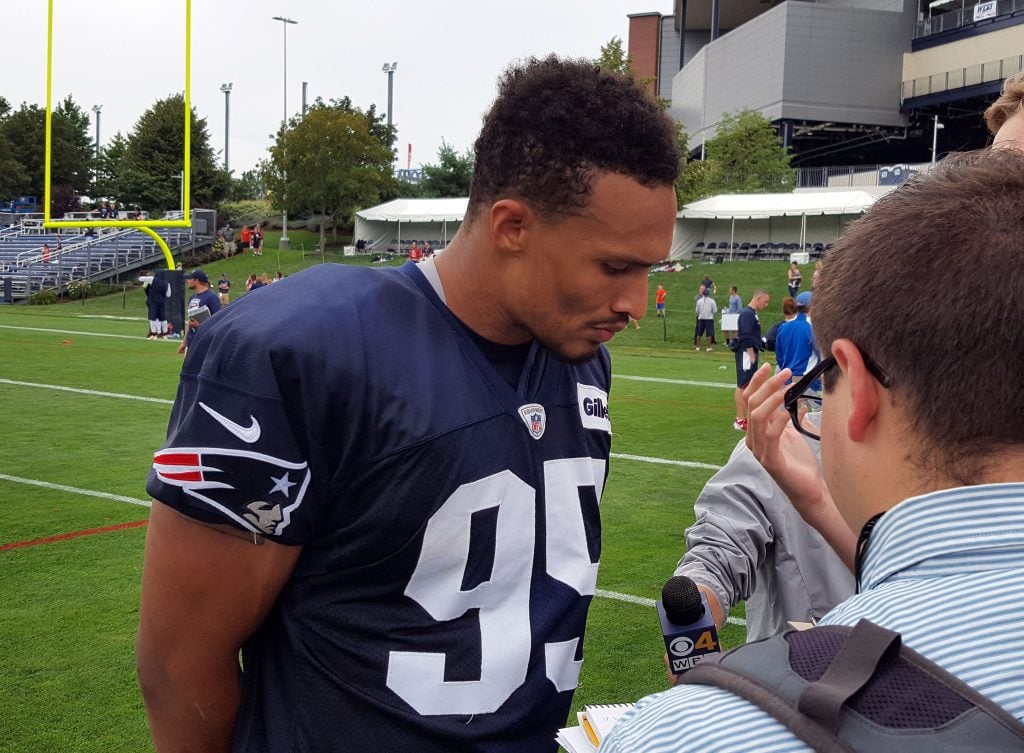 Dion Lewis and Cyrus Jones took most of the first reps with the return units, Danny Amendola also took some reps. Both Jones and Lewis looked good with good speed heading down the lane and each fielded the ball cleanly. Tony Garcia got some one-on-one work with STs coach Joe Judge working on the punt return unit along with Ted Karras.

Other observations: This Patriots offense looks like it is going to be tough to stop. Spreading the field wide they can work underneath with Cooks and Edelman and the cushion they create is going to make it easy to move the chains. They can also flex Lewis or Burkhead out of the backfield, forcing the defense to cover with a linebacker and when they do this, the mismatches they force will be easily identified. 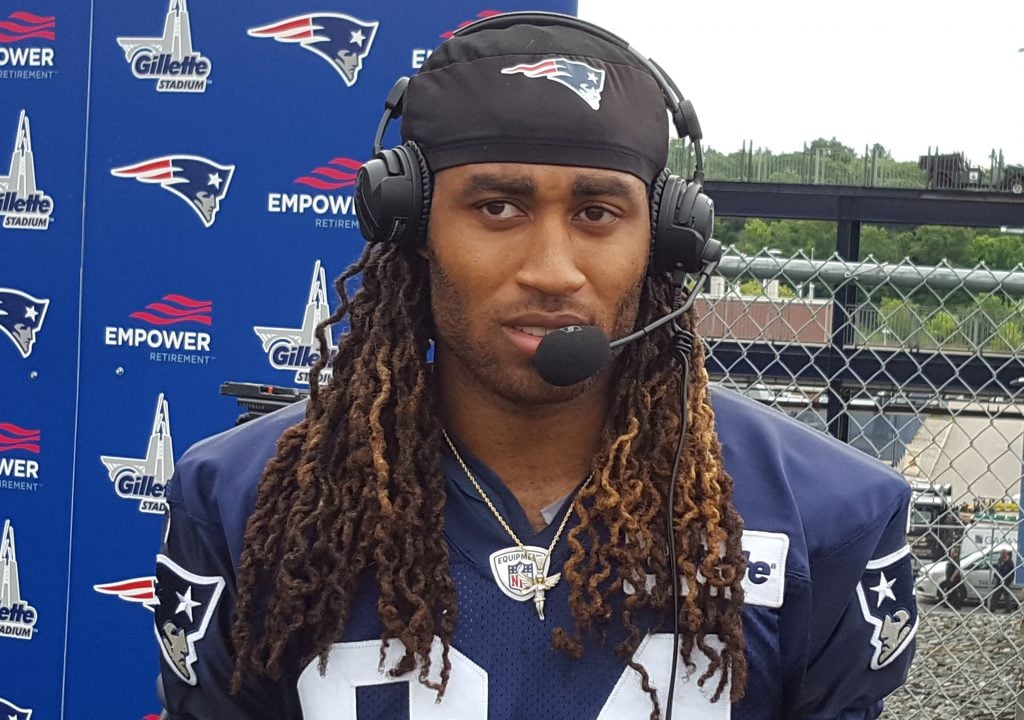 The running game had a quiet day as the team was just in shells so I wouldn’t read much into that. Austin Carr had a nice morning, he was moving around well with the backups, working with Brissett and speaking with him afterward, he seems like a very well grounded young player.

Check back with PatsFans.com later and we’ll have some video interviews.

By: Ian Logue
Patriots quarterback Mac Jones was back at practice again on Wednesday, which doesn't make much sense given the severity of the high ankle sprain he…
14 hours ago