4 years ago at 9:28 am ET
Follow @IanLogue
Posted Under: Uncategorized 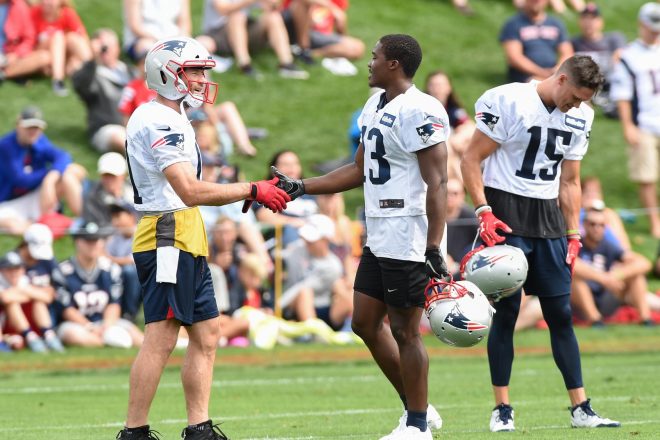 A short edition this morning with tonight’s game against Washington now finally upon us.

Quiet Practice to Close Things Out Before Tonight – Wednesday’s practice was closed to the public and according to reports, it sounds like the team spent most of their time putting the finishing touches on their plans for tonight’s game against the Redskins.

They held some 11-of-11s and by all accounts it looked like players were essentially going through the personnel groupings that will come into play when the team takes the field before a downpour eventually ended the session about 30 minutes early.  With a roster of 90 players, that’s always been one of the more interesting parts of the game in terms of guys being on the field when they’re supposed to.

The other obvious thing is the fact that having the opportunity to see players perform in competitive situations is the only real way to get a sense of what they can do.  Granted, it always depends on the level of competition they’re facing but on the other hand, all they can do is try and excel when the opportunity arises with whoever they’re lining up against.

Bill Belichick said on Tuesday that the valuable part of these preseason games is the fact it’s a chance to really evaluate these players in competitive situations.

“I’m sure it will be valuable,” said Belichick.  “Yeah. We’ve talked about those things, but actually doing them in game, in competitive situations, it’s a little bit different. We saw the Hall of Fame game. A couple situations came up in that game that are good learning experiences for our team, and we’ll use those as teaching tools, and then we’ll experience it Thursday night and I’m sure we’ll learn something there and in succeeding games.”

With the spotlight on so many young players, it’s easy to get caught up in the moment and overthink things and that’s something that Devin McCourty told reporters Wednesday that the younger guys need to forget about Thursday night, instead focusing on just playing football.

“I always try to tell guys don’t get caught up in so much coaching and everything that you kind of leave the game and feel like, ‘Man, I didn’t even like play like I’m used to playing.’ And I think that’s very important,” said McCourty.  “You know, if you’re here, you’re usually here for a reason because you’ve played good football before. Once you get out in these games, you want to showcase your talent – showcase, obviously, the coaching that you’ve been getting, but showcase the work you’ve put in all through your life to get to this point.”

As always, it should be interesting to see how it pans out and it’s safe to say it will be good to see football finally back in Foxboro again tonight.

Bengals Fans Remain Bitter With Hill – In a region where they tolerate enabling and mediocrity, it appears fans in Cincinnati are still a little bitter with Patriots running back Jeremy Hill.

Hill, who fumbled during the 2015 match-up between Cincinnati and Pittsburgh with just over a minute to go following a turnover by the Steelers, remains in their cross-hairs.  A writer for USA Today’s Bengal Wire spotted Kevin Duffy’s Tweet about the running back’ fumble on Wednesday that saw Hill run a lap with his new team and clearly it remains a sore spot for Bengals fans who watched their team squander the chance to win a playoff game.

Oddly enough, they don’t seem to recall that despite the turnover, the Bengals still could have won the game.  They clearly forgot about the fact that Vontaze Burfict’s stupid Unnecessary Roughness penalty, coupled with Adam Jones’ Unsportsmanlike Conduct penalty, took the Steelers from the Bengals’ 47-yard line with 22-seconds to go in that game and put them at the Bengals’ 17, setting up Pittsburgh’s 35-yard field goal that ended their season and extended their playoff losing streak to 0-7.

“He’s trying to go over and defend the play,” Lewis told reporters. “There’s a lot of balls out there, plays today, calls went different ways. … [The officials] deemed that to be a hit to the head, and others not today.”

Burfict is still with the team and his attitude hasn’t changed, so as they say, “you reap what you sow”.  Funny how the focus always seems to be on the wrong thing out there but when you even have the head coach feeding into the insanity, it’s not a surprise.  The team should have gotten Burfict under control years ago but Lewis’ inability to lead remains their downfall.

Needless to say, Hill’s fumble was the least of their problems and unfortunately, the fact he’s in New England certainly won’t change that.

Odds and Ends – Some numbers, facts and useless stats for tonight’s game: