3 years ago at 7:22 am ET
Follow @bob_george
Posted Under: Patriots News 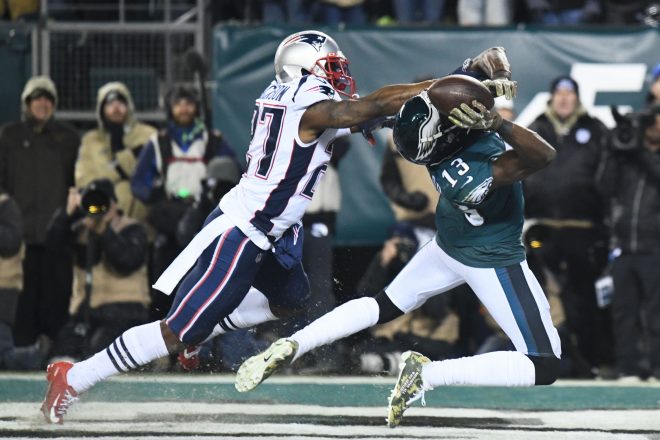 PHILADELPHIA – It was everything that Super Bowl LII wasn’t.

The Patriots used three field goals, a gadget play touchdown, a two-point conversion, and a defense which finally cracked the Eagles’ code to defeat Philadelphia, 17-10 on Sunday at Lincoln Financial Field. The Patriots held on to the one seed in the AFC as Baltimore continues to steamroll over opponents.

The game morphed into a defensive stalemate once the Patriots took a 17-10 lead in the third quarter. At one point, Philadelphia punted on six consecutive possessions. The Eagles bludgeoned the Patriots with a 95-yard touchdown drive in the first and second quarters, and did nothing after that. The Patriots finally put the clamps on the Eagles’ offense, something they were not able to do in the Big Game. Carson Wentz, who was not the quarterback in the Big Game, was sacked five times and finished with a passer rating of only 74.4.

The Eagles came to play on defense also. Tom Brady’s passer rating was actually lower at 67.3. The Patriots’ only touchdown was on a pass thrown by Julian Edelman. The Patriots had three straight red area drives in the second quarter, and all of them ended in Nick Folk field goals. The Patriots once again were impotent in the running game, with only 74 total yards and a 3.4 average per carry.

This game won’t go down as high on your re-watchability list. It was an aggravating game, a tough game, but a game the Patriots did ultimately win. Offensively, the Patriots were basically stuck in neutral for most of the game. But the defense held firm and never allowed Philadelphia to regain whatever offensive mojo they had in the Big Game. Call it sweet revenge if you must, but a win is a win, and the Patriots will take it.

The one Patriot touchdown came on a gadget play they have run several times over the years. On third down and 11 at the Eagles’ 15 on the opening drive of the second half, Brady threw a backwards pass to Edelman in the right flat. You could hear Patriot Nation screaming “Double pass!” in unison worldwide. Edelman threw a laser into the end zone and hit a wide-open Philip Dorsett to give the Patriots their first lead of the night at 15-10. James White ran in a two-point conversion, and that was it for the scoring. Edelman’s strike to Dorsett was arguably the best throw of the night by a Patriot passer, as Brady was harassed a lot during the game (but was sacked only once).

The Eagles jumped out to a quick 10-0 lead. On the first play of the game, Wentz tried to hit Boston Scott on a deep left sideline route, but Jason McCourty was called for interference and the Eagles got 49 yards on the play. Three plays later, Jake Elliott hit a 42-yard field goal to make it 3-0 Eagles. The wind was a factor in the game, blowing right to left all game long. All four field goals in the game were kicked to the left, with the wind.

After an exchange of punts, Jake Bailey (who could be the number one star of the game for the Patriots) pinned the Eagles at their own 5. Seemingly out of nowhere, mostly thanks to 4 and 5-yard gains, the Eagles found themselves at the Patriots’ 8-yard line, now into the second quarter. On third and goal at the 5, Wentz hit tight end Dallas Goedert on a slant pattern in the end zone. Jonathan Jones was able to wrestle the ball away from Goedert, and the play was ruled an interception and a touchback. However, replay showed that when Goedert’s knee went down, Jones hadn’t yet stripped the ball away. CBS’s officiating expert, Gene Steratore (he is also their basketball officiating expert) said very clearly that once his knee hit, play is over, touchdown Philly. Referee Bill Vinovich concurred. The Patriots had just surrendered a 95-yard touchdown drive.

From this point, this game was all Patriots, a testimonial to the makeup of this team. Another team might have mailed it in, especially given the fact that two weeks ago the Patriots were smacked around by the Ravens and the team was coming off a bye week.

But the defense finally held firm, pressured Wentz and got him out of a rhythm, and put the clamps on Miles Sanders and the rest of the Eagle running attack. The next four Patriot drives ended in scores (save for the final drive of the first half, a kneeldown), three field goals and the double pass touchdown.

One of the Eagle drives ended in a strip sack. With Philadelphia leading 10-6 in the second quarter, on second and six from their own 32, Wentz was strip-sacked at the 22 by Danny Shelton. Lawrence Guy fell on the loose ball. But the Eagles’ defense only surrendered one yard, and Folk hit his third field goal from 39 yards out to make it 10-9.

The Patriots come back home next week to take on the Dallas Cowboys, another NFC East opponent. They will see Dak Prescott and Ezekiel Elliott for the first time. They will get left tackle Isaiah Wynn back, which should help the offense greatly. After losing the first seven games in this series, the Patriots have won the last five. The Patriots haven’t lost to the Cowboys since 1996. The Patriots and Cowboys have the two most high profile owners in Bob Kraft and Jerry Jones, as well as the two most well-known football brands in the business. But this is a game the Patriots must win, and you can keep saying that as long as the Ravens remain a game behind the Super Bowl champs.

Brady and the Patriots are still furious over losing Super Bowl LII. The win today gained some measure of revenge, but the Eagles still wear the crown from 2017. Take the win, move on, and win the Big Game again this year.

READ NEXT:
5 Thoughts Following the Patriots Win Over the Eagles
Posted Under: Patriots News