3 years ago at 7:00 am ET
Follow @SteveB7SFG
Posted Under: Patriots Commentary 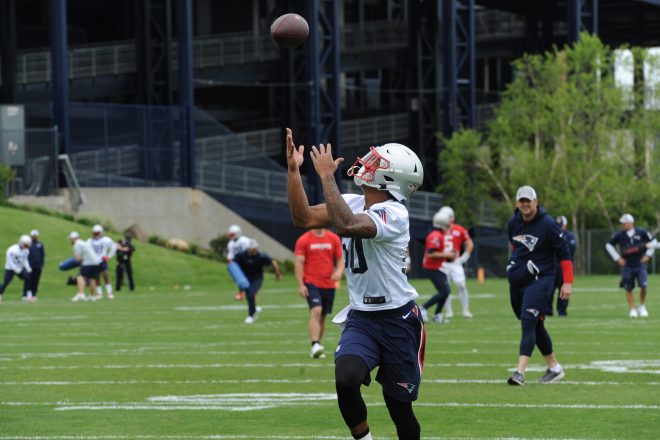 The Patriots only held one practice during the bye week, on Wednesday, and then the players were given some needed time off to rest and recuperate. If you bet that after the loss to the Ravens on Sunday night that the coaches would keep them here all week in pads, you’d have been wrong.

This is telling in that it says that the issues facing the team aren’t physical and Bill Belichick doesn’t feel that they need to practice doing things that they aren’t doing well so that practice makes perfect. No, this means that the coaches have done, and are still doing no doubt a healthy dose of self-scouting. The issues that the team is facing are more scheme-related than physical. Which includes the defense, and we’ll get to those.

But first, let’s take a quick look at what we feel are two of the biggest issues facing the team after deciphering the first nine games of game film have been watched, watched again and analyzed.

The Team Needs to Fix Their Red Zone Production:

Despite being one of the top-scoring teams (1st in points, 2nd in Points per Game) in the NFL, the Patriots have not been anywhere near as efficient as they have in years past. In fact, in the red zone, the Patriots currently rank 21st in red-zone production tied with the (gasp!) New York Jets at 50 percent. That is down from 62.18 percent from a year ago.

Part of the reason they have struggled in the red zone is three-fold. They have struggled to run the football. Their tight end production is way down, and so is the production from their outside or “X” wide receiver.  Missing their left tackle, center, fullback James Develin and having both starting tight ends being dinged up for most of this season doesn’t help with the running game.

Not that anyone really expected Matt LaCosse and Ryan Izzo to block as much as well as Rob Gronkowski and Dwayne Allen did a year ago. Having these issues compounds the entire picture. While some will point to Sony Michel as being the issue, that is too simplistic and ignores the fact that there is often nowhere to run and he’s getting hit in the backfield.

Gronkowski was a tremendous red-zone threat in the passing game. Izzo and LaCosse? Not so much. Missing Gronkowski in the passing game was known to be a given. But their lack of production in the red area combined by their big “X” WR and TE are both show stoppers. Much more was expected out of both positions. LaCosse has three catches for 55 yards on the season and has been hurt more than anyone on the offense. Izzo, a blocking specialist, has six catches for 114 yards and a score. Ben Watson has played in the last three games and has 8 catches for 72. Put together, the tight end production is not going to cut it.

Josh Gordon was placed on IR and then released, being picked up by the Seahawks. But in six games, he only had 20 receptions for 287 yards and just one touchdown this season. Added together, it is a weakness that opponents have taken advantage of and needs fixing.

The problems along the offensive line have been well documented at this point and the lion’s share of the blame has been heaped on backup left tackle Marshall Newhouse. Is it correct? Look he hasn’t been great, but putting all of the blame on him is unfair and untrue. Neither Shaq Mason nor Marcus Cannon has played anything close to their level that we’ve come to expect. Although Cannon was better on Sunday night against the Ravens.

Getting Isaiah Wynn back against Dallas will certainly help but will be no panacea for the OL as a whole. Wynn should immediately help in the running game and we’ll have to see how well he holds up in the passing game. But the offensive line as a whole needs to get healthy and perform better. Wynn will help. But Newhouse has been the convenient whipping boy but in truth, it is the group that needs to improve overall.

At tight end, Watson will continue to see more targets as he finds a comfort level in the offense and his timing gets better with Tom Brady. What the team really needs is for either Izzo or LaCosse to step up, preferably both. But at this point, they are what they are and I’d be surprised if they got anything different than what they’ve gotten up to this point.

They’re going to have to live with what they have for the rest of this season. Watson, although 38-years old, is much more viable than the others in the passing game. The fades and crosses that we saw him practice with Brady during side sessions in training camp need to get dusted off and used again. This is a position that the team will need to address, and address in a big way next year, either through free agency or the draft, possibly both.

At the WR position, it seems obvious that N’Keal Harry “should” provide a big part of the answer. The Patriots invested a 1st-round draft pick in Harry and despite some of the bobos who are already asking if he’s a bust, he was supposed to be one of the best WRs coming out of the draft at getting his hands on contested passes.

He has the frame (6’4, 225) that is ready-made for working the same part of the field that Gordon was working earlier this season. He’s big, athletic and physical. He’s not going to stretch the field vertically but those side sessions with Brady during the summer had him working fades, back-shoulder throws, and quick outs and slants.

But he’s not going to be the focus on the red zone production. It is a lot, too much to ask of a rookie who’s been hurt and hasn’t played a down yet. He should see plenty of reps but then who will the offense lean on more in the red area? Mohamed Sanu.

Sanu has good size (6’2, 210) and should easily fulfill the Brandon Lafell role in the Super Bowl year. Sanu had 10 catches in just his second week with the team and caught a what? Yes, a red-zone touchdown last week. He and Julian Edelman will continue to work in and out of the slot and create some mismatches.

So getting Wynn back, adding Harry and putting more on Sanu and Watson’s plates should help to get the passing game going. In the running game, look for Rex Burkhead (if he can stay on the field) and James White to get more play in the running game in the red zone. That’s not blaming Sony Michel for the lack of production, but if they use the other two more, it gives them a more versatile look with the run/pass option where Sony is more run focused.

Is the Run Defense Vulnerable? Don’t Sweat It Too Much:

Oh my, after Sunday, social media had the “blueprint” to beat New England. The run defense was the Achilles Heel and the sky was definitely falling. “Can they win any of the next four games?” Take a deep breath folks and relax.

What we saw against Cleveland and then against Baltimore was scheme-related and is easily fixable. The Patriots against the Browns were protecting the pass playing a lighter front in an attempt to take away the pass and weren’t overly worried about giving up some yardage in the running game. Obviously, the long run that was fumbled by Nick Chubb was something that they accept, but that was more of a missed tackle(s) thing than anything.

Against the Ravens, the OL of Baltimore did and should get a ton of credit for being the more physical and dominant unit. But the coaching staff, something Bill Belichick said in his postgame comments didn’t put the defense in a good position to succeed.

The Patriots went to their 3-4 base and their interior players mainly Danny Shelton and Lawrence Guy who have both been outstanding this season were asked to two-gap against the Ravens running schemes.

Instead of zone running schemes that they normally employ, the Ravens attacked the gaps and the passive nature of the two-gap system was a poor choice and put their big men in a difficult position to win.

After the first couple of possessions, they switched things up and went to a four-man front and were attempting to penetrate and disrupt the running game by attacking it. That is the correct way to try to counter the powerful Ravens running game. Does it guarantee success? Of course not, but it offered a better way.

Instead of having Jamie Collins as an outside linebacker, where he got overplaying the running game early, he was moved inside with Dont’a Hightower and was asked to be a penetrator.

We know the NFL is a copy-cat league, the Eagles will try some of what we saw from Baltimore, and the Cowboys and Texans can definitely attempt more of the same. Something tells me that the coaches will have this figured out by next week in Philadelphia. The Eagles are running the ball a lot more lately as they take advantage of a heavier running package…we’ll have more of that next week when we do our pregame look at the matchups.

As it appears here, the issues they had were more scheme-related than a personnel weakness. And those are easily fixable. If there is anyone who can make changes on the fly and in mid-season better than Bill Belichick, we haven’t seen him.

That’s why they play the games…