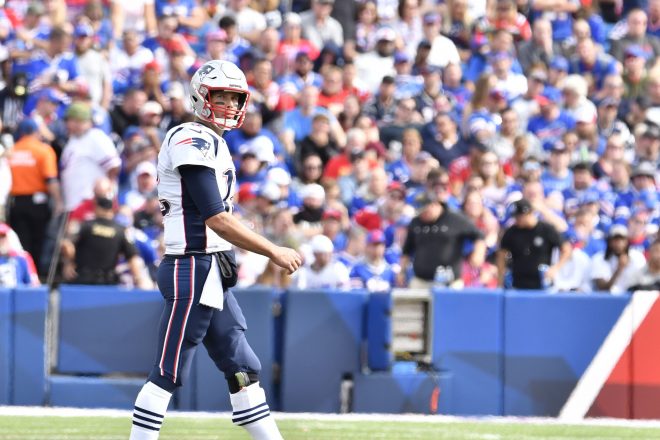 The Patriots traveled out to Buffalo to square off in a battle of 3-0 teams and were seeking their fifth 4-0 start under head coach Bill Belichick.

Check out some of the best sights and sounds from social media over the course of the game below.

A pair of unbeatens. A retired HOF coach (Marv Levy) to watch a future HOF quarterback bid for his 31st win over the @BuffaloBills. Coming up on @985TheSportsHub and the @Patriots Radio Network. pic.twitter.com/QBazH47ARu

This Brady stat made me lol pic.twitter.com/NSLBZJHYqE

Tom Brady today will start his 271st regular season game, 2nd most all time. If Brady start all remaining games this season and all 16 next, he'll overtake Brett Favre, 298, for the record in week 17 of 2020.#Patriots #NFL

Sean McDermott shooing a couple of Patriots staffers off the field who were watching the end of #Bills warmups.
McDermott appears pretty unhappy#BillsMafia pic.twitter.com/6CV8a0sOQc

In the first quarter, the Patriots jumped out to a fast start on all phases.

After intercepting Josh Allen, McCourty now has 4 INT this season – matching his total INT from 2015-2018.

I’d pay to see you doing this dance. https://t.co/nH2ZS2CZnh

A Brandon Bolden four yard run gave the Patriots the first points of the night, but kicker Stephen Gostkowski continued his early season struggles with another missed extra point.

13-0 New England after one quarter of play.

The coaches' film view of J.C. Jackson's blocked punt that led to Matthew Slater's TD, plus more from BB on the Belichick Breakdown. pic.twitter.com/Ui9nwsM92P

J.C. Jackson in the first quarter:
Block a punt: ✔
Intercept a pass: ✔ pic.twitter.com/BhYTsatWje

A rare Tom Brady interception in the end zone gave the Bills life just before halftime.

A Stephen Hauschka 46 Yd Field Goal cut the deficit to ten at 13-3.

In the third quarter, an opposing offense finally broke through on the Patriots stout defense as a Josh Allen opening drive rushing score made it a three point game.

From @ESPNStatsInfo: Bills' 3rd quarter opening-drive TD snaps a streak of 18 straight quarters for the Patriots defense not allowing a TD, including playoffs. 1st time an opposing offense has found the end zone since 4th quarter of the AFC Championship game last season.

A Stephen Gostkowski 23 Yd Field Goal pushed the lead back to six after three quarters in a battle between two strong defenses.

The fourth quarter saw zero scoring from either side, but the Patriots defense out-dueled the Bills.

A Josh Allen/Jonathan Jones collision knocked Allen out of the game.

Jones’ hit drew a flag but not an ejection nor suspension.

This angle shows why Jonathan Jones avoided an ejection. Trying to establish shoulder contact, neither lowered his helmet nor launched into Allen, and Allen is running forward with his helmet down. Perhaps an unnecessary hit, but Allen invited contact with the way he ran here. pic.twitter.com/eB2lKWZt7D

Bill Belichick on Jonathan Jones hit: "Jon turned when he hit him, he didn't lead with his head, he didn't have that posture." pic.twitter.com/xR1YAp2qjQ

The Patriots defense sealed the win when Kyle Van Noy came away with an interception of backup quarterback Matt Barkley.

A 16-10 Patriots victory marked the fifth time under Bill Belichick and first since 2015, that his team started a season 4-0.

The Patriots will head to Washington to take on the 0-4 Redskins on Sunday at 1pm.

The @Patriots have allowed 1 scrimmage TD in their first 4 games, tied for the fewest since the 1970 merger. (h/t @EliasSports) pic.twitter.com/aOd5PrqKVj

Next…. 4-0…. #next #anotherone #patsnation #Elite pic.twitter.com/8OqBEaxVvy

For the man next to you.