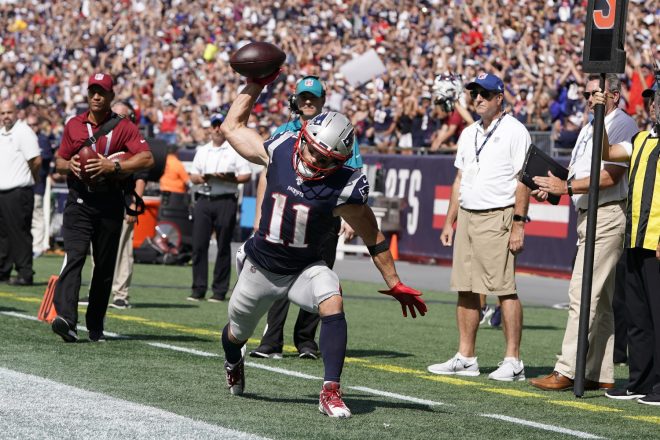 The Patriots entered week 3 against the New York Jets seeking their first 3-0 start since the 2016 season and continuing their defensive dominance to open the year.

Check out all the best sights and sounds over social media as it happened Sunday afternoon at Gillette Stadium.

The Patriots struck first with a Sony Michel 5-yard run to open the scoring.

A new game and more record climbing for Tom Brady.

Phillip Dorsett hauled in a 25 yard touchdown pass and the score was 13-0 in favor of the Patriots after one quarter.

In the second, the Patriots offense continued to roll as Brady found Julian Edelman and the Patriots entered the locker room up 20-0 at halftime.

At halftime the Patriots honored Ty Law in a special ceremony that you can see in its entirety below.

Law was presented with his Pro Football Hall of Fame ring.

The Patriots offense stalled a bit in the third quarter as injuries to Edelman and Josh Gordon kept the team out of the end zone.

A Stephen Gostkowski field goal pushed the lead to 23-0.

Gordon would return to field late in the third quarter and hauled in an incredible 3rd and long reception that setup Rex Burkhead’s two yard rushing touchdown and a 30-0 lead.

Just when it appeared the Patriots were on their way to a third consecutive shutout, Gunner Olszewski muffed a punt that lead to the FIRST touchdown allowed all season.

Arthur Maulet recovered the fumble in the end zone, and just like that it was a 23 point game!

At the start of the fourth quarter, Gordon continued his big afternoon, and Tom Brady scared all of New England to death when he attempted to block Jets safety Jamal Adams.

With six minutes to go in the game , Brady was replaced by rookie Jarret Stidham…until Jamal Adams picked him off for a 61 yard touchdown.

The Patriots lead was cut to 16 under 6 to go, but the Patriots special teams unit and defense made sure there would be no late comeback.