3 years ago at 10:15 am ET
Follow @IanLogue
Posted Under: Patriots Commentary 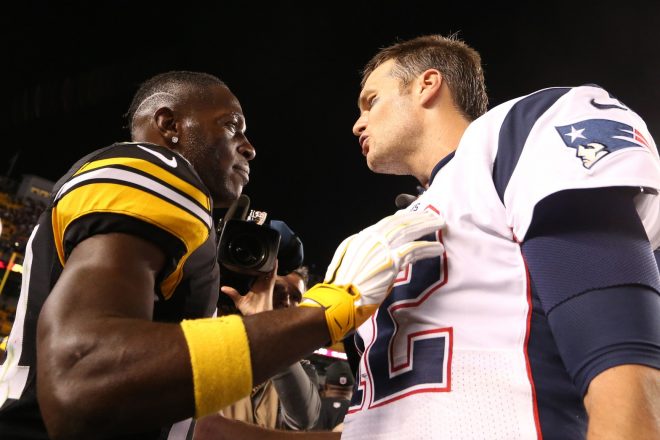 One thing Antonio Brown hopefully realized Sunday night is that there’s a stark difference between where he’s been and how Tom Brady and Bill Belichick do things in Foxboro.

Even more importantly, he needs to stay humble and do what he’s told because Sunday night’s beating of his former team should be a clear reminder that the team he’s joining is already pretty solid without him.

The former Steelers receiver created plenty of noise over the past month thanks to his antics in Oakland, which played a large role in orchestrating his way to being released and creating this opportunity. That’s been the topic of discussion for much of the weekend and Sunday night’s beatdown of the Steelers further poked the hornets nest full of the critics outside New England who are frustrated that they’ve added the superstar receiver.

But things will be different here in New England for Brown, who has normally been a player with enough leverage to call the shots since he’s generally been arguably one of the few best players in his team’s respective locker rooms. Here in New England, he’s instead surrounded by guys who collectively are all terrific players, making him just a piece of another potential championship-caliber Patriots team. The mantra here has always been “next man up” and one thing we’ve learned over the years is even when some of the most talented players have fallen, this team continues on and for the most part, doesn’t miss a beat.

As a result, what Brown needs to realize is that he’s fortunate to be here and that he needs the Patriots far more than they need him.

Sunday night should have proven that. With a chance to make a statement on opening night and potentially come into Foxboro and take control of the AFC, Mike Tomlin and the Steelers were shell-shocked against a Patriots team that completely shut Pittsburgh down and probably left a few players in the Steelers’ locker room wishing they could join Brown here in New England.

It was embarrassing, including one of the most notable moments of the night where, trailing 20-3 to begin the third quarter, Tomlin saw Pittsburgh’s offense come up with a 45-yard play that put them in New England territory. From there, they managed to fight their way down to the Patriots one-yard line and appeared to potentially be on the verge of getting back into the game. But instead of trying to instill some confidence in his club, Tomlin cowered and opted to settle for a meaningless field goal.

The Patriots responded with Tom Brady dropping a bomb on Pittsburgh just four plays later, hitting Phillip Dorsett for a 58-yard touchdown which seemingly blew up whatever was left of the Steelers’ confidence and also shattered whatever reasoning Tomlin may have had for that call.

Reasons like that are why Brown is probably glad he’s finally on the right side of things. But Sunday night should also be a reminder that the machine in Foxboro is already running quite well. Brady finished this one completing 24-of-36 for 341-yards and 3 touchdowns, even without the prolific receiver.

For Brown, his one job will be to potentially make it run a little more efficiently since even despite the 33-3 margin, there were clearly some plays that Brady would likely love to have back that could have made this one even more lopsided.

Needless to say hopefully Brown knows he’s lucky to be here, not the other way around. If he can stick to that realization and play football the way he’s capable of in this offense, 2019 should be a productive year for him.

If he puts in the work and does what he’s told, he’ll fit in just fine and there won’t be an issue. If not, Sunday night should be a reminder that unlike Pittsburgh and Oakland, Brown is now on a train that is running strong and certainly won’t have any issue kicking him off and leaving him behind if he acts up.

Let’s hope, for his sake, that won’t be an issue and he’ll make the most of this opportunity.