Here are some Patriots thoughts on this Monday morning:

1) One of the best stories coming out of this year’s training camp has certainly been the emergence of the defense, which seemingly appears like it could be one of the deeper and faster groups this team has had in quite a long time.

They’ve been impressive, with the ability to get after the quarterback having been a strength through two games. That success carried over again Saturday night down in Tennessee as New England put together another strong performance in their win over the Titans.

Overall, thus far, the’ve totaled 11 sacks, which is just 3 shy of what they finished with during last year’s preseason (14) and well ahead of 2017’s exhibition total (4). The only thing they haven’t done much of is force turnovers. They have just one interception so far, after having finished with five takeaways last preseason (3 interceptions, 2 fumble recoveries).

But it’s hard not to be a little excited at what could be in store for this football team this season and Saturday night’s game was yet another reminder of the potential this group has heading into the season. 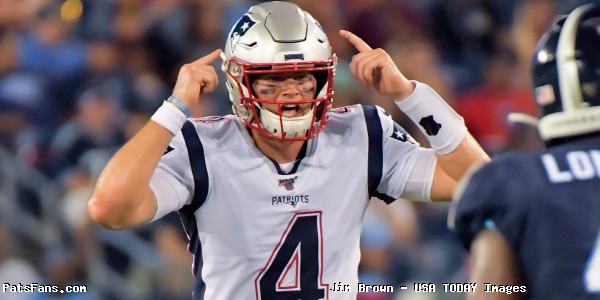 Stidham’s fast development has been a pleasant surprise.

2) That being said, one of the more interesting situations may ultimately be what ends up happening with the quarterback position after Jarrett Stidham’s performances through two games.

The rookie is 28-of-43 throwing the football with 372-yards passing with 2 touchdowns and a QB rating of 107.9. The latter stat ranks him 2nd in the NFL and he’s averaging 8.7 yards per throw, which also ties him for 2nd this preseason.

While it’s too early to get too excited, the bigger issue now could potentially see the team opt to take a chance on playing him behind Brady and open up a roster spot to address the depth they have on both sides of the football. Bill Belichick knows better than anyone that it’s a long season and injuries certainly happen, but Stidham’s recent growth could have just changed the future of another player who might have been on the outside looking in had Stidham not played as well as he has this preseason.

3) Another player who has also been a nice surprise is Jakobi Meyers, who finds himself 2nd in the NFL in receptions with 12 and tied for the league lead in touchdowns with 2. His 151 receiving yards are third-best in the league behind Buccaneers receiver Tanner Hudson (177yds) and the Steelers James Washington (162yds) and he’s been explosive to watch.

This has been mentioned before but given what we’ve seen from N’Keal Harry and now Meyers, along with Julian Edelman set to hopefully be ready to go in week one and the return of Josh Gordon, the Patriots could have one of the deadliest receiving cores in quite some time.

For a position that had a lot of question marks heading into this season, all of a sudden, the answers should have most fans pretty excited about what could be in store for this group this season. 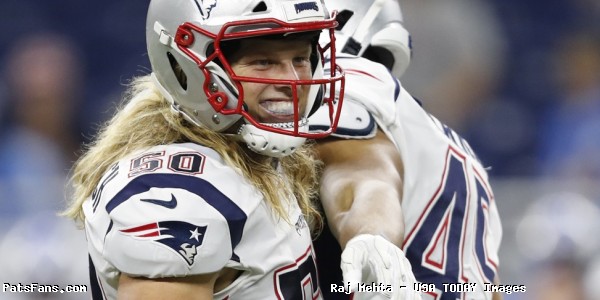 Winovich has had a terrific preseason so far.

4) Chase Winovich has been one of the most pleasant surprises this preseason and he’s certainly living up to the hype he received during the draft.

Watching film of him back then, even in college he was a player who plays with a ton of energy and emotion, which are two traits that make anyone at his position fun to watch.

He already has 2.5 sacks this preseason, which is second in the NFL behind Philadelphia’s Daeshon Hall (3.0). He’s essentially looked like the same player he was at Michigan and so far he’s carried his tenacity and explosiveness over to the NFL level. He’s worked hard this preseason and it’s obvious he’s going to be a player who the Patriots should be able to have success with. It may only still be August, but the future appears bright for the former Wolverine here in New England.

5) While the Patriots have spent the preseason with a punting battle going on between incumbent Ryan Allen and newcomer Jake Bailey, Saturday night’s game put the spotlight on kicker Stephen Gostkowski, who missed another field goal in as many weeks.

While Belichick has been one of the kicker’s biggest supporters, Gostkowski really needs to start settling in as the season approaches. Some will remember his difficulties in the Super Bowl, but a loss in his family the day before helped provide some context with that performance.

However, seeing him struggle again this preseason raises a red flag and one would hope he can start turning things around. It’s easy to make the suggestion of finding another kicker, but it’s a completely different story to actually find a reliable, consistent bad-weather kicker.

After a relatively good 2018, Gostkowski brought enough currency into this year to believe the kicker position shouldn’t be a concern. However, one would think these next two weeks will be important for him to start building some positive momentum heading into the season as the Patriots will need Gostkowski to be at his best heading into 2019.

The Patriots will play their first home preseason game of the year this Thursday night against the Carolina Panthers at Gillette Stadium.