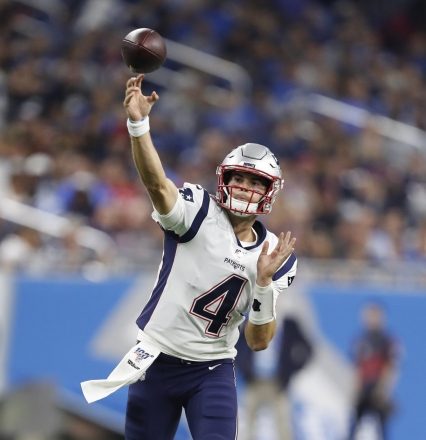 For the first time since their sixth Super Bowl championship back, the New England Patriots returned to game action in their preseason opener out in the Motor City.

Check out some of the best sights and sound from social media over the course of the game.

In the first quarter, the Patriots new-look defense showed their presence early.

Quarterback Brian Hoyer hooked up with rookie N’Keal Harry for a highlight first catch as a Patriot.

The Patriots offense got on the board first as receiver Maurice Harris hauled in a 14 yard touchdown reception from Hoyer.

7-0 Patriots after one quarter of play.

In the second quarter, Hoyer continued his hot start, finding Jakobi Meyers for his first of two touchdown hauls on the night.

The Patriots defense continued to pressure the Lions and John Simon forced a fumble in the process.

Rookie Jarrett Stidham entered the game for Hoyer and the offense continued to shine as Meyers again found the end zone.

20-0 New England at the half following a missed two-point conversion attempt.

The stats were ugly for Matt Patricia’s Lions.

Kicker Stephen Gostkowski missed a 37 yard field goal before the half…or was it Stephen Gostowski?

In the second half the Patriots picked up right where they left off, extending their lead to 28-0 early in the third quarter. A second two-point attempt was good.

One Lions fan had some unfortunate explaining to do after the game.

After three quarters and a four touchdown lead there was plenty of praise to go around for the 2019 Patriots debut.

Stephen Gostkowski tacked on a field goal to open the fourth quarter to push the lead to 31-0 and the Patriots defense did the rest to close out the evening.

The Patriots would go on to win their preseason opener by an impressive 31-3 final score.