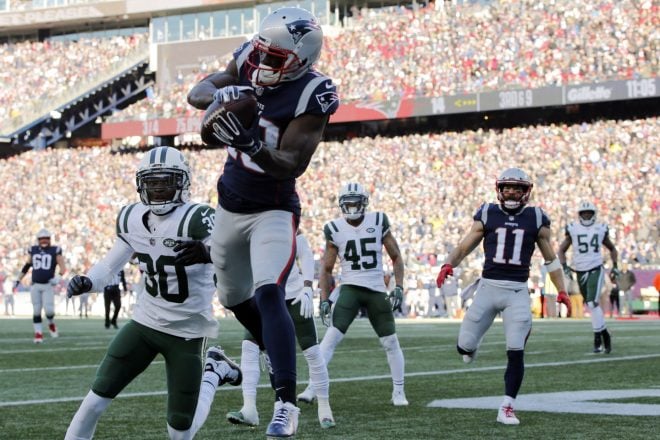 The Patriots are just in the infancy stages of building their roster and regardless of the big fish that got away in the hours and days before free agency even actually began, it is rarely if ever the way this team builds its roster.

The roster, as it currently stands will in no way resemble that which will take the field in Week 1 of the regular season nor at the end of the season. That especially will hold true for the Wide Receiver position.

We have seen the angst that many fans and media members have been feeling about the group of players that Tom Brady will be throwing to and rest assured, the team is not done addressing those issues. The team signed Bruce Ellington and Maurice Harris after bringing back Phillip Dorsett and while those two players aren’t the names that people were looking for, they will add depth to the roster and in the case of Ellington, he’s a guy who has had some degree of success against the Patriots a few times with the Texans. Bill Belichick loves to bring in guys like that.

So, with 12 picks, including six in the first 101 of the upcoming NFL Draft, the Patriots approach to building up more production and depth at wide receiver will probably be two-fold. They will most assuredly draft a wide receiver …or two in April. But they probably will try to swing a trade with a team that has a wide receiver on the final year of his contract, much like how they got Brandin Cooks two years ago.

So who is out there in the final year of their contracts? Let’s look:

A.J. Green, Bengals: With Cincinnati in the rebuild mode, Green who is now 30, is the name you’ve seen most circled as a “Patriots target” for a trade. It makes sense on a couple of points. Green is 30 and probably isn’t circled by the Bengals as being part of their longterm plans. He’s also been very productive in his career but has never tasted a playoff victory.

But Green to New England isn’t happening. Why? I can give you 15 million reasons why. That’s what his salary is for 2019. With the Patriots already strapped for cash, they need to re-do a couple of contracts anyway to get themselves prepared for the rest of 2019 and the draft. Bringing in Green without the Bengals eating a significant amount of his contract would put them in a huge bind… That’s a non-starter.

Tyler Boyd, Bengals: If there is a guy on Cincinnati, I’d rather have its Boyd. When he came out in the draft a few years ago, our 4th & 2 podcast member Derek Havens and I both really liked Boyd and thought he’d be a great fit in the Patriots offense.

Allen Hurns, Cowboys: Most people remember the gruesome injury Hurns suffered in the playoffs when his ankle was dislocated in the Seahawks game. Hurns is considered a very good teammate and a popular one in the locker room. He is expected to be fully healthy to take part in training camp and the regular season.

He didn’t have a great first season in Dallas with just 20 catches as he saw his playing time take a nose dive after the team acquired Amani Cooper. The Patriots could possibly pry him away as Dallas may opt for a slot receiver in the draft.

Laquon Treadwell, Vikings: Treadwell was thought to be the next great one when the Vikings drafted him in the first round #23 in the 2016 NFL Draft. But it has never materialized for him, he struggled to get production and was a healthy scratch in late December when the Vikes were fighting for a playoff spot. He had just 35 catches for 302 yards and a TD in 2018.

His cap hit is just $3,161,132 in 2019 with a team option for a fifth season. He’s not going to be picked up by Minnesota who have to deal with Stefon Diggs and Adam Theilen at the position. The question is, can Treadwell, who is just 23, turn his career around with a fresh start?

Sterling Shepard, Giants: Shepard plays both primarily in the slot and outside, and was thought to be possibly expendable with the Giants picking up Golden Tate recently. He caught 66 passes for 872 yards and four touchdowns in 2018. He’s in the final year of his rookie deal where he’s making just $1,891,464 in 2019.

Would the Giants let him go in a trade? It seems like the answer is no to that. Dave Gettleman, the Giants GM who has made some head scratching moves this spring, first by trading Odell Beckham Jr. and releasing Landon Collins, then signing Tate to a big money contract is saying their keeping both.

“Sterling played outside last year and did fine,” he said on a recent radio interview.” Will work well together with Tate.”

Shepard or Boyd remain the best case scenarios for the Patriots. Others like Emanuel Sanders of the Broncos is a very long shot. John Elway won’t trade him to New England. Another name to consider may be Josh Doctson of the Redskins. He’s another 1st round draft pick who thus far has been a bust in Washington. He’s never had more than six passes caught or gained more than 84 yards in any game thru his first three seasons.

Follow me on Twitter @SteveB7SFG or email me at [email protected]Listen to our Patriots 4th and 2 podcasts now on several apps as writers Russ Goldman, Derek Havens and I from PatsFans.com discuss the latest Patriots news and game analysis