4 years ago at 7:20 am ET
Follow @SteveB7SFG
Posted Under: 2018 Patriots Regular Season 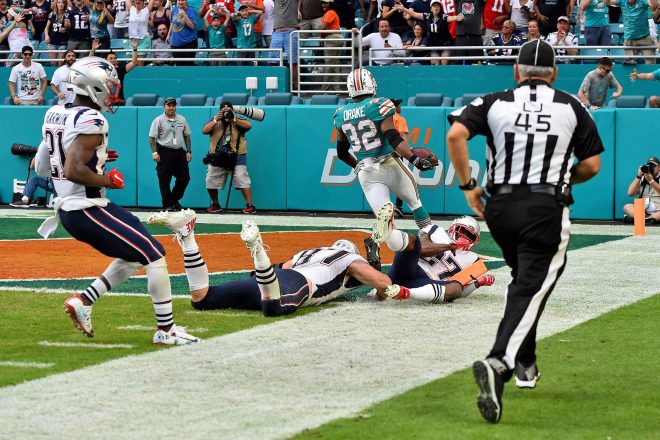 The Patriots went down to Miami and played just well enough to keep a very inferior team in the game long enough for them to steal away a victory on a fluke play on the last snap of the game. Like John Houseman used to say in those old Smith Barney commercials, “They earn it.” And the Pats earned that loss in a game that they should have won.

Some parts of the Pats game was outstanding, others were absolutely terrible. On both sides of the ball. That’s what a wacky game this was. They will get over this one…or perhaps they won’t. They don’t have a lot of time to dwell on it. A trip to Pittsburgh looms next week and don’t expect to see the same Steeler team that lost to the woeful Raiders next Sunday.

Tom Brady, save for one colossal mistake at the end of the first half was outstanding. Brady completed 27-43 passes for 358 yards (8.3 yards per pass) with 3 TDs and 0 INTs. His accuracy was very good throughout the game and those bogus hot take artists who regularly spew insipid bile about his arm strength need to watch back-to-back plays in the first half.

Facing a 3rd and 10, Brady lasered a rocket to Julian Edelman for 16 yards and a first down. On the next snap, Brady rocketed a 37-yard fastball down the field on a line where Cordarrelle Patterson made a nice grab for a 37-yard touchdown.

Brady’s one gaffe was a very costly one. With time running down in the first half, Brady held on to the ball too long with no one open and took a sack. At that point, the clock ran out and the Patriots lost a golden opportunity to add points on the board. It was a rookie mistake, he lost track of how many timeouts they had used and it is something, he’s never done. And it couldn’t come at a worse time. That’s what knocks his grade down somewhat.

Sony Michel had 20 carries for just 57 yards. He had one nice run at the end of the game that looked like the Patriots were finally going to take over but it was wiped out by a holding penalty. It has been a familiar refrain for him all season. He could probably have close to 50 percent of his yardage added to his total that has been lost on flags.

James White whether by the Dolphins defense or the Patriots game plan was invisible on Sunday. Granted Brady was shredding the Dolphin secondary but when the team goes just 3-6 in the red zone, perhaps, White could have been used a bit more. Rex Burkhead also was invisible, carrying four times for two yards with just a single catch for three yards.

James Develin was solid in his blocking and added another short touchdown run. But his penalty hurt at the end of the game.

Both Julian Edelman and Josh Gordon had outstanding games on Sunday. Edelman had 9 catches for 86 yards and a touchdown and as always he goes into those dangerous spots over the middle. His score was reminiscent of his TD catch in the Super Bowl against the Seahawks. He had a costly drop however where he began to run before securing the ball, a very uncommon mistake for him.

Gordon was outstanding and is looking every week like he’s getting better and better. He’s a monster on those quick, short slants where he uses his size and speed to get position and then is tough to bring down. He had five catches for 96 yards and added a pass interference call as well as a holding call.

Cordarrell Patterson had two catches for 51 yards including a beauty of a 37-yard touchdown. It was a perfect throw and a very nice catch as he stretched out and snagged the ball for the score.

Chris Hogan had only one target and Brady, under pressure overthrew it badly. It was a play we wrote about this weekend, the back of the end zone pass used to be a staple in the Patriots offense and that was one of the first times we’ve seen it in a long time. And it was open too.

Rob Gronkowski had a very good game, arguably his best of the year on Sunday. He was targeted eight times and made eight catches for 107 yards and a touchdown. He was taking some big hit and gave the Dolphins a lot of trouble in the passing game. They were convinced that they could cover him with single coverage. They were wrong.

Gronk deserves no criticism for the ridiculousness at the end of the game. He should have never been out there in the first place.

The offensive line did a tremendous job in the passing game, Brady was sacked just twice and they did a very good job of keeping the interior of the pocket clean where he could step up and throw the ball.

But in the running game? They were singularly awful. Remember this is a Dolphins team that has been gashed all year long but this was their third lowest total allowed. Only two games against the anemic Jets offense did they allow less. The running backs had nowhere to run on Sunday. This was a matchup the offensive line was supposed to win and should have. They did not.

The defensive line like the offensive line and much of the team was really good in one aspect and absolutely terrible in the other. Trey Flowers was once again terrific, he led the way with two sacks, two tackles for loss and four QB hits. And in the pass rush department, the defensive line had another strong game with 3 sacks and six QB hits.

But the Mr. Hyde part of the game was the run defense which was gashed. While that isn’t on just the DL (read below), they share in the grade as they were consistently pushed around in the running game.

The Patriots linebackers after their best game of the season against Minnesota had arguably their worst. They did do a good job of getting after Tannehill in blitzes with 1.5 sacks and a pair of QB hits.  Dont’a Hightower had his first sack of the season and John Simon was particularly effective in his best game in a Patriots uniform.

But in run support they were absolutely terrible, Miami rushed for 189 yards on just 21 carries which averages out to 9.0 yards per rush attempt. Brandon Bolden looked like Barry Sanders in his prime flying through open space for a 54-yard touchdown. No one could get off of their blocks. Elandon Roberts had a rough game, getting bulldozed on the Bolden first TD and then whiffing (how many times do we see this?) on an open field tackle attempt on Frank Gore. Hightower was fooled by Tannehill on the first series with a play fake where he ran for 13 yards.

The secondary took a step back from their stellar game of a week ago. Kenny Stills was giving Jason McCourty fits all game long until he was eventually replaced by J.C. Jackson. Gilmore was beaten by Brice Butler for a touchdown on a post route that was an excellently thrown ball by Tannehill. But the rest of Miami’s receivers had no more than one catch apiece.

But on the topic of the elephant in the room or in this case a Mastodon, there were breakdowns all over the field which all help create a play which will forever be a New England Butt Fumble moment. Another look at the play, (and it is like watching a car wreck) shows some horrible situational football.

Jonathan Jones is in perfect position to make the tackle and end the game since Miami has no timeouts remaining. But instead, he foolishly tries to make a play on the ball and is then, way out of position.  Jackson and Gilmore appear to be more worried about defending another lateral and run like their feet are underwater. Devin McCourty wasn’t on the field (the only snap he missed all game) and Gronk, who isn’t a defender (more to this below) stumbled trying to get the angle on Drake. Epic fail.

The Special Teams blocked two punts, Albert McClellan blocked both by rushing right up the middle. Ryan Allen’s punting was fantastic and the coverage units easily had their best game of the year. But Stephen Gostkowski’s two misses on easy kicks (an extra point and a chip shot 42-yard field goal) cost the team four points, which would have rendered the fiasco at the end moot. Nuff said.

The Patriots coaching staff which prides itself on not beating itself and good situational football failed on multiple accounts here. Why was Gronk in the game at all on that last play. With Miami back on its own 31, Tannehill isn’t throwing the ball 75+ yards in the air and even if he does, the team just signed 6’4 Obi Melifonwu who has a 40-inch vertical leap and can run like a scalded dog. It was unfathomable.

While the decision to go for the field goal was considered the “safe, smart” move, I’d have opted for another shot at a touchdown to put the game away and even if you don’t your forcing the Dolphins to start from inside their 5-yard line. Three points there doesn’t ice the game and you’re just giving them better field position to work from.

Just goes to show, Bill isn’t infallible, he can make mistakes. There were plenty of them to go around. We’re on to Pittsburgh…

Follow me on Twitter @SteveB7SFG or email me at [email protected]
Listen to our Patriots 4th and 2 podcasts on blog talk radio as the writers Russ Goldman, Derek Havens and I from PatsFans.com discuss the latest Patriots news.