4 years ago at 7:30 pm ET
Follow @bob_george
Posted Under: Uncategorized 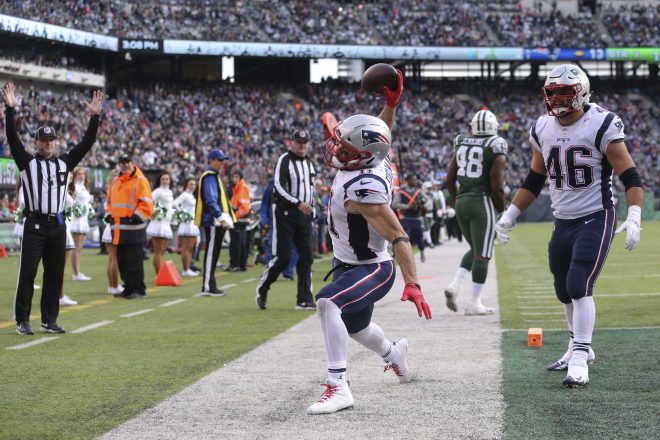 E. RUTHERFORD, N.J. – Two weeks ago, the Patriots were thumped at Tennessee, and a most welcome bye week happened.

After a week off of reflection, healing and resting, the Patriots finally got to play football again on Sunday at MetLife Stadium in the Meadowlands.  The Patriots still looked out of sorts, mostly in the first half, and committed a ton of penalties.  But thanks to an effective ground game, the Patriots snuffed out the New York Jets, 27-13 to move to 8-3 on the regular season.  With Kansas City (idle this week) losing that biblical Monday night game to the Rams, it keeps the Patriots in play for the top playoff seed in the AFC.

Tom Brady handled things well, and didn’t seem too uncomfortable throughout the game.  The only issue was not finishing drives in the first half, and watching his mates commit many penalties that wiped out good gains.  Rob Gronkowski and Julian Edelman had touchdown catches, with the big tight end catching his first scoring pass since Week 1.  Josh Gordon led the Patriots with five catches, and looks more and more comfortable in the Patriot offense.  Eight Patriot receivers caught at least one pass from Brady, always a good sign.

Michel could have had a lot more, but he had two nice carries in the second quarter wiped out on penalties.  A 25-yard scamper was wiped out on a holding call on Trent Brown.  Later, a 15-yard run by Michel was cancelled due to an illegal motion penalty on Cordarelle Patterson.  Michel also survived a scary injury sustained in the third quarter when a tackle by Mike Pennel bent Michel backwards, and he laid motionless on the ground for a few minutes.  Michel would return later and started a fourth quarter scoring drive with a 33-yard run off right tackle.

The officiating crew of Shawn Hochuli, son of former referee/lawyer/pontificator/gym rat Ed Hochuli, calls the most penalties of any crew in the NFL.  The Patriots were flagged eleven times for 105 yards, something that Bill Belichick will need to cover this week.  The Jets themselves also received eight penalties for 47 yards.  The numerous penalties prevents either team from getting into a rhythm and makes it hard for fans to watch, but credit the Patriots for overcoming all those flags and playing a generally good game.

If there was one area which greatly helped the Patriots, it was the disparity in team rushing yards.  The Jets only rushed for 74 yards as a team, with Isaiah Crowell leading the way with 30 yards on six carries.  The Jets actually did average 4.9 yards per carry, but Todd Bowles chose to try and win the game with backup quarterback Josh McCown leading the way, filling in for rookie/future franchise quarterback Sam Darnold.

McCown finished with 26 of 45 passing for 276 yards, one touchdown, one interception and a rating of 73.9.  Quincy Enunwa had 73 yards receiving, and rookie tight end Chris Herndon had seven catches.  A key matchup which went the way of the Patriots was Stephon Gilmore on Jermaine Kearse; even though Kearse had six catches for 66 yards and a touchdown, when Kearse was covered by Gilmore, Kearse was effectively smothered and McCown wound up misfiring the ball.

McCown and Brady are a combined 80 years old; this wound up being an unlikely creaky matchup at the quarterback position.  It in fact turned out to be the second oldest quarterback duel in NFL history.  Darnold is the unquestioned quarterback of the future for the Jets, so a Brady-McCown matchup isn’t something that NFL bards and scribes will write volumes of copy over.

Brady wound up with 20 of 31 passing for 283 yards, two touchdowns and a 115.4 passer rating.  Brady was never sacked and looked comfortable all game long.  He showed no signs of that double pass play in Tennessee two weeks ago where he stumbled after making the catch and hurt his back.  Brady had zero targets and zero catches in this game.

If there was one area other than penalties that the Patriots didn’t succeed in, it was dump passes to the running back and particularly to the left side.  On the opening drive of the second half, Brady took the Patriots very efficiently from the 25 down to the Jet 9.  On first and second down, Brady tried dump passes to White in the left flat on successive plays.  Avery Williamson and then Darron Lee blew up both plays for incomplete passes, and the Patriots settled for a chip shot field goal after using up about half the third quarter of playing time on the drive.  Brady found much more hay in seam routes and crossing routes rather than screen-related passes, a credit to the linebacker play for the Jets.

But the Patriots still prevailed in the end.  Next week, the Minnesota Vikings pay a rare visit to Foxborough in what should be a stiff challenge for the Patriots.  The Vikings are not the dominating team that nearly became the first home team in Super Bowl history last year, but they will still be a handful.  Eleven penalties won’t be a good thing against the Vikings, for example.

Bill Belichick was particularly upbeat in his postgame press conference.  Belichick loves coming back to where he formerly coached (both the Giants and the Jets), and coming away with a W always makes the former HC of the NYJ very happy.  He still holds great memories of his days as Giants defensive coordinator, as witnessed in that NFL Network piece.  Any win at Exit 16-W makes Belichick very, very happy.

And if you remember the shenanigans of the 1990s involving the green team, you the Patriot fan are happy, too.