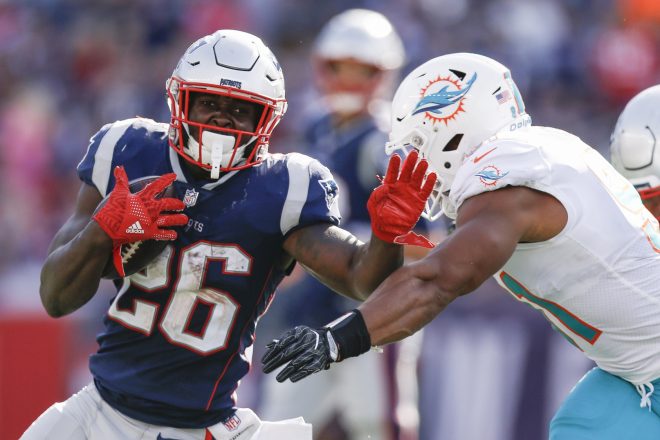 For one week at least, the Patriots have calmed the fears of fans of New England as they broke a two-game losing skid in dominant fashion, demolishing the not-ready-for-primetime Miami Dolphins 38-7.

On Sunday afternoon, Miami came in riding high at 3-0 while the Pats limped in at 1-2 and much was made of whether the Patriots defense, which seemed slow and unathletic would be able to keep up with the team speed of Miami. The defense answered the bell today and Miami never seriously threatened to score until a garbage time drive by their backup quarterback as New England dominated in all three phases of the game.

The Patriots won the physical game up front, both the offensive and defensive lines clearly won the 1-on-1 matchups as the Pats rolled for 175 yards on the ground, springing Sony Michel and James White for big chunks of yardage all game long, something that had been sorely missing for the past two weeks.

Michel who was foolishly labeled a draft bust by the hot takes crowd after just two weeks and after having missed all of the preseason rushed for 112 yards on 25 carries with a touchdown. White had 112 yards from scrimmage with 44 yards rushing, 68 yards receiving and had a touchdown rushing and receiving.

Defensively, the Patriots front seven stuffed the Dolphins on early downs, putting QB Ryan Tannehill in third and long situations all game long. Of course, getting two of their best defenders in Trey Flowers and Pat Chung back helped. We wrote in our pregame matchups that the defense had to get out of early holes that made third-down conversions easy. Tannehill faced third downs needing 12, 10, 10 (converted via penalty), 13, 8 and 24 yards in the pivotal first half. That is much, much better.

Miami was only 1-6 on third down in the first half, and that came as the half was winding down and the defense was giving them the underneath stuff.  By the time the first 30 minutes were over, the game was over with the Patriots going into intermission with a 24-0 lead.

Even more encouraging, the passing game got going against a very good Dolphins secondary. Tom Brady threw for 274 yards and three touchdowns but they got the big chunk plays that they’ve been missing. Brady hit Cordarrelle Patterson for a 55-yard touchdown, James White and Phillip Dorsett who caught a somersaulting 9-yard touchdown pass from Brady rounded out the scoring.

After having no success throwing to his wide receivers thru the first three weeks, they contributed 10 receptions for 166 yards. Hardly earthshattering numbers, but much better. And with the news that Julian Edelman returns on Monday, this should have an immediate impact on the passing game.

Newcomer Josh Gordon played only 18 snaps but did have an immediate impact. He caught two passes for 32 yards, both third-down conversions, and drew a penalty giving the offense another first down. But perhaps the best indicator from him was the nice block he made downfield on White’s 22-yard touchdown run. That is something the Patriots pride themselves on with the WRs and it is an early sign that Gordon is buying in.

The Patriots offensive line looked much, much better in springing the backs this week, and giving them the needed space to make the tough yards inside where they like to run and after the criticism, they’ve had to endure the past few weeks, this was a big, bounce-back game. Defensively, the line was penetrating, Miami had nowhere to run, with most of their 56 yards rushing coming long after this one was settled. Again in the pivotal first half, Miami rushed six times for seven yards.

The Dolphins had just 172 yards of offense, 75 of which came on the final garbage time drive led by backup QB Brock Osweiler where they scored with under three minutes to go. Tannehill, who entered the game completing 72 percent of his throws and with a passer rating of 121.8, completed just 11-20 for 100 yards with no touchdowns and an Interception.

Although he was sacked just twice, the Patriots had good pressure around the pocket all day where he wasn’t able to step into his throws all day. That’s why it seemed many of his passes sailed on him. His best throw was on the first snap of the game, where he drilled a 22-yard pass to Kenny Stills right between two defenders. That would be the Dolphins longest play of the day.

The Patriots defense allowed just 3.1 yards per rush and 4.3 yards per pass. Malcom Brown had a big bounce-back game as well as Dont’a Hightower. Lawrence Guy and Kyle Van Noy were particularly very good for the defense, who got solid contributions from everyone in the secondary, including rookie J.C. Jackson who got his first NFL interception on a pass that Tannehill underthrew a bit on a deep fly.

UP: Unlike a week ago, we could easily name several players here, and will add on to our three up just a tad this week.

Sony Michel: Imagine a rookie 1st round running back being labeled a bust after just two games when that back missed all of the preseason. Welcome to the world of New England overreaction sports radio. Michel looked much more comfortable in the Patriots offense this week and was showing more and more flashes of why the team thought so highly of him with a very solid performance.

Michel had 112 yards on 25 carries with a TD in the best game of his young career and quieted the critics for a week at least. As he gets more comfortable out there, his vision will continue to improve and we’re starting to see that burst he was so known for at Georgia.

James White: Last week, Tom Brady lamented that the coaches needed to get White more involved in the offense as he’s always a big playmaker. Mission accomplished. White had a typically big-play day with a 22-yard touchdown run and a 14-yard touchdown reception where Brady dropped a dime in the corner of the end zone as he was getting drilled.

Lawrence Guy: The big man inside is always one of the more underrated members of the Patriots defense and on Sunday afternoon he contributed big time to the overall defensive effort. The Patriots mixed up their fronts and at times, Guy shifted over to a DE spot and was outstanding, as the front seven was overall against the run.

Josh Gordon: His Patriots debut in front of a loud and raucous home crowd was just a small sample size (18 plays), but a successful one. His two catches were both on third down which signals that Brady wasn’t afraid to go to him right off the bat.

Both of his catches and a drawn penalty helped keep drives alive. He made a nice downfield block on White’s touchdown run and said all the right things after the game. So far, so good

Injuries: On a short week, with a game on Thursday night against the Colts, there are three injuries that need to be monitored. Rob Gronkowski, who was nursing an ankle injury before the game, left in the third quarter when he re-aggravated it.

Elandon Roberts who played a very solid, active game at middle linebacker left with looked like a fairly serious ankle or foot injury. Adam Butler was also injured in the second half and was on the ground in obvious pain.

Brady Decision Making: On what was otherwise a very good game by Tom Brady, he was victimized by the ball-hawking Dolphins secondary twice in the game, and both could be characterized by poor decision-making.

His first pick was actually a play where Brady was fooled by the Miami coverage. Bobby McCain was running with Chris Hogan on a deep post. Phillip Dorsett was supposed to cut inside Hogan for a deep cross. But McCain passed off Hogan to the safety and sat right in the throwing lane. He made a smart heads-up play for the pick.

On the second interception, Brady just got too greedy up 38-0 and tried to force the ball into tight coverage when he should have just thrown the ball away. It may be just a tad nitpicky here, but these are the kinds of mistake we generally don’t see from #12.