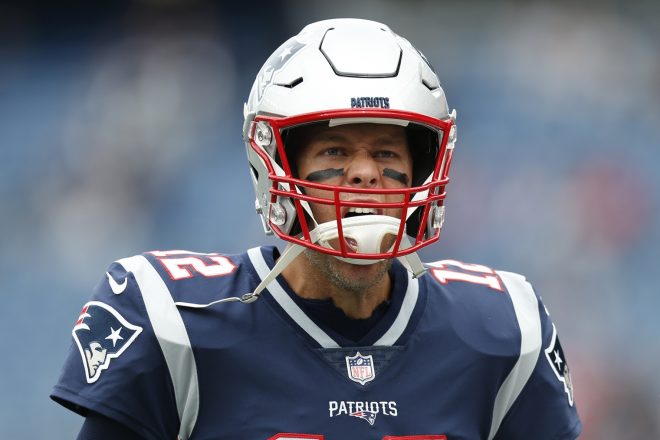 FOXBOROUGH – All you can take away from the preseason was Ja’Whaun Bentley and some guy named Ralph Webb. Other than that, what?

The Big Three in Patriotland are sniping. The empire is crumbling. Or so they said.

The Patriots had to open the regular season against a team with a terrific defense, a terrific young quarterback who torched the Patriots in Week 3 last year, and a bunch of ex-Patriot coaches who could have, if they put their mind to it, figure Bill Belichick out.

As things turned out, three things are clear. The preseason portended nothing. The supposed rift between Belichick, Tom Brady and Bob Kraft was overrated. And nobody really figures out Belichick, least of all branches of his coaching tree.

The Patriots opened defense of their AFC Championship on Sunday at Gillette Stadium with a workmanlike 27-20 win over the Houston Texans. The game was not as close as the score indicated, but a few uncharacteristic Patriot miscues kept the score close. The defense did a much better job against DeShaun Watson than they did last year, Tom Brady played a decent game, and the Texans looked foolish at times with some questionable in-game decisions.

The Patriots were able to overcome a Brady interception deep in their own territory (which was not really his fault as the ball was tipped at the line of scrimmage), the first lost fumble by Rob Gronkowski in six years, a muffed punt by Riley McCarron which helped Houston make the game close in the end, and a foolish personal foul on Duron Harmon on the final drive of the game which helped Watson throw a Hail Mary on the game’s final play.

Otherwise, the Patriots mostly controlled the game. The defense sold out in stopping Watson, allowing some long runs here and there but not having Watson torch them like last year. Watson finished 17 of 34 passing for 176 yards, a touchdown and an interception. His passer rating was 62.9. Watson also had eight carries for 40 yards, none of which hurt the Patriots. The Patriots managed to keep Watson in the pocket, and put pressure on him all game long. Watson was also sacked three times, which speaks to the improvement of the Patriot pass rush.

The intent on stopping Watson meant that Houston had some decent rushing stats. Lamar Miller had 98 yards on 20 carries, and Alfred Blue had 36 yards on five carries, including 27 yards on a third-quarter drive which he finished with a one-yard touchdown to make it 24-13 Patriots. The two backs combined for a 5.4 average per carry. The third quarter drive that featured Blue was the only time Houston seemed to eschew Watson’s skill set, and they scored a touchdown rather easily against the Patriots who were daring them to beat them on the ground.

Other than this drive, the Patriot defense did a good job overall. DeAndre Hopkins was held to 78 yards receiving on eight catches. Bruce Ellington had only 37 yards receiving. By putting constant pressure on Watson, the front seven enabled the secondary to have an overall decent game. Stephon Gilmore had a good handle on Hopkins, and hauled in the interception of Watson with an end zone grab while covering Vyncint Smith.

Offensively, the Patriots were mostly methodical, not spectacular, but played well enough to win. Brady found Gronkowski for a 21-yard first quarter touchdown, making the two the third most prolific quarterback-receiver combo in NFL history, passing Philip Rivers and Antonio Gates. But Gronkowski had a very uncharacteristic fumble in the opening drive of the third quarter, hauling in a 29-yard pass over the middle but allowing Kareem Jackson to strip the ball and Tyrann Mathieu recovering the fumble. The turnover did not hurt the Patriots other than keeping the scoring down, as Houston went for it on fourth down at the Patriot 17 but Watson misfired on a pass to Ryan Griffin in the end zone.

Brady suffered an interception in the first quarter. Trying to hit James White out of the backfield on a crossing route at the Patriot 10, the ball was deflected at the line of scrimmage and went behind White. Mathieu made the interception, giving him two takeaways on the afternoon. But Houston went three and out thanks largely to a sack by Trey Flowers and Deatrich Wise Jr., and the Texans settled for a field goal.

One area Belichick will be sure to address is kickoff coverage. Tyler Ervin had five returns for 156 yards and a 31.2 average. Kickoffs are designed many times for Stephen Gostkowski to pop up the kick so the receiver makes the catch at the goal line and then be forced to return instead of downing it for a touchback, with the intent on stopping the returner inside the 15. Ervin was never stopped on any of his returns, and the field position gains for Houston could have impacted the outcome had the Patriots not done such a good job on Watson.

Houston also hurt themselves with bad decisions at times. A questionable catch by Gronkowski late in the second quarter was not challenged, and Houston never called a timeout to give the booth a chance to review (it was with under two minutes left in the half), and the Patriots went on to score a touchdown. Down 27-13 midway through the fourth quarter, Bill O’Brien elected to punt from the 36 rather than go for it on fourth and eight at the Houston 36. Normally that decision ends the game except for McCarron muffing the punt and giving the ball back to Houston. They got their touchdown, but punting the ball seemed like a game concession. On the previous drive, facing fourth down and nine, the Texans tried an end around with Hopkins, but Devin McCourty stuffed it for no gain and Houston had to punt.

The Patriots open the season on a high note. Brady became the winningest quarterback on opening day in NFL history, passing Peyton Manning. He also became the winningest 40-year-old quarterback in NFL history, passing Brett Favre. In game one of Julian Edelman’s suspension, the Patriots looked just fine overall. Next week, the Patriots get Jacksonville and a rematch of last year’s AFC Championship Game, and another test against one of the stiffest defenses in the league.

This once again begs the question of the feasibility of the preseason. They don’t do it in college. Owners need those games because fans will still pay huge wads of money to see a meaningless game with no stars and no attempt at winning or any compelling drama other than jobs won or lost. It won’t mean the end of preseason games. But someone needs to try and at least cut back on them.

Because today’s win had almost nothing to do with the preseason. Ralph Webb? We once knew him well.

READ NEXT:
Patriots Down Texans 27-20 In Season Opener
Posted Under: 2018 Patriots Regular Season