4 years ago at 8:07 am ET
Follow @SteveB7SFG
Posted Under: Patriots Commentary 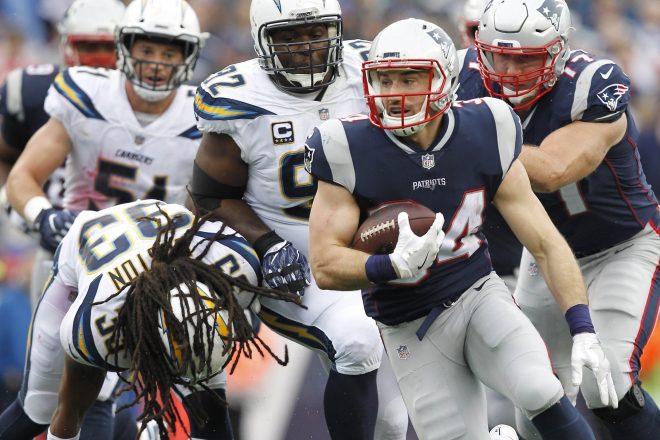 The New England Patriots open the 2018 regular season against the Houston Texans on Sunday afternoon and the conditions are supposed to be nearly perfect. The blistering heat wave that rolled thru the East Coast is moving off and it is supposed to be replaced by much cooler, drier air which brings a fall feel to the game.

The Patriots and Texans have faced each other often in recent years and very familiar with one another. In 2017, the two teams shared joint practices together before playing a preseason game and then met again in Week 3 of the regular season. Now they’ll renew the competition as each team has sights set for the postseason.

Although the Texans have never won in Foxboro, they are a team that gets great respect from the Pats. If you’ve ever attended a training camp session and watch those coaching assistants wave those big tennis rackets around when Tom Brady throws in drills? That is the J.J. Watt effect, because the uber-talented, but lately oft-injured defensive lineman has a penchant for knocking down passes at the line.

The Pats quarterback is entering his 19th season in the NFL and despite being 41 years old, looks as good as ever, winning the MVP of the league at 40 and then throwing for 505 yards against a very good Eagles defense in the Super Bowl.

Brady lost trusted targets in Danny Amendola and Brandin Cooks this offseason and then skipped the OTAs to spend more time with his family. Now with a wide receiver core that is thinner than what they’re used to working with, until Julian Edelman returns, all eyes will be on Brady to see if he can continue to keep the offense clicking.

Houston has a formidable pass rush and sacked Brady five times last year, with a new left tackle (Trent Brown) and a right tackle just getting off an injury (Marcus Cannon), the Texans will be looking to disrupt things and Brady will have to be sharp, move the ball around to multiple targets and get it out quickly. Brady takes a lot of the pressure off of his tackles by getting rid of the ball very quickly and this season begins with a big test to see if the rust is gone from a long offseason.

Dorsett was brought over from the Colts last year and was pretty much an afterthought in the offense for most of the year. With Amendola and Cooks gone, Edelman suspended for the first month, and Kenny Britt, Malcolm Mitchell and Jordan Matthews released, the onus of much of the wide receiver production is being pushed on his plate.

Dorsett began the summer hot and was looking like he was ready for the challenge, but as camp wore on, he faded a bit and wasn’t a big factor in the first two preseason games. That changed in the third game as he and Brady seemed to be working on their timing and chemistry against the Eagles.

Now the games are for real and a lot of eyes will be following Dorsett as the tries to be the go-to guy and a reliable chain mover for the Patriots offense along with Chris Hogan and the newcomer Cordarrelle Patterson.

The Patriots big middle linebacker is back and looks healthy after missing most of last season. While Hightower isn’t an All-Pro, he is for this Patriots defense and his absence in the Super Bowl had more to do with them losing than Malcolm Butler’s absence did.

Hightower will have to control the running game inside and help out when Lamar Miller or Alfred Blue try to stretch them to the edge or head out in the passing game. With the scrambling ability of Deshaun Watson, the Patriot defenders on the edge will have to contain the mobile QB and keep him in the pocket. If he tries to run up the middle, Hightower will be tasked with minimizing the damage.

Having the big, physical Hightower back in the middle of the field is a huge boost for a Patriots defense that was woeful against the run in 2017. Everything with a Bill Belichick defense begins in the middle. Having Hightower back where he belongs is a big first step.

The Patriots corner behind Stephon Gilmore has taken an undeserved bad rap from Patriots fans and will get a chance this season to erase a lot of those. With Malcolm Butler now in Tennessee, Rowe gets elevated to the top two slot. And despite the perception, he’s ready for the challenge.

The bigger, taller  (6’1, 205) Rowe who is beginning his fourth season has earned the right to be the starter. He had a very good spring and summer and fended off all competition from veterans and rookies alike to earn his way into the starters role.

This week he faces Will Fuller of the Texans who will play opposite DeAndre Hopkins and whose responsibilities fall to Gilmore. But an interesting footnote on Fuller, who is recovering from a hamstring issue and may not be 100 percent. Fuller and Watson developed a great chemistry last season. With both Hopkins and Fuller in the lineup with Watson under center, the Texans averaged nearly 40 points per game last year. Rowe’s season opener will have him facing a tough matchup. It should be a fun one to watch.

The Patriots brought back Burkhead this season after an injury shortened one in 2017. But there is no doubt when he was healthy and on the field, he was an integral part of the Patriots offense. That should not change in 2018 and in fact, his role may actually increase in the first month of the season with Edelman out.

Burkhead missed the Texans game last year after having a big game the week before against the Saints in the passing game. Look for Josh McDaniels to use Burkhead and James White as movable chess pieces in the backfield. The two will serve as slot receivers at times as they’ll put them in motion and try to create matchup problems.

In our key matchups, we said Burkhead may be the “X-Factor” in the game on Sunday. The Texans will be looking to put a lock on Rob Gronkowski and with him and the WRs clearing out some space, it could mean a big day for Burkhead.

The Patriots signed the veteran edge player this spring and he was expected to show the veteran leadership role that befits someone of his standing. Clayborn has been the consummate pro since arriving, always being one of the first players on the field and helping the younger players

The Patriots pass rush and their play along the edge in 2017 was a big issue all season. Now, by adding Clayborn to Trey Flowers and Deatrich Wise and getting Derek Rivers and Keionta Davis back from injuries that robbed their rookie seasons, the team is optimistic that they’ll be much improved.

But it all begins with Clayborn. He’ll be expected, and rightfully so, to lead the way on Sunday against a very good, young, mobile quarterback. It would do wonders for the confidence of a young group to get off to a good start this season.