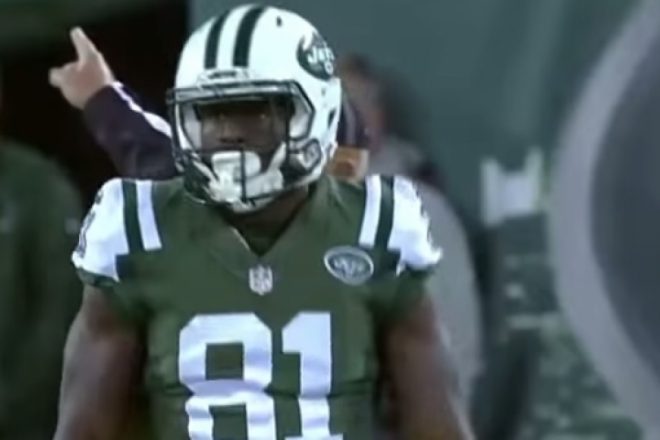 Is it 2010 or 2018? Raise your hand if you’ve heard this every spring for the last decade. “The Patriots are vulnerable this year, and this MAY be the year Team “X” dethrones them.”

Yawn, Rinse, Repeat. Yes, both the Jets and the Bills picked up what they are finally hoping are franchise quarterbacks this season and for teams that have been looking up in the standings for the past two decades in the AFC East, the spring is always one of hope.

In an interview on CBS Radio Friday, Quincy Enunwa told Brandon Tierney and Tiki Barber, the hosts of the show, that he believes the Patriots are “vulnerable” heading into next season. The Jets receiver later doubled down on SiriusXM NFL Radio. First Enunwa stated that he was merely responding to a question in that interview, but then couldn’t help himself and added that he sees no reason why New York can’t win the AFC East.

“Obviously, I just wanted to agree,” Enunwa said. “I think they may be. But I also think that we’re capable of finally dethroning them. I think that we’ve always been. It’s just about getting over that hump of finishing games. Not to add more bulletin board material for them, but I think for us, we’re hyper-confident and believe that we can do that.”

Hope is running high in New York, both in the city and in Buffalo where the Jets landed Sam Darnold as their quarterback of the future while the Bills drafted gunslinger Josh Allen from Wyoming as their own.

The Jets have really been searching for a franchise quarterback since the days of Joe Namath…yes that long. Darnold was expected to be the first player off the board during the 2018 NFL Draft but in a surprise move, the Cleveland Browns selected Baker Mayfield as their choice. Mayfield was the odds-on favorite to go to the Jets but instead, Gang Green had Darnold fall into their lap, with many considering him the top QB in the draft.

Will Darnold start this season? Not if the Jets are smart. They have an experienced bridge in place in the ageless Josh McCown. While McCown isn’t going to light the world on fire, he’s solid, will not give games away and can serve as a good mentor to Darnold. They would be best served to let Darnold learn the team’s offense and let him find his way into the NFL for his rookie season and not throw him straight out there.

Of course, if the Jets were smart, they wouldn’t be making statements like this, that we’ve heard every year it seems. Darnold may very well be the real deal and be a top quarterback for several years to come. But will he come into the league and light it on fire from Day 1? The chances of that are doubtful.

But he will have Enunwa who missed the 2017 season because of neck surgery. But the Jets wide receivers aren’t going to scare a lot of opposing team’s defensive coordinators.

Part of Enunwa’s confidence springs from the fact that it is widely reported that the supposed “rift” between Bill Belichick and Tom Brady has grown wider and that the relationship between the two is the worst that it has ever been.

The last game Brady played in? Without top wide receiver Julian Edelman who missed all of 2017, he passed for 505 yards against a very good Philadelphia Eagles defense. Edelman is back and they’ve added some other key pieces to the mix.

The Patriots aren’t going anywhere this season. They’ve won the division for the past nine years in a row in 15 of the past 17. Their consistency has been the hallmark of Belichick coached teams where it seems you can pencil them in for 12 wins a year. You want to knock them off, then step up to the table.

Hope springs eternal, especially this time of year. We get it. The Jets are excited, they have a new quarterback and the confidence to rise up and make people take notice. But do it on the field, not in the media. But after the Patriots bye week, the Jets will get their chance on November 25, the teams will meet for the first time in 2018.

Maybe Darnold will already be under center for the Jets. Then do your talking.