5 years ago at 9:05 am ET
Follow @SteveB7SFG
Posted Under: Patriots Commentary 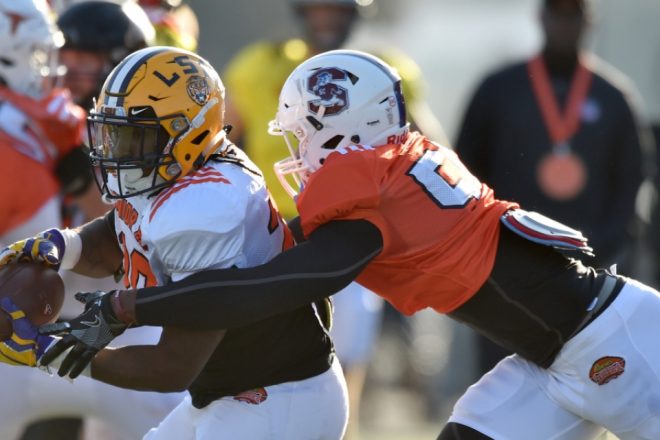 The Patriots are in need of an off-the-ball linebacker, one who can cover as well as come off the edge as a pass rusher. Last season the team lost Dont’a Hightower, Shea McClellin and Harvey Langi to season-ending injuries. McClellin was cut and will probably retire due to concussion issues. And depending on how they decide to utilize the other two either as edge rushers or linebackers will also factor in.

Right now the team has Elandon Roberts, Kyle Van Noy, Marquis Flowers, and Nicholas Grigsby on the roster. Van Noy and Flowers played key roles during the season, Van Noy especially, but the one area that really hurt them was running backs in the passing game.

Seven times during the season opposing running backs caught passes totaling 50 yards or more. During the Super Bowl loss to the Eagles, they were gashed by Corey Clement for 100 yards on four catches and a touchdown. So a dose of speed and athleticism is in the cards for the Patriots this spring at the linebacker position.

Darius Leonard from South Carolina State is a small school standout who definitely has the speed, athleticism, and instincts to play at the next level. Leonard was a standout high school player in South Carolina but got no love from either South Carolina or Clemson, (who offered him a walk-on chance). Rather than dwell on it, he used it as fodder to drive him.

Signing with South Carolina State, he strove to become a better player. “I used that as a little chip on my shoulder to show teams what they could’ve had,” he said. “I’m still that guy because I came from a small program, so I’ve got a point to prove.”

The 6’2, 229-pound linebacker had outstanding production for the Bulldogs in 2017 with 114 tackles, 12.0 tackles for loss, 8.5 sacks, one forced fumble, two passes defensed and two interceptions. Playing against top-flight competition in the Senior Bowl, he piled up a game-high 14 tackles.

He’s got the issues with he could use more muscle onto his lanky frame, which is already close to being maxed out. He could be more physical and won’t be a stout edge guy (at least initially) at setting the edge against bigger offensive linemen.

But his game is based on speed and athleticism, much like the league is going to today. He’s versatile and can play inside or outside as a 4-3 WILL linebacker.

– Good in both zone, man coverage

– Frame is almost maxed out

– May need a year of seasoning

Leonard would step into a subpackage coverage role from Day 1 as well as being an effective chip to blitz off the edge.

Yes, in Year 2 with time in the strength and conditioning program, he could become a very productive starter.

None, with McClellin and David Harris gone and James Harrison a free agent, there are already open spots for him to snatch up.

Conclusion:
NFL.com’s Lance Zierlein in his profile wrote that “Long and twitchy with athletic ability and straight-line speed that should light up the combine. Leonard has packed on the pounds since hitting campus, but it hasn’t compromised his play speed as he has posted dominant production throughout. He lacks play strength and there are times you want to see him play nastier in his field demeanor, but he has the traits and talent to become a good, three-down linebacker who can play 3-4 inside backer or 4-3 WILL.”

Leonard’s speed, athleticism, and instincts make him a very attractive  Day 2 prospect. He was the two-time MEAC Defensive Player of the Year, with outstanding speed and athleticism. He’s excellent at timing delayed blitzes and getting to the quarterback.

Leonard is versatile and can play inside or at the WILL linebacker role which he may be best suited for. He handles coverage very well and can cover a lot of ground. Watching him, he gets very good depth in his drops and can fly around from sideline to sideline to make plays. He is good in the running game with his ability to slip blocks.

He may take a bit of time to find his way in the NFL game and get some more playing strength but with the trend going to smaller, faster linebackers, he’s a guy whose arrow is pointing upward. He’s described as a “mature, respectful individual, an old soul” according to his coaches.

He answered the bell when the questions were asked about playing against top competition at the Senior Bowl and against Clemson (19 tackles) and can be a very productive player at the next level.

His tape at the senior bowl was put together by the Dallas Cowboys.