Good morning, here are Sunday’s Patriots news 8-21 and notes on what’s happening around the AFC East.

Trey Flowers Making Another Strong Push for Playing Time:
After a strong training camp in 2015, Patriots DE Trey Flowers made the 53-man roster but injury issues limited him to just a single game and he never truly got to show what he could do. Well, the 2nd-year player from Arkansas is showing that not only that the performance was not a fluke but is rapidly becoming a force on the edge.

With the injuries to Rob Ninkovich, Jabaal Sheard, and Shea McClellin this week, Flowers was thrust into a starting role opposite veteran Chris Long. Now playing against starters rather than backups, the result was the same. Flowers played very solidly again, he shared a sack with Anthony Johnson, batted a pass at the line and was a disruptive influence showing good power and moves in getting after the QB.

Chalk this up as a wait and see but hey, don’t look now Patriots Fans but … Marcus Cannon’s play at RT has been markedly improved lately, especially in the running game. Looks like the bringing back of Dante Scarnecchia is already paying dividends. 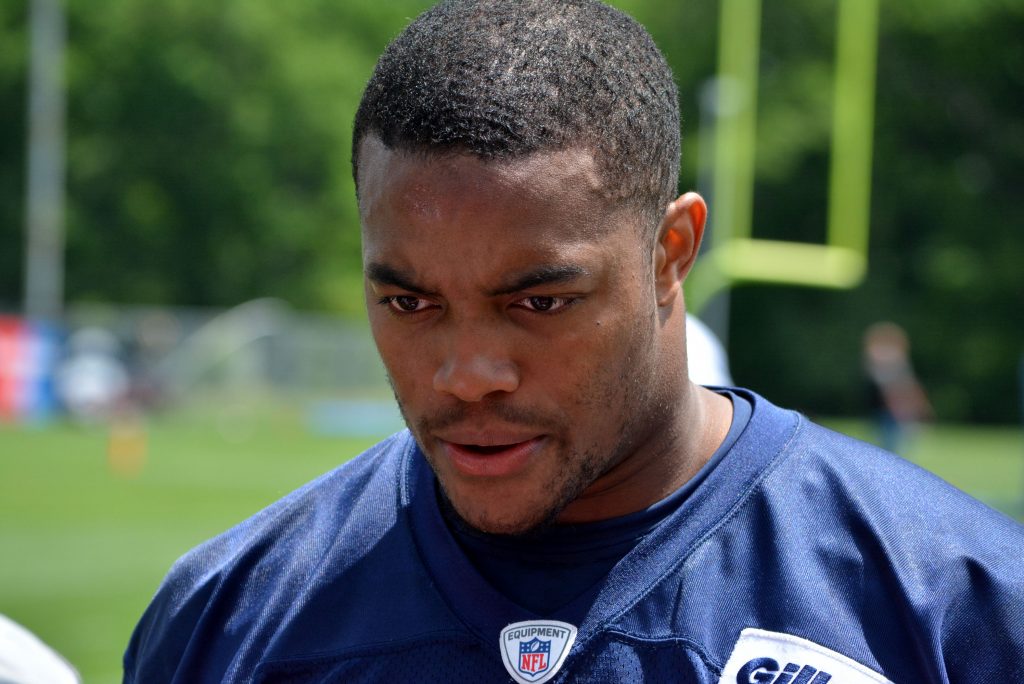 Joint Practices, A time for Player Evaluation:
One of the areas that the coaches always tout as a positive for the joint practices is the chance to further evaluate their players. Some of the fringe players or specific role players may get only a snap or two in a preseason game. But the joint practices allow the coaches to really see more of what these guys can do.

The other thing that the joint ventures do, and this is something that Bill Belichick has done a lot of in the past, is allow you to take a close look at the players of your opponent. A player that may not fit the scheme of your foe this week may be a key cog on your team the next.

I’d keep an eye on trades coming up, the Patriots are deep this season, so scouts from other teams are bound to be watching and seeing who gets cut loose and possibly working a deal for a player that fits their needs. Chicago, in particular, could be a prime trading partner again.

Clock is Ticking for Players on PUP:
The first two preseason games are in the books and the roster cut-down to 53 players is rapidly approaching on September 3. It is just a mere 13 days away, so the time for the players on the PUP to get either ready for the regular season or stay on the PUP for the first six weeks is nearing.

There is little time for evaluation for these players which will allow them to properly prepare for the season. So this may be a big week for guys like Danny Amendola, Dion Lewis, Sebastian Vollmer and Tre’ Jackson. If they can’t return to the team and start preparing for Arizona, will one week or less be enough? If we don’t see any of them by the time the team leaves for Carolina, I’d say that they start the season on PUP. Of all of those players, Amendola seems the closest to returning.

And what about the players who’s been banged up and are now far behind the power curve in terms of roster spots and playing time? Jonathan Cooper, Bryce Williams, Donald Brown and D.J. Foster have all missed valuable practice time and are in danger of losing roster spots.

Cooper who was brought over in the Chandler Jones trade is suffering from plantar fasciitis and hasn’t been seen since the first padded practice. Williams and Brown had early flashes in camp but are now on the outside looking in.

Roberts Takes a Big Step Forward against the Bears:
Patriots 2nd-year CB Darryl Roberts has been somewhat of a forgotten man this year at training camp. With all eyes on top pick Cyrus Jones and the talk centered around this year’s UDFA crop of athletic corners including Jonathan Jones, Cre’Von LeBlanc and V’Angelo Bentley, Roberts has been kind of an afterthought. 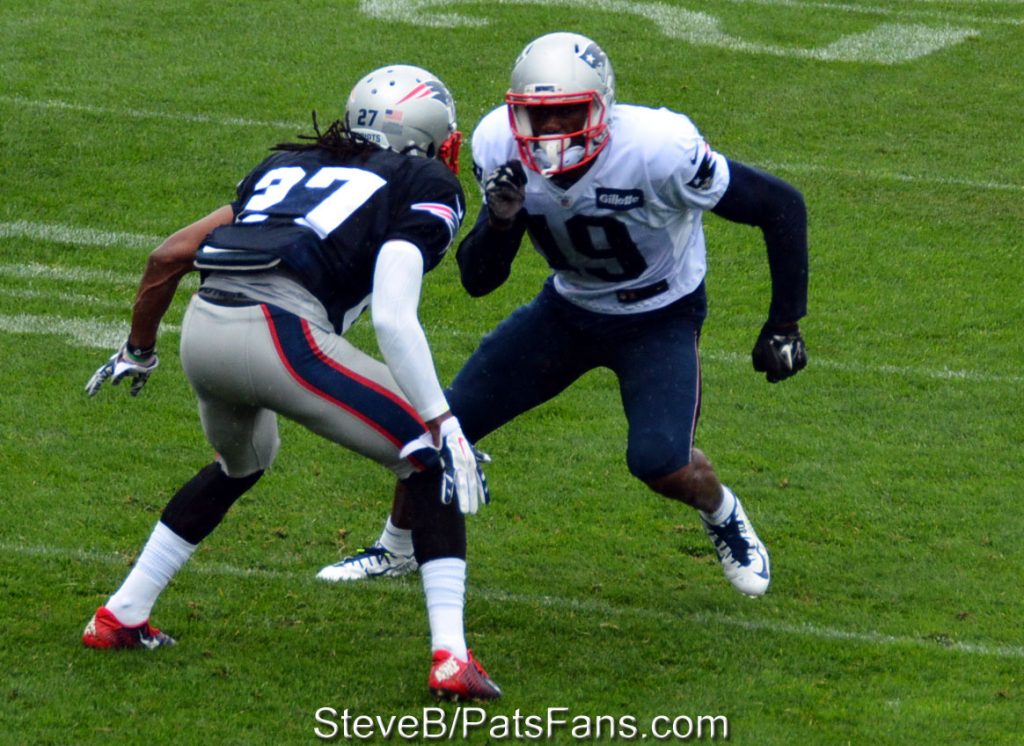 To be fair, the play of the Jones’ and LeBlanc has been better than his body of work thus far this summer. But all that changed on Thursday night. Roberts had …by far his best day this summer in the game against the Bears.

Roberts was targeted seven times against Chicago and gave up just two receptions for a total of 11 yards. He also was credited with three passes defensed and looked strong and physical out there. He got flagged on a ticky-tack personal foul call but that should in no way dampen the strong game he had. With the battle for the final corner spot still hanging in the balance, Roberts has again entered the fray. The final two weeks of practice and preseason games will tell the story.

Players Involved in Al Jazeera Probe Agree to Meet with the NFL:
The four NFL players implicated in the Al Jazeera/Charlie Sly doping scandal have all agreed to sit down with NFL investigators. While there is considerable pressure on these players to come forward, a cautious approach is what will work best.

These men are athletes, not lawyers and we all saw how the NFL manipulated, twisted and outright lied about Tom Brady’s “cooperation” and testimony. Pittsburgh’s James Harrison said it best when he thinks the media and video cameras should be allowed into the proceedings to record them.

The NFL said it had “more credible evidence” than just the Charlie Sly interview. But it refused to share it with the NFL Players Association. And it is unclear although doubtful that any of the players, (Harrison, Clay Matthews, Julius Peppers, Mike Neal) hired a team of investigators to descend on their former health clinic on a shredding, er fact-finding expedition.

Harrison is right…film every second of it, because it probably will get ugly.

Dolphins Defense Gashed by Dallas in Rout:
The Dallas Cowboys offense led by Tony Romo and rookie QB Dak Prescott shredded the Dolphins defense Friday night in a 41-14 loss at AT&T Stadium. And the worse part was that the Dolphins top unit was mostly intact when the Cowboys were doing most of the damage.

Dallas gained a total of 188 in three drives against Miami’s top defensive unit. Byron Maxwell, the Fins new top cornerback didn’t fare well against Dallas, allowing 8-9 completions for 125 yards and a touchdown. The Cowboys’ passers had a near perfect QB rating of 155.7 targeting Maxwell.

Worse, Alfred Morris, the former Redskins’ RB many thought to be washed up, rushed for 63 yards and a 7-yard average including a 15-yard touchdown run. It wasn’t a good night for the Dolphins defense, who need to turn things around in a hurry

Jets Starters Struggle in Sloppy Loss to Washington:
This week’s preseason game for Gang Green is one they’d probably like to forget and move on from as quickly as possible. The Jets starting units looked very sloppy in the 22-18 loss to the Redskins.

The starting offense suffered from drops and an uncharacteristic short-arm attempt by Brandon Marshall as QB Ryan Fitzpatrick went only 4-9 for 35 yards on the day. They fumbled on their second series and went only 2-11 on third down.

Geno Smith went 6-13 for 47 yards with a particularly terrible interception. Smith telegraphed a pass that was picked off, setting the table for a Skins touchdown. He is in danger of losing the backup QB job to Bryce Petty who has been outplaying Smith by most accounts during training camp.

More Bad News for the Bills, Dareus to Rehab, Williams Released:
The Buffalo Bills got more bad news this week, with the news that DL Marcell Dareus will be checking into rehab. Dareus recently was suspended four games for a violation of the league’s substance abuse policy.

“After careful consideration of recent events within my life, I have made the decision to enter a rehabilitation facility,” Dareus said in a statement. “I feel this is the best decision for me, my family and my teammates as I move forward with my career. I appreciate the support of my teammates and the Bills organization through this process.”

A year ago, Buffalo signed Dareus a seven-year, $103.2 million deal with $60 million guaranteed. He was supposed to be one of the team leaders and an anchor for the team to build around. Instead, those plans are on hold …for now.

The Bills released 2nd-year RB Karlos Williams on Friday, reversing course where just on Monday the team was voicing their support for the back. Williams whose weight ballooned up to 261 pounds during the offseason, played last year at 230.

He played in 11 games, starting three a year ago and gained 517 yards on 93 carries with seven touchdowns. He added a pair of scores in the passing game. His weight issues were blamed on his pregnant fiancé’s food cravings. His release was timed, according to the team, to allow him to find a new home. He will be suspended for the first four games of the season for a violation of the league’s substance abuse policy.
Follow me on Twitter @SteveB7SFG or email me at [email protected]

By: Ian Logue
Patriots news for Monday 8/8 along with some additional team notes.
10 hours ago